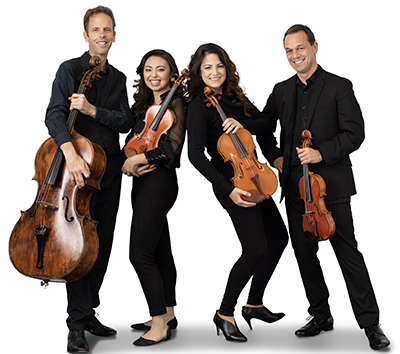 Distinct schools of thought emerge in any generation of musicians. Sometimes, this expresses itself in well-defined groups and ideological manifestos. In other cases, style comes before labels. When the Carpe Diem String Quartet visited Northeast Ohio last week, they brought not merely new music, but a recognizable approach that draws on certain corners of the classical tradition. Audiences enjoyed a concert of fresh fare that concluded with a Romantic mainstay — one that, in context, felt like a clear ancestor to the other material.

Within the broader American new music community, growing numbers of string players have embraced double identities as composer-performers. Beloved by soloists, quartets, and other string-based ensembles, these artists’ compositions play to their instruments’ strengths, evoking such reference points as 19th-century chamber works, the music of Ravel and Copland, and popular genres like jazz. This was the case in the first half of the program.

Violinist-composer Piotr Szewczyk’s To the Shore aims to capture something of the excitement and fear that early Spanish settlers must have felt when setting foot on the land they would rename as Florida. Cuban rhythms permeate the piece, and harmonies tend toward the clean and concordant. The Quartet paced things tastefully, not showing off until the series of swoops and swoons that conclude the composition — arrival on solid land as disorientation.

Sauer emerged as the ensemble’s anchor in cellist-composer Kyle Price’s Awaken, an ode to the non-visual sensations that signify home, his capacious, warm sound embracing those of the other players. Stylistically, the composition suggests that Price’s native territory is early 20th-century France, with strong hints of Ravel and Poulenc. A quotation from Bach made a strong impression.

The most vital piece of the first half came from within the ensemble. Fujiwara completed May Basket this year, and Monday’s concert featured its debut performance. From the mysterious ascent at the beginning through the gorgeous resolution thereafter, and from the calmer middle to the vigorous end, Fujiwara’s piece stood out. Ishikawa cascaded and flowed with lovely tone in a solo clearly intended for her.

Freewheeling to the point of musical incoherence, pianist-composer Bradley Sowash’s Septendecim nonetheless gave the players a chance to show off their commitment to jazz- and blues-influenced gestures.

Wetherbee and Ishikawa converged in beautifully unified and tuned harmony in the Allegro of Dvořák’s Quartet in G. Supplied with lush chords in the Adagio, the Quartet achieved perfect balance and texture. Sauer and Wetherbee each had moments to excel as soloists in this slow movement, and the first violinist showed off his high register in the Scherzo. The players are experts in the sudden surge that signals the final minute or two of any given piece, and with their well-paced finale, they earned the warm ovation that followed.