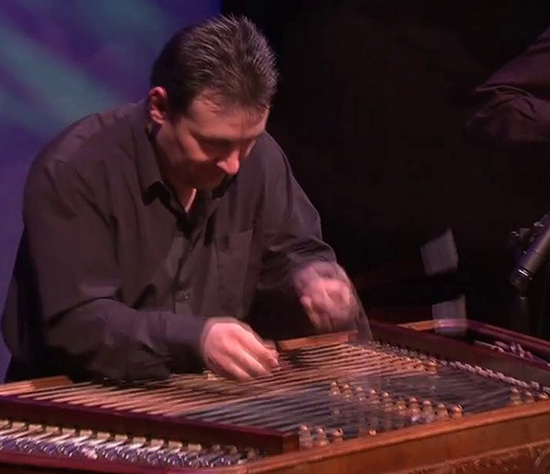 The music of Hungary occupies a unique place in the world of classical music. Musicians active between the mid-1800s and early 20th century understood the nation as either a land of best-kept secrets and hidden musical diversity, or as a foreign wonderland where exotic dance tunes and virtuosic fiddling occupied a lonely throne. In a recent concert, cimbalom soloist Alexander Fedoriouk and members of The Cleveland Orchestra explored both sides of the old divide: the Hungary that one expects and the richer, stranger version as well.

The Rocky River Chamber Music Society presented the concert on Monday, October 14, in West Shore Unitarian Universalist Church. Not for the first time on this organization’s series, the number of attendees exceeded the number of seats. This left many standing, perching on their mobility devices, or sitting out in the hallway. Folding chairs appeared, but too few, suggesting an urgent need for a revised overflow plan.

Violinists Emma Shook and Katherine Bormann, violist Stanley Konopka, and cellist Martha Baldwin revealed their approach to Bartók’s Quartet No. 2 right away: this would be an exercise in carefully balanced builds and retreats. Shook, playing first violin, layered a glossy tone over the warm sounds that open the piece. Baldwin provided a supple spine for the group here and throughout. The sheer loveliness of one isolated folk-like passage summoned imagery of a garden glimpsed through darkness. Dissonances produced brightness of sound rather than clashes, and Shook’s light, fast vibrato sang out over the tension.

Bormann laid down a solid pulse for the rollicking second movement, and Konopka’s viola overflowed with the sound of rustic fiddling. Thundering low chords rang with enough intensity to make The Rite of Spring redundant, and midair pauses showed listeners just how well these players work together.

In the chilling finale, Bormann and Shook traded radiant solos. Hard not to hear as a response to World War I, the composition gives a group the opportunity to surge from quiet mourning to the brink of rage — an emotional cliff on which the players teetered before delivering some of the loveliest sounds of the evening.

Fedoriouk joined Shook and bassist Henry Peyrebrune in Monti’s Csárdás, the cimbalom player mostly taking a supporting role as violin melodies cascaded and soared. This balance would change as the trio moved through a set of unannounced pieces, listed in the program as Hungarian and Romanian folk music but interspersed with favorites from the classical repertoire.

In Brahms’ Hungarian Dance No. 4, Peyrebrune’s soft strokes underpinned music of majestic sadness. The next selection found Fedoriouk taking charge, intentionally drifting around within the group’s overall beat and creating irresistible hazes of harmony. His ability to play faster than humanly possible made this latter half of the program an edge-of-seat experience.

The cimbalom, as it turns out, can sound quite a bit like a Romantic piano, and Fedoriouk wrung profound angst from another unlisted selection. Brahms’ Hungarian Dance No. 5, listed on the program but played as an encore, buzzed with rock ‘n’ roll energy, propelled by the low strings of his instrument — suddenly sounding like an electric guitar.

END_OF_DOCUMENT_TOKEN_TO_BE_REPLACED

The strings-only work by Berg has made relatively frequent appearances on the Orchestra’s programs. In 2021, the musicians recorded it for the In Focus series, and it appeared again on last year’s European tour. Friday’s rendition maintained the group’s characteristic light and effortless playing, each section blending as much as possible to echo the work’s original form as a string quartet. At fifteen minutes total, the piece is quite short, but the dense encoded musical meanings require some extra-attentive listening. Splitting up the three movements ensured that each one could be appreciated on its own. END_OF_DOCUMENT_TOKEN_TO_BE_REPLACED