The recital begins with Beethoven’s An die ferne Geliebte, a work that deserves a special asterisk in the repertoire of this duo and couple: they read through it on their first date. (As Diaz-Moresco said by telephone, they also sang Schumann’s Dichterliebe. He laughed, adding that things have happily turned out better than they do in those poems by Heinrich Heine.)

Asked about that first time reading music together, Myer said in a separate phone call that he remembers an instant connection. “And that’s kind of how our relationship has been the entire six years. Everything has just been easy and natural, and I think that comes through when we perform together as well.”

“It’s very easy,” agreed Diaz-Moresco. “He is such an amazing pianist, and we’ve been playing together for so long now that he can always sense exactly what I need. He knows what tempo is going to be good for me, and we don’t really have to discuss it.”

The baritone called An die ferne Geliebte a beautiful, intimate, and colorful piece. “We just think it’s a gorgeous way to open a program, and it’s a nice length, too. It’s about thirteen minutes long, so it’s substantial, but it’s not going to lose the audience’s attention. It’s an amazing piece, and actually I find that it’s not programmed very often.”

Next are Beethoven’s Andante favori in F, WoO 57, and Rondo in C, Op. 51, No. 1. “The Chamber Music Society requested that I bring some solo pieces, just because I’m sort of a hometown boy on the West Side of Cleveland,” Myer said. Adding more Beethoven was an easy choice because of the composer’s 250th anniversary year, and in order to connect with An die ferne Geliebte.

Beethoven’s shorter piano works, like these two, have long been on Myer’s radar, and they seemed like a perfect fit here. “I wanted something that wouldn’t be too long to fit in with the songs, which are all shorter pieces,” Myer said.

He also wanted a seamless transition to Debussy’s atmospheric Trois Ballades de François Villon. Not just any Beethoven would accomplish that. “But these are intimate and colorful — not outwardly passionate Beethoven, which is kind of in keeping with An die ferne Geliebte too. It’s not wild and crazy like the Fifth Symphony or the ‘Waldstein.’”

The Debussy is new for Diaz-Moresco. “I’ve studied it for quite a while, but I haven’t performed it yet,” he said. The third song, he noted, is devilishly hard for both the piano and the singer. “It has a really involved keyboard part, which again is one of the reasons why I love working with Spencer — I don’t have to worry if the rep is difficult for him because he can play it all.”

The second half is all American, beginning with Barber’s Three Songs, Op. 45. “They were written very late in Barber’s life and premiered by Dietrich Fischer-Dieskau,” Diaz-Moresco said. “There’s a wonderful recording of him singing them, and you can really hear that they were written with his voice in mind because of some big leaps and the really sweet spots in his voice that Barber gets at.”

The texts are each by a different author, all translated to English. “The first one explores the idea of being in between life and death,” the baritone said. “There’s imagery about when you’re buried but feeding the plants, so it’s very metaphysical. I think of it like the narrator is discovering themself in this state and exploring what that means.”

Surrealism abounds in the second text. “It’s this fantastic, delightful poem about a herd of pianos acting like animals,” Diaz-Moresco said. “And the last piece is about watching the sunset — seeing the sun fall behind the hills, and seeing the rays of light. It’s a beautiful send-off for the set, and I like that all three pieces are very different.” 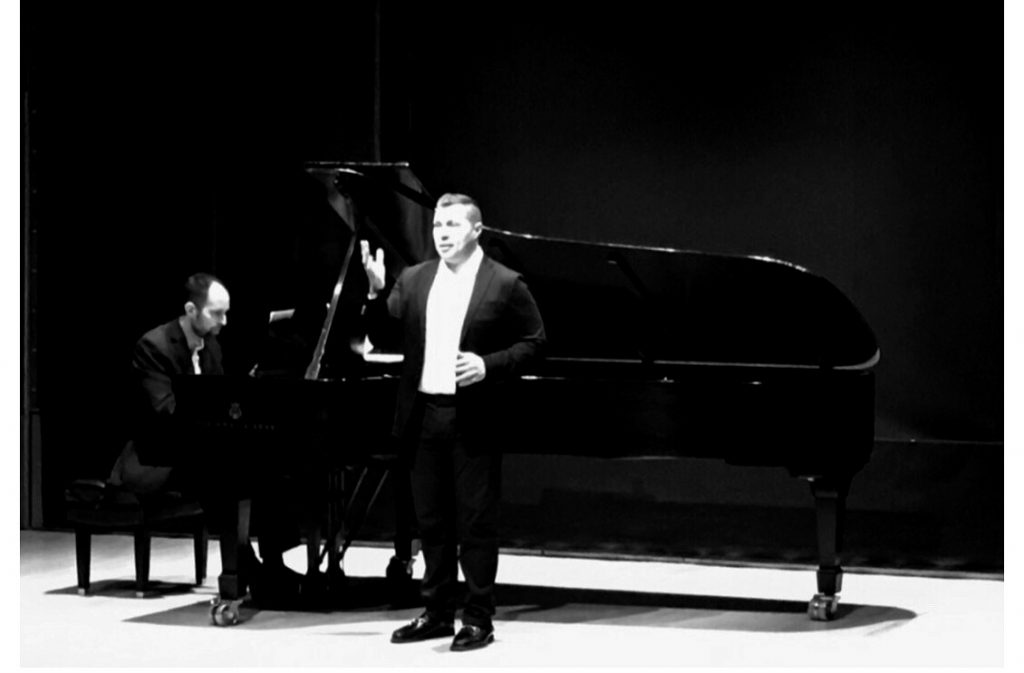 Before the finale, Myer will insert another solo piano piece: Barber’s Excursions, Op. 20. “He’s one of my favorite composers, period,” the pianist said. “I’ve played the Excursions many times and find them to be really accessible pieces, and just great music. They’re not as angular and gritty as his Piano Sonata, which I’ve also played a lot, but they’re terrific little gems.” The fourth movement is a hoedown, “which is always really fun for the audience,” Myer said. “And being a hoedown, it’s extremely Americana,” which makes for a nice transition to the selections from Bolcom’s Cabaret Songs.

Myer has spent a lot of time with the music of William Bolcom, having recorded sixteen of his rags on the Steinway label in 2017. “I was totally touched that when he first heard the CD, he really reacted positively to it and thought I captured his essence well. Like some of the Barber pieces, the rags come off very simple, seamless, and improvised, but they are so tricky.”

Diaz-Moresco noted that Bolcom wrote the Cabaret Songs for his wife, mezzo-soprano Joan Morris. “The way that she performs them is so iconic,” the baritone said. “She’s one of those theater animals. She has total command of the stage and the text in a way that is incredible.” To him, these songs, with texts by Arnold Weinstein, are truly character pieces. “And that is very much the case when Joan performs them: she’s a character actor up onstage inhabiting these stories.”

The evening’s finale is one of the most famous of the Cabaret Songs. “It’s essentially about a drag queen named George, but before drag was a thing. He invites people into his home and performs for them, kind of like a cabaret. And the whole thing is told through the lens of a friend of his.”

At one point, that friend reveals that George has been murdered. “George opens his door to everyone — he accepts and loves everyone — and then he’s killed by one of the patrons,” Diaz-Moresco said. Soon after that comes a line of text mentioning that George was a virgin, which the baritone said is often delivered as a joke. “But I think the point is that he was an innocent, and he was generous, so I play it very sincerely,” he said.

At the end comes a piano interlude with another ambiguous moment. “The stage direction is that the singer turns into George,” Diaz-Moresco said. “I go upstage and do a big turnaround — I had always seen it as a fun way to end the song.”

But a few years ago, he heard a different take on it from pianist Warren Jones. “Warren said it’s a kind of challenge to the audience, like saying, ‘I’m George — what would you do to me?’ That’s not the first interpretation that you would take away, but I think Warren was right. Everyone knows a George, and we all need to support each other.”

For songs in English, like the Barber and Bolcom, Diaz-Moresco said he always requests that presenters omit the text from the program book. “I think it’s important as a singer that I make a very strong effort for the words to be understandable, but also we want to get rid of anything that’s between us and the audience.”

Another rule the baritone likes to follow: keeping a cycle together rather than picking out individual songs. “With the exception of the Bolcom, all the sets we’re doing on this concert were meant to be performed as a whole.” He noted that in many cycles, the narrator from song to song is the same character. “And I think it’s more interesting for an audience to see the evolution of that character over several songs.”