The second half is all trios: Shook will join another Orchestra colleague, bassist Henry Peyrebrune, and cimbalom player Alexander Fedoriouk in traditional folk music from Hungary and Romania, and in works by Brahms and Vittorio Monti. A freewill offering will be taken.

The largest instrument in the hammered dulcimer family, as Fedoriouk expalined in an interview, the cimbalom is struck with wooden hammers to create sound. One feature that distinguishes the instrument from other dulcimers is its damper pedals, an innovation of József Schunda in the 1870s.

“In the United States, people know the cimbalom only by a couple of pieces,” Fedoriouk said, noting Kodaly’s Háry János Suite. “It’s used very sparingly in classical music, but in a traditional folk scene it’s a centerpiece.”

The cimbalom is extremely versatility in that genre. “I play melody, accompaniment, bass lines — you name it,” Fedoriouk said. “If I accompany a violinist, then I can play chord progressions like on a piano, and when I close down the dampers, it sounds very percussive.” 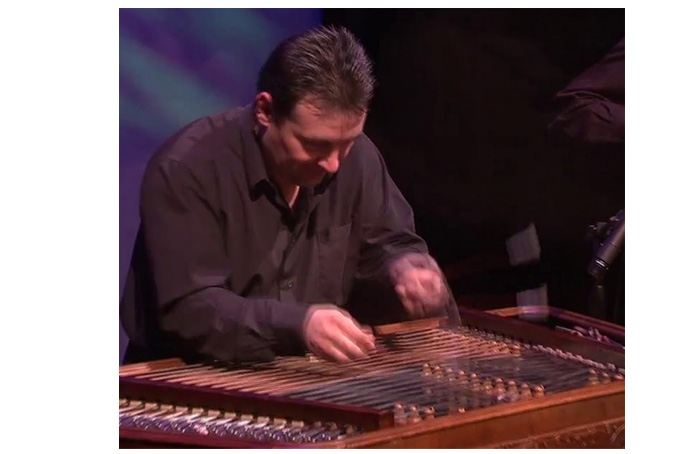 The bulk of what Fedoriouk, Shook, and Peyrebrune will play on Monday is folk repertoire that might have influenced classical composers like Brahms, Kodály, and Bartók. “These great composers heard traditional musicians playing these fancy melodies and accompaniment patterns, and those formed the basis for some of their pieces.”

The trio will also play Brahms’ Hungarian Dance No. 5 and Monti’s Csárdás. “That’s a very famous piece by an Italian composer,” Fedoriouk said, “but I’m sure it also had some influence from Eastern European and gypsy music.” He added that programs like this one, where listeners can hear folk and classical music side by side, are very valuable. “It gives people an idea of the roots of the music — where it came from.”

Speaking of genres intermingling — over the course of his fascinating career, Fedoriouk has collaborated with some names from the jazz and rock worlds that might surprise you. He performed at Carnegie Hall with multi-instrumentalist John Cale of the Velvet Underground, and recorded in Nashville with guitarist Nigel Pulsford of alternative rock group Bush.

“Pulsford had a list of songs that he would bring to sing with Bush,” Fedoriouk said. “They would say, ‘We like this song, but maybe not for this album.’ Everyone has their own list of songs they have in the can that they didn’t record or publish, so he would do his own projects.”

Another collaboration was with Herbie Mann for his 2000 album Eastern European Roots after the jazz flutist became interested in his heritage. “He went to see where his ancestors came from and fell in love with the folk music when he was over there,” Fedoriouk said. “He came back and wanted to do a recording where he would feature some instruments from Eastern Europe.”

That’s how he found Fedoriouk. “It was very interesting to incorporate Eastern European traditional music with improvisation and jazz,” the cimbalom player said. “It was a great experience because you grow as a musician when you collaborate with people from different genres. You learn so much, they learn so much. Sometimes it doesn’t work, but sometimes you get an incredible result.”

Jackson began the program with a recitation of Langston Hughes’ poem “Helen Keller” — the first of five poems by Hughes that served as interludes between each piece on the first half. END_OF_DOCUMENT_TOKEN_TO_BE_REPLACED

Pianos with pins and tape on strings, a bass drum and tam tam, crotales, Almglocken, and vibes. Microphones were hooked up all around the instruments. The feed was sent to speakers around the room. Lighting designer Nicholas Houfek hung incandescent globes over the arrangement of instruments from thin black wires stretching across the beams. END_OF_DOCUMENT_TOKEN_TO_BE_REPLACED

From the podium, Elim Chan set an ambitious tone for the evening. The rising star conductor, here in her Cleveland Orchestra debut, has a commanding style, and every twist and turn in Saturday’s performance tracked closely with her baton. END_OF_DOCUMENT_TOKEN_TO_BE_REPLACED