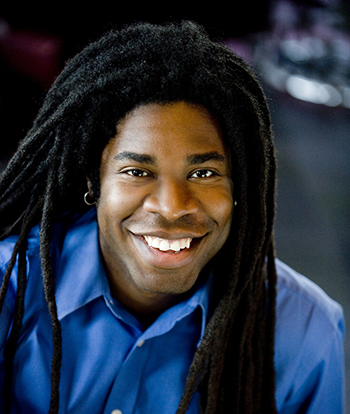 Bass-baritone Dashon Burton is no stranger to Northeast Ohio audiences — he has appeared with Franz Welser-Möst and The Cleveland Orchestra on three occasions over the last two seasons. This past fall Burton reprised his role as the Parson and Badger in Janáček’s Cunning Little Vixen and will return in May for Beethoven’s Ninth as part of the Orchestra’s Prometheus Project.

You can hear another side of the Oberlin alum’s vocal skills this week when he and his Roomful of Teeth colleagues perform on the Oberlin Artist Recital Series on Friday, February 16 at 8:00 pm in Finney Chapel. Tickets are available online.

“I’m so excited to be going back to Oberlin. It played a huge part in feeding my vast curiosity about what music can be,” Burton said during a telephone conversation. “Without the people in the TIMARA program and the composition and vocal departments, I wouldn’t be the professional that I am today. And I want everyone to come to the show and see what Roomful of Teeth is all about.”

But Burton’s journey to Oberlin was circuitous. A native of the Bronx, he had interests in astronomy and music education, as well as fencing, having started a club at his high school. When it came time for him to think about college, he said that like many 18-year-olds, he went looking for a place that could accommodate all of his interests.

“This was in 1999, so Google wasn’t what it is today, but my high school college counselor had a program where you could look for a college by typing in a few attributes that you wanted. So I did that and Case Western Reserve University was one of the places that popped up. I hadn’t heard of it and had no clue about its reputation, but when I found out I was accepted I was excited. Shortly after I arrived I dropped the astronomy and the fencing and honed in on music.”

While at Case Western, Burton was immersed in music education. “They have a fantastic program, but when I started to think about going into performing full-time I knew that I needed to change things up a little bit. I had been visiting friends at Oberlin and had a lot of contact with the professors. I enjoyed my time there so I thought, why don’t I give this a shot and see what happens? It was partly coincidental, but I had a lot of people open doors for me. I had wonderful professors at Case and when I thought about making this huge life change, people at both schools were incredibly supportive. I couldn’t have done any of it without them.”

Once at Oberlin, the young bass-baritone entered the studio of Gerald Crawford. “He’s now retired, but he was a fantastic teacher and has a number of students who are living full musical lives. I’m grateful to be part of that legacy and to have had his hand in my training.”

After graduation, Burton was invited to join Cantus, a professional men’s classical vocal ensemble based in Minneapolis, and remained with that ensemble for five years. In 2009, he entered Yale University’s Institute of Sacred Music where he received his Master of Music degree.

It was also in 2009 that Burton was introduced to the concept that guided the formation of Roomful of Teeth — expanding the chamber vocal music repertoire by reimagining the expressive potential of the human voice. Each year the eight-voice ensemble has gathered at the Massachusetts Museum of Contemporary Art, where they have studied with some of the world’s top performers and teachers in Tuvan and Inuit throat singing, yodeling, and Broadway belting, as well as other techniques.

“We want to say to listeners, here is an entire palette of sounds that people find beautiful and moving and use every day. One thing to remember is that within the ensemble, we are not all experts in some of these techniques. We bring in teachers from the traditions that we study so we can have as much authenticity as we can. While we’re trying these things in our own voices with the teachers there, the composers are in the room as well and can get a good sense of what is going on through that shared experience. That three-way collaboration makes for an incredibly rich experience.”

Burton said that being in the same room with the master teachers and hearing them demonstrate the different vocal styles is life-changing. “That goes back to the first residency in the summer of 2009 when we were working with Tuvan throat singers, a master yodeler, and an amazing belt coach. Sitting around the campfire and hearing these people is an experience I will never forget, and working with Roomful of Teeth is one of the biggest joys of my life.”

In addition to his performances with The Cleveland Orchestra this season, Burton will also sing Beethoven’s Ninth with the Handel & Haydn Society in Boston, the Royal Stockholm Philharmonic, and the Orlando Philharmonic. He will appear at Carnegie Hall with the Oratorio Society of NY for Handel’s Messiah and in the world premiere of Paul Moravec’s Sanctuary Road. He will also perform in David Lang’s The Little Match Girl Passion at the Metropolitan Museum of Art and revisit the role of Sarastro in Die Zauberflöte on tour with Opera de Dijon.

Burton says he is honored by the opportunity to appear twice with The Cleveland Orchestra at Severance Hall during its centennial season. “I have a wonderful time working with Franz Welser-Möst and everyone at the Orchestra. It’s a beautiful place to sing and I’m so happy to be able to continue that relationship.”

How does Dashon Burton feel about his time at Oberlin? “Everyone there had music in their hearts, both in the College and the Conservatory — and that exploded into everything they did. One of my favorite things about traveling is how many people come up to me and say, ‘I went to Oberlin.’ I always joke that we are absolutely everywhere! It’s a wonderful shared experience — a fantastic group of people who are helping their communities and doing amazing things both inside and outside of music. I’m thankful for my time there and the way it connected me with people who have helped me make this explosive lifestyle. When I’m on the road, I’m always grateful to meet people from Oberlin.”

You could see the relationship at work on a practical level. Repertoire for two players at the same piano requires a certain choreography. There’s just one of each pedal to share, and the hand crossings left and right — which can be so fun to watch a soloist pull off — get more complicated when another person’s involved. At times, Pompa-Baldi drew a hand away from the keyboard and into his body, making room for Friscioni, and at the close of a few delicate phrases, the two were crouched together over the same final notes at one end of the instrument. END_OF_DOCUMENT_TOKEN_TO_BE_REPLACED

The signature sounds of these famous film scores are not so much John Williams’ invention as allusions to other classical pieces. The foreboding half-step from Jaws, growing more and more furious in the cellos and basses, shares something with Dvořák’s “New World” Symphony and Bartok’s Miraculous Mandarin. END_OF_DOCUMENT_TOKEN_TO_BE_REPLACED

Unlike most concert pianists, who seem to have taken to the keyboard while they were still learning to walk, Kharitonov only began his studies at the age of 16. But he plays with such naturalness and easy virtuosity that you’d never imagine he came late to the party. END_OF_DOCUMENT_TOKEN_TO_BE_REPLACED

Each concert in “Beethoven and Beyond” includes two of LvB’s string quartets with a contemporary work in between, usually by way of contrast, although in her introductory remarks, primo violinist Annie Fullard drew thematic connections between the pizzicati in Beethoven’s “Harp” Quartet and Jessie Montgomery’s Strum. END_OF_DOCUMENT_TOKEN_TO_BE_REPLACED