“It’s amazing how professional choral singing has changed in the past 10 to 15 years,” Gregory Ristow, director of vocal ensembles at the Oberlin Conservatory, said during a recent conversation. “And the singers in Roomful of Teeth are the perfect model for our students because their careers are multi-faceted.”

On Friday, February 16 at 8:00 pm in Finney Chapel, the Oberlin Artist Recital Series will present Roomful of Teeth under the direction of Brad Wells. The program will include Caroline Shaw’s Partita for 8 Voices, Missy Mazzoli’s Vesper Sparrow, Judd Greenstein’s Run Away, and Toby Twining’s Dumas’ Riposte. The Grammy Award-winning ensemble will be joined by the Oberlin College Choir for William Brittelle’s Psychedelics and Merrill Garbus’ Quizassa. Tickets are available online.

Founded in 2009 by Brad Wells, Roomful of Teeth is a vocal project dedicated to reimagining the expressive potential of the human voice. Each year the eight-voice ensemble gathers at the Massachusetts Museum of Contemporary Art (MASS MoCA) in North Adams, Massachusetts, where they have studied with some of the world’s top performers and teachers in Tuvan throat singing, yodeling, Broadway belting, Inuit throat singing, Korean P’ansori, Georgian singing, Sardinian cantu a tenore, Hindustani music, Persian classical singing, and Death Metal singing.

Ristow said he is excited that his students will have the opportunity to interact and work with singers who are straddling so many different worlds. “Brad Wells was with us for two days in the fall for rehearsals of Psychedelics and Quizassa. We spent that time learning the vocal techniques. I’ve been practicing throat singing and I can sort of do it, but we’ve got some people in the Choir who can really do it and that’s been fun to see.”

How have the students reacted to learning these techniques? “We haven’t done this kind of vocal music with the College Choir before, but they’ve taken to it well. As a school, I think we attract students who are interested in being at the cutting edge of music, and Teeth is the definitive example of that.” 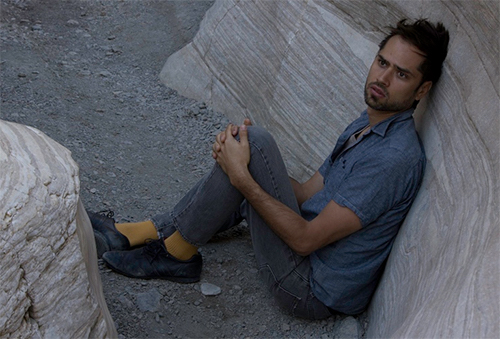 In addition to Friday’s concert, members of Roomful of Teeth will present professional development sessions that are free and open to the public. On Thursday, February 15, vocalist, violinist, producer, and Pulitzer Prize-winning composer Caroline Shaw will hold a Q&A session at 2:00 pm in Kulas Recital Hall. At 4:30 pm that day the Ensemble will conduct a Composition Forum in the Birenbaum Innovation and Performance Space.

We reached composer William Brittelle by telephone to ask about his composition Psychedelics. “I’m a reviser so this piece has had different premieres. It was originally performed with the Williams College Concert Choir who commissioned it a few years back with Roomful. Then we did a new version at Vanderbilt about a year ago, and for Oberlin it is a further revised version.”

When Brad Wells approached Brittelle about writing a large-scale work for the Ensemble and choir, the composer knew he wanted to integrate some of the techniques he had worked on with Roomful at their Summer Institutes. He said the work’s original text focuses on a time in his life when he was experiencing emotional distress. “I knew that Vanderbilt had signed on for this project. That’s where I went for my undergrad, and where I went through that period, so it was like a return to the scene of the crime for me.”

Brittelle said that although he is not a singer, in a former life he did sing in a rock band which led to vocal damage. “There was a time when I couldn’t talk or sing. But one of the reasons I love working with Roomful so much is that I love writing for voice. I was an extremely limited singer so it is freeing to work with them because they can sing anything.”

The composer was also on hand during the fall rehearsals with the Oberlin Choir. “They’re phenomenal and I think they really got the piece right away. It’s not easy and I think the pacing is very different from the choral writing they are used to.”

One of the techniques Brittelle includes in Psychedelics is Tuvan throat singing. “That’s where you are resonating an octave below the note that you’re singing,” he said. “That’s something that we worked on especially with the men. I’ve also written in what I think of as the traditional Bulgarian women’s chorus style, where you’re singing without any vibrato, with tight harmonies and a flat, wide sound. There’s also some yodeling, belting, talking, and traditional Inuit throat singing where you’re nearing each other’s sounds — a more guttural, rhythmic sound. Obviously, these are not standard choral techniques but the students were really open to that and very engaged. It was wonderful working with them.”

END_OF_DOCUMENT_TOKEN_TO_BE_REPLACED

The strings-only work by Berg has made relatively frequent appearances on the Orchestra’s programs. In 2021, the musicians recorded it for the In Focus series, and it appeared again on last year’s European tour. Friday’s rendition maintained the group’s characteristic light and effortless playing, each section blending as much as possible to echo the work’s original form as a string quartet. At fifteen minutes total, the piece is quite short, but the dense encoded musical meanings require some extra-attentive listening. Splitting up the three movements ensured that each one could be appreciated on its own. END_OF_DOCUMENT_TOKEN_TO_BE_REPLACED