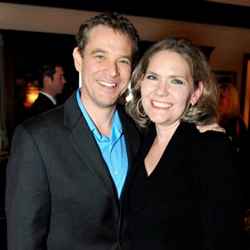 Inspired by their 2015 “Cancer Blows” benefit concert in conjunction with the Dallas Symphony, which raised nearly $1 million for research into the blood cancer multiple myeloma, trumpeter Ryan Anthony and his wife, Niki, are planning a benefit concert in Cleveland on Friday, May 20 at 7:00 pm in Severance Hall.

100% of the proceeds will go to the Ryan Anthony Foundation, which Ryan and Niki established in 2014 to support research into multiple myeloma.

Anthony, who graduated from the Cleveland Institute of Music, taught at Oberlin Conservatory, and was formerly a member of Canadian Brass, currently serves as principal trumpet with the Dallas Symphony. He was diagnosed with terminal cancer in 2013, but thanks to an autologous stem cell transplant, is in complete remission.

Tickets can be ordered online from the Severance Hall box office.

Not such a bad thing, as it turns out. “Building Bridges Together,” which debuted as a video production on November 21, combined the strengths of two fine Cleveland performing arts organizations in a beautifully edited virtual event — bringing them into the same performing space for the first time through digital means. END_OF_DOCUMENT_TOKEN_TO_BE_REPLACED