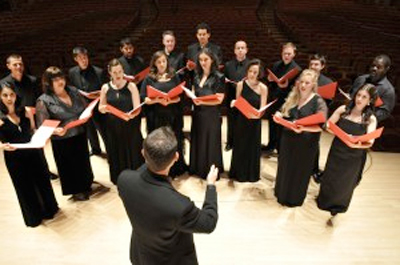 On Wednesday evening in Oberlin’s Warner Concert Hall, those angels happened to be mortals who hailed from South Florida, but the exquisite sounds that Patrick Dupré Quigley’s Seraphic Fire singers made could easily have overflowed from the banks of heaven.

The ensemble of thirteen voices, now in its second decade, began its 75-minute, straight-through program of spiritual music from Victoria to the twenty-first century with Maurice Duruflé’s Notre Père, Steven Paulus’s Hymn to the Eternal Flame and Tomás Luis de Victoria’s six-verse setting of Thomas Aquinas’s Pange lingua that alternates plainsong with polyphony. That’s an interesting set to be sure, but Quigley went one step further and strung the three pieces seamlessly together without pauses. Two bits of showmanship took a soprano soloist to the back of the hall for the Paulus and reconfigured the singers onstage during the plainsong verses of the Victoria, which were rhythmicized like conductus, the loping processional music of the middle ages.

In the first few moments of this arresting concert, Seraphic Fire distinguished itself as a ensemble of individuals who sing with supple, effortless tone and perfect blend, and produce pure, strong, ringing chords that can raise the hair on the back of your neck. They also sound completely natural and unaffected, and as the rest of the program proved, they can shift musical styles in the blink of an eye and individuals can step out of the ensemble and morph into compelling soloists.

Quigley broke the spell after Victoria with his first set of remarks between groups of pieces, to introduce John Tavener’s well-known The Lamb (William Blake) and the becoming-well-known setting of O Magnum Mysterium by Morten Lauridsen. The Tavener was admirably simple and unhurried, the Lauridsen quietly ecstatic (it incorporates the signature melismas that Lauridsen also uses in his Sure on this shining night).

Ingram Marshall’s Hymnodic Delays began as an electronic work that made loops out of three Bay Psalm Book hymns, Bright Hour Delayed; Broad Road; and Swept Away. Quigley got permission to transcribe the piece and Seraphic Fire cannily imitated those loops with human voices — quite a feat but masterfully accomplished.

In the same spirit, Seraphic Fire added to the program Elizabeth Poston’s Jesus Christ the Apple Tree, singing it first in its original Cambridge Hymnal Version (soprano section / solo on first and last stanzas, close harmony in the treble range for stanza 2, four-part harmony for stanzas 3 & 4), then pulling off another neat bit of stagecraft: during the last stanza, the ensemble circled the auditorium and sang the tune as a close-timed round, making the air ring with an agreeable, diatonic din.

Shifting to our own era, Seraphic Fire moved on to Shawn Crouch’s Pie Jesu from Road from Hiroshima, Jake Runestad’s I will lift mine eyes and Alvaro Bermúdez’s Padre Nuestro, visiting for the first two pieces modern cluster harmony and for the third, Latin dance rhythms (ending with a subtle soprano high C).

Then these visiting angels left the heavenly regions to contemplate them from below. The final set included a Bluegrass version of Angel Band complete with female trio worthy of a spot on A Prairie Home Companion; a stunning arrangement of the Battle Hymn of the Republic featuring an excellent, unnamed tenor; and an equally barn-burning, countertenor version of Dorsey’s Precious Lord featuring the phenomenal Reginald Mobley. For this final set, Patrick Quigley let his Baptist pianist alter ego shine out, and one of the singers suddenly produced a double bass to complete the effect. The audience was delighted to be invited to clap along (unlike some, Oberlin audiences know to do that on the off-beat!)

An enthusiastic standing ovation was rewarded with two encores: A rhumba and a version of In the Sweet Bye and Bye that served as a recessional as Seraphic Fire wound their way around the auditorium and disappeared through the lobby doors. You hated to see them go. This was a fabulous, flawless concert by an ensemble that can stand up to any chorus on the continent.