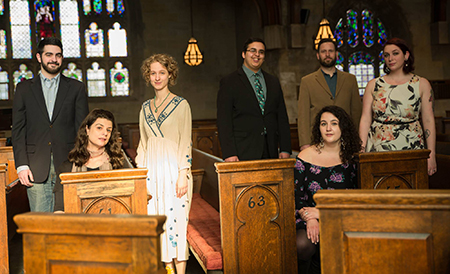 The Syndicate for the New Arts has brought a host of interesting artists and groups to the Cleveland area this summer, including the Buffalo, NY-based Sotto Voce Vocal Collective. On Saturday afternoon, June 9, the ensemble presented a dazzling program of not-often heard contemporary vocal music in the dreamy acoustic of Ohio City’s St. John’s Episcopal Church, the oldest-standing religious building in Northeast Ohio.

Their program got off to a breathless start with Part I of Kaija Saariaho’s Grammar of Dreams (1988) for soprano and mezzo-soprano. The two vocalists stood back to back as they oscillated between expressive, loud breaths and sweeping vocal declarations of the phrase “I am, I am, I am” from Sylvia Plath’s The Bell Jar.

Sotto Voce member and technician Alex Huddleston composed The Sonnets (2018), a piece for tape and voice on commission for the ensemble. The ever-present tape supplied constant white noise, while members of the ensemble sang from behind the audience in the organ loft. The work also features muffled vocal sounds “spoken” into a microphone from the front of the church, which had the effect of someone trying to communicate from underwater. All of the voices were eventually overtaken by the tape.

The program visited the 15th century with the anonymous Heu! Me Misera (Planctus), edited by Janthia Yearly. Soloist Suzanne Fatta delivered the main chant from the Mysterium of Tours, a lament for the death of Christ. Simultaneously, other women sang slightly divergent versions of a different planctus in a call-and-response format around her, creating an otherworldly sound. Fatta’s alto voice fit the grieving quality of the music perfectly. While the voices were indeed all singing different melodies, the work’s pitch discrepancies were still somewhat distracting.

Alvin Lucier’s Unamuno (1994) features the same chord repeatedly stacked in different orders for the entirety of the piece, as if searching for the perfect combination but never quite finding it. This reflects the quote from Spanish essayist Miguel de Unamuno that inspired the work: “My religion is to seek for truth in life and for life in truth, even knowing that I shall not find them while I live.” It was an enveloping performance.

The second half of the program opened in parallel to the first with Part V of Saariaho’s Grammar of Dreams, this time with the two vocalists facing each other and singing lines from Plath’s poem Paralytic.

Jamie Leigh Sampson’s Dite Me (2018), also commissioned by Sotto Voce, followed in a moving and all-too-relatable performance. The piece explores the oxymoronic state of remembering an old relationship — the simultaneous discomfort of bad memories and the comfort of familiarity. The harmonies evoke this tension beautifully, as the voices grow further apart in response to the repeated pleas, “Tell me” and “These hands are not mine.” The work ends with the repetition of the phrase “Freedom to sing through,” even as the ensemble’s sound and musical layers continue to deepen and darken. It was the strongest part of the program both in performance and musical content.

Brien Henderson’s Noli Esse Vana (2015/2018) was short but filled with meaning, each note and phrase purposeful and lovely. The afternoon concluded with German composer Marianne Schuppe’s vocal-exercise-turned-performance-piece der blumen (2017), performed by the full ensemble. It depicted a soft vocal landscape abounding with stacked, extended harmonies rising from the bass, an adventurous sense of tonality, and ample quiet space to hear the bird song coming in through the windows.

END_OF_DOCUMENT_TOKEN_TO_BE_REPLACED

Rodgers & Hammerstein’s Cinderella was originally produced for television in 1957 — seven years after the animated Disney film was released — and starred Julie Andrews. According to the Rodgers & Hammerstein website, it was viewed by over 100 million people. END_OF_DOCUMENT_TOKEN_TO_BE_REPLACED

The story line has its origin in an 1855 play and an 1842 farce that Thornton Wilder mined for his 1938 play The Merchant of Yonkers. When that turned out to be a flop, in 1954 Wilder made the crucial decision to re-center the show around the character of the legendary marriage broker Dolly Gallagher Levi and renamed it The Matchmaker. END_OF_DOCUMENT_TOKEN_TO_BE_REPLACED

The Dodero Center for the Performing Arts at the Gilmore Academy in Gates Mills is one feature of an impressive campus. The auditorium is shallow, the stage is deep, and the ensemble played without a shell. Throughout the program, the sound, especially in instruments’ lower registers, tended to disappear. END_OF_DOCUMENT_TOKEN_TO_BE_REPLACED