“This will be my fourth or fifth appearance with the Choir at Severance, and I love that hall,” Armstrong said in a recent telephone conversation from Northfield. “After our tours I always ask the singers which spaces were best and easiest to sing in, and for the last two tours Severance has eclipsed all the others. I’m a New Yorker, and when I step onstage at Carnegie Hall, I close my eyes and imagine Leontyne Price, or Ella Fitzgerald, or The Beatles. In Cleveland, I’m delighted to add our weave to a great tapestry that includes George Szell and Robert Shaw.”

Armstrong, who is marking his 30th anniversary as director this year, has chosen works that reflect St. Olaf Choir’s history, as well as contemporary pieces by composers who have strong relationships with the Choir. The multi-cultural program is divided into four sections — Songs for Praise and Rejoicing, Songs of Adoration, Songs of Justice and Compassion, and Songs of Love and Hope — and ranges in period from the Renaissance Jewish composer Salamone Rossi to Jordanian-born Shireen Abu-Khader, now based in Toronto. The Choir will be joined by a 12-piece chamber ensemble led by St. Olaf music professor Charles Gray. Click here to view the complete program. 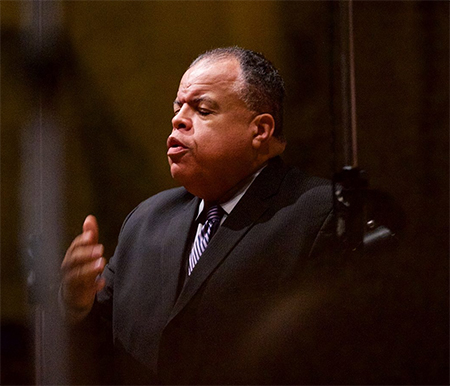 Asked how it feels after leading the Choir for three decades, Armstrong said, “I was 33 when I accepted this position, and I’m blessed and humbled to be in good shape and still be relating to a student generation that’s changing very fast on me. When you have students who were raised with rapidly advancing technology and expect to get instant success and instant answers, you have to teach a different type of life skill which these young folks are not always used to employing.”

That means teaching them patience, Armstrong said, especially in an art form where achieving excellence requires many hours and weeks of perseverance and dedicated work. “When they do come into that realm, there’s a great deal of personal satisfaction and fulfillment. But when things don’t go well — when they can’t sight read something instantly, or the conductor’s still not quite happy — it becomes a different kind of life lesson.”

Armstrong believes that one of the prime goals of teaching is to help students fend for themselves. “To nurture young people for independent lives has become more of a challenge in the last fifteen years or so. I’ve heard for years about helicopter parents, but this generation is also dealing with what I call snowplow parents who want to clear the way so their children never have to deal with any obstacles or any resistance.”

Music, and especially choral music, is an important source of nurture for young people, Armstrong said. “It’s a means of grace to reach them, get into their hearts and minds, and give them some very practical life skills. If they can make that transfer, they’re stronger for it. Singing the words and music of others that they can relate to is another way for them to become fully human. And all of a sudden those things that divide us — politics, socio-economic status, religion, whatever it is — have no place, because we’re working together for the common good. You could say that in athletics, too, but there somebody’s always a winner and somebody’s always a loser. When we practice our art in the most positive way, everybody wins.”

Finding music that his students relate to is also a challenge these days, Armstrong said, especially as the group becomes more diverse. In 1912 when the Choir was founded, the College was mainly populated by students of Scandinavian heritage. “Now, we have a rabbi and an imam in addition to two Lutheran chaplains, and although a majority of my students would claim some kind of religious connection, an increasing number are ‘Nones.’” 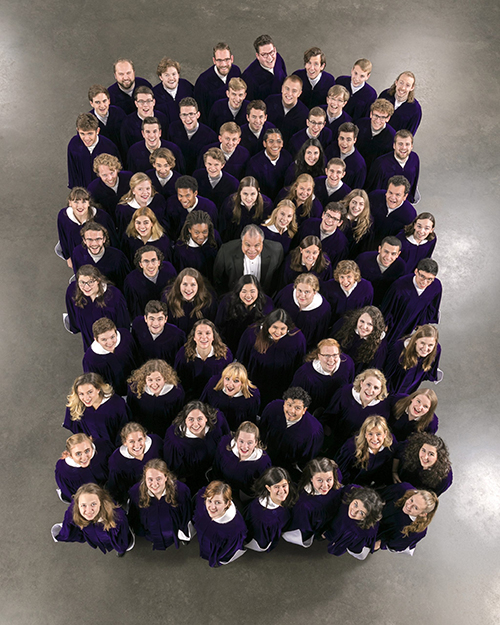 Thus Armstrong tries to get his singers to take some kind of ownership of the repertoire by showing and explaining the strengths of the Western canon, “to bring relevance to the music of old, dead white men.” He points to J.S. Bach’s funeral motet, Der Geist hilft unser Schwachheit auf, which the Choir will sing in the first section of its program. “The last, four-voice movement speaks of a man who believes that death isn’t the end of life, and of finding something outside of yourself to depend on other than humans, who will fail and disappoint you.”

Another example of relevance is Mari Esabel Valverde’s When Thunder Comes, a work by a former student of Armstrong’s which appears in the Songs of Social Justice and Compassion section of the program. “I wanted to include a piece that doesn’t make a political statement, but that speaks of a god of unconditional love. I totally understand students’ views on the organized church, but here, the arts become a prophetic voice.”

Speaking of music that resonates powerfully with listeners, Armstrong will follow Valverde’s piece with Jayne Southwick Cool’s When Memory Fades, which addresses the subject of dementia. “I asked the Choir how many of them were dealing with this in their families or among friends, and nearly half of them raised their hands. The president of a prominent seminary heard the Choir sing it last year, and told me that it gave him the courage to face the reality of his declining mother without fear.”

Armstrong believes that examples like these fulfill one of the prime objectives for which the St. Olaf Choir was founded more than a century ago. “It’s a ministry where the music, whether you believe in a god or not, goes beyond being excellent art and great aesthetics. It’s about transforming the lives of those who perform it, and more importantly in many ways, transforming the lives of those who hear it.” 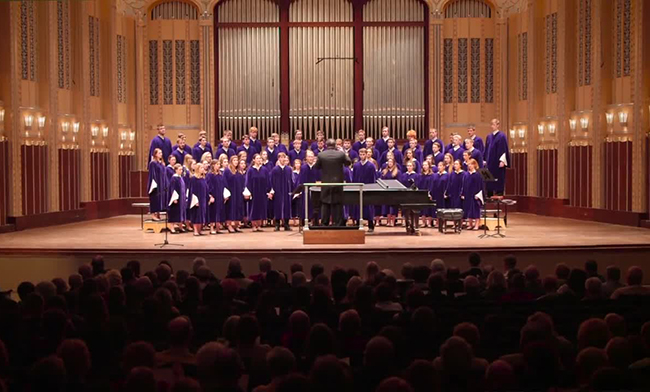 “Thirteen concerts in fourteen days! Thank God that these kids are between 19 and 22,” Armstrong said. “Now that I’m 60, it gets a bit harder on the body.”

Even for young singers, that’s a grueling schedule. How does the St. Olaf Choir pull it off? “Our school is now much more diverse geographically, socio-economically, and ethnically,” Armstrong said, “but no matter where the kids come from, at St. Olaf they still buy into an old Midwestern work ethic. I’m glad we haven’t lost the Scandinavian, Norwegian ethos that there’s joy and pleasure in working hard.”

Otherwise, Armstrong hews to his principle of teaching students to take responsibility for their own lives. “We don’t do room checks, but if you say you can’t sing a concert because you’re tired or not in good voice, and I find out that you were up late, you’ll get no sympathy from me!”

A former assistant conductor dropped by a rehearsal last week to thank the Choir for singing at her husband’s funeral, and gave the singers her own advice, Armstrong said. “You’ll never have another experience like singing in this choir. Be mature, take care of yourself and each other, and relish every moment.” She added, “For the audience, every performance is the first time, and you have to give your best. You’re only as good as the next concert.”