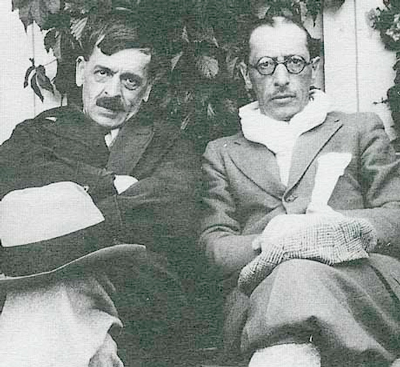 The plucky concert presenters at Arts Renaissance Tremont continued their excellent 25th Season on Sunday afternoon, November 22 at Pilgrim Church with a complete performance of Igor Stravinsky’s 1918 theater piece, L’Histoire du soldat, as well as the first performance of a new work by ART’s guest composer-in-residence, David Conte, who was present to conduct his own work.

David Conte’s “Fanfare / Exit to the Castle” is a five-minute extract from his full-length 1993 ballet, The Masque of the Red Death, based on Edgar Allan Poe’s short story of the same name. Conte reduced the full orchestra version to the same septet of instruments used in the Stravinsky work. This excerpt comes at the end of the first act of the ballet, when the Prince and his courtiers try to escape the plague engulfing their country by locking themselves in his castle. Conte has imagined the march into the supposed safety of the castle as a giant conga line.

After a brief introduction, the Latin rhythm begins, and it was easy to imagine a stage full of dancers snaking their way along to the conga beat. The piece ends in a somber mood, with a quiet pizzicato followed by a sharp, accented unison note. It was great, macabre fun.

After the scandalous successes of Igor Stravinsky’s three early ballets, Firebird (1910), Petrushka (1910-11), and The Rite of Spring (1913), World War I intervened. Following the war — and possibly for financial reasons — Stravinsky turned to a smaller-scale dramatic work, collaborating with the Swiss writer Charles-Ferdinand Ramuz (pictured with Stravinsky above).

L’Histoire du soldat (A Soldier’s Tale) was composed for a septet of violin, double bass, clarinet, bassoon, trumpet, trombone, and percussion, plus three actors and at least one dancer. The piece is a morality play about a soldier who sells his violin to the devil in exchange for unlimited wealth. Things don’t end well for the soldier.

Arts Renaissance Tremont performed a concert version. Local actor Robert Hawkes took up all three roles — Narrator, Soldier, and Devil — using an unidentified English translation of the original French text. The work is in a number of sections, including character pieces for dancing (a tango, waltz, and ragtime) and incidental music (“Brief tunes beside the brook”), some of which are accompanied by spoken, rhythmic recitation. Elsewhere there is unaccompanied dialogue between the two principal characters.

Playing without conductor, the members of the chamber ensemble gave each other cues and sometimes even subtly marked beats in the rhythmically tricky score. Just as The Rite of Spring was an experiment in primal rhythm and previously unheard harmonies, L’Histoire du soldat again emphasizes rhythm, but this time with a very restricted melodic and harmonic palette.

The violin that is central to the soldier’s downfall is also the main attraction of the music. Katherine Bormann was brilliant in meeting Stravinsky’s technical demands, often giving the music a devilish twist. The ensemble brought out many of the grotesque elements of the score without ever sacrificing musicianship or precision.

The decision to use just one actor for all of the roles was perhaps based on economics (and, in fairness, is not unusual). Robert Hawkes used a higher-pitched, quasi-British accent for the Devil, and an American accent for the Soldier. But there was not enough vocal differentiation for the narrator, making it very difficult to discern what was going on. The text is verbose and in rhyme. At the rate that Hawkes sped through it, many of the words were not clear in the acoustic of Pilgrim Church, even with a microphone. The tempo of the music under the recitations controls their speed, but the unaccompanied dialogue might have been slowed down for greater clarity.

These reservations aside, performances of L’Histoire du soldat are relatively uncommon, and this one was of high caliber — especially musically — for which the listeners at Pilgrim Church were grateful.

END_OF_DOCUMENT_TOKEN_TO_BE_REPLACED

The strings-only work by Berg has made relatively frequent appearances on the Orchestra’s programs. In 2021, the musicians recorded it for the In Focus series, and it appeared again on last year’s European tour. Friday’s rendition maintained the group’s characteristic light and effortless playing, each section blending as much as possible to echo the work’s original form as a string quartet. At fifteen minutes total, the piece is quite short, but the dense encoded musical meanings require some extra-attentive listening. Splitting up the three movements ensured that each one could be appreciated on its own. END_OF_DOCUMENT_TOKEN_TO_BE_REPLACED