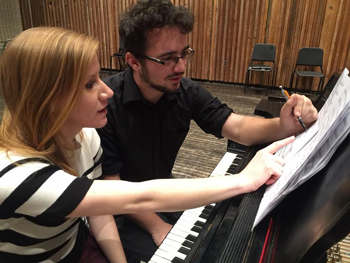 Tradition reigns during the December holidays, but new infusions into what might be called “The Great Christmas Carol Book” can give new life to musical celebrations. Think of King’s College, Cambridge, whose choir annually commissions a new piece — often strikingly new — for its Festival of Nine Lessons and Carols, broadcast live on Christmas Eve.

Summit Choral Society will include a new carol setting in its Candlelight Christmas Concerts at St. Bernard’s Church in downtown Akron on Friday, Saturday, and Sunday evening, December 16, 17 at 18 at 7:30 pm. As part of the “Bells” section of the program, the Masterworks Chorale will perform a newly-commissioned setting of I heard the bells on Christmas Day written by University of Akron music major Mickey McGroarty.

In a telephone conversation, conducting fellow Anna Ahrens noted that Summit Choral Society artistic director Marie Bucoy-Calavan has adopted the mission of “Preserving and conserving — passing classical choral music on to younger generations. My position, our program of choral scholars, and the inclusion of young soloists are all part of that, as well as giving real-world experience to a student composer.”

McGroarty, who joined us on speakerphone, started out majoring in human biology, but Bucoy-Calavan inspired him to switch to music. “I felt like that was where I needed to be for the rest of my life,” he said. He already has hands-on experience as a choral arranger: he serves as music director of Nuance, the University of Akron’s male a cappella ensemble, and arranges nearly all of their music.

The composer admits that his first foray into arranging for mixed chorus has been a challenge. “It’s odd to spell chords over such a wide range. I have to write notes very close together for my men, and you get into the habit of writing for that texture.”

But working with a wider tonal palette has also been a liberating experience, especially near the end of his new piece, where the chorus splits into seven parts. “It gives me more freedom because I have so much more space to work with.”

Ahrens said that the new carol came about when the Christmas programs were being drawn up last summer. “There’s a ‘Bells’ set in the concert that includes the well-known Carol of the Bells and an arrangement of Silver Bells.” Wanting to include a setting of I Heard the Bells on Christmas Day, but not finding one that fit the purpose, Bucoy-Calavan and Ahrens decided to commission “the perfect arrangement” from the talented University of Akron student.

The carol sets words of Henry Wadsworth Longfellow written in 1863 at the height of the American Civil War, in which the poet had a personal interest because his eldest son had enlisted in the conflict — without consulting his father. In the seven stanzas of the poem, cannon fire threatens to drown out the sound of the Christmas bells, but the bells prevail with their message of “Peace on earth, good will to men.” 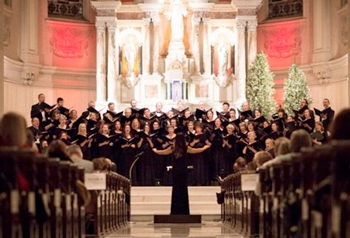 McGroarty’s a cappella arrangement is based on a Victorian hymn tune by the English organist John Baptiste Calkin that dates from 1848 but has been associated with the Longfellow poem since the early 1870s. The arranger decided to set only five of its stanzas for the Summit Choral Society. “I wanted a contrasting feeling for each stanza, and I chose the ones that spoke the most to me,” he said. McGroarty also included bell motives in the second stanza and at the climax of the piece.

Ahrens worked with McGroarty in the early stages of the project. “I gave him some idea of what voice divisions would work with the Summit Choral Society, which has fewer men than women. Otherwise, I told him this was his creation to work on. I didn’t want to cramp his style.”

Ahrens said that the piece was a lot of fun to prepare. “I think the chorus really enjoys being part of something new. After every rehearsal, a different singer would come up to me and say they really enjoyed it. Each stanza in Mickey’s arrangement has a different mood, which helps me teach it to the singers.”

McGroarty was delighted with the results. “It was awe-inspiring having so many people sing something I had put together,” he said, adding that he was happy that the arrangement sounded as he had expected it to.

The new carol arrangement joins slightly older traditional music on this weekend’s programs, including Franz Biebl’s Ave Maria, and Ralph Vaughan Williams’ Fantasia on Christmas Carols. The Masterworks Chorale will be joined by the Summit Choral Society Performance Choir on all three programs, and other Summit children’s choruses will alternate on the three concerts.

END_OF_DOCUMENT_TOKEN_TO_BE_REPLACED

The Orpheus myth inspired French Baroque composers Jean-Philippe Rameau and Philippe Courbois to write expressive solo cantatas about the famous Greek musician-poet and his futile attempts — because of his own impatience — to rescue his beloved Eurydice from the grasp of Pluto in the Underworld. These are beautifully performed by the clear-voiced soprano Hannah De Priest and the velvet-throated baritone Jonathan Woody (who makes a walk-on appearance in the Rameau). END_OF_DOCUMENT_TOKEN_TO_BE_REPLACED

Now that live concerts are beginning to proliferate, it was delightful to hear Oberlin cello professor Darrett Adkins ring a change on the solo suite format with his Hypersuite No. 3 on September 28 in the Cirigliano Studio Theatre at Lorain County Community College. His program opened the new season of Signature Series performances in Elyria, and was dedicated to the memory of Eva Hornyak. END_OF_DOCUMENT_TOKEN_TO_BE_REPLACED