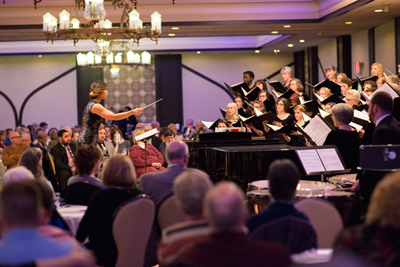 The Summit Choral Society’s Masterworks Chorale earned high marks on Sunday afternoon, April 10 with its innovative end-of-season event at Akron’s Tangier Ballroom under the direction of Marie Bucoy-Calavan. The program of dance-inspired choral works combined singing, ballet, and ballroom dancing into an easy and delightful partnership, and even gave the audience the opportunity for some feet-on experience at the end.

The large audience was seated at 10-top, round tables on either side of a central dance floor, with the chorus on risers at one end.  The program began with four choral songs from Johannes Brahms’s Zigeunerlieder, Op. 103, two of them danced energetically by Brian Murphy and Brooke Wesner. 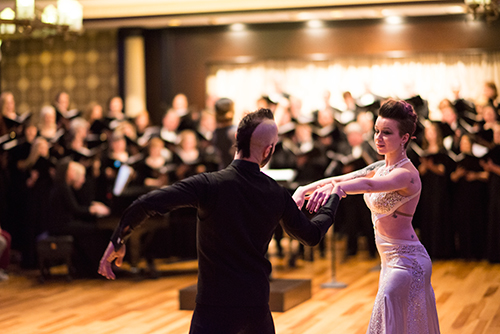 The ballroom bar did a brisk business both before the program and during intermission. Then came two wildly different choral pieces that invoked the idea of dancing. Choral conducting fellow Anna Ahrens led the chorale in a spirited fa-la-la-ing of Thomas Morley’s Now is the Month of Maying, followed by a sultry choral crooning of Cole Porter’s Night and Day, led by Bucoy-Calavan and enhanced by ballroom dancers and a few brushstrokes from the percussion.

Those percussionists were in place for the grand finale, selections from the “Uf dem Anger” section of Carl Orff’s Carmina Burana, which is all about the burgeoning of love in the springtime — with a bit of dancing thrown in. Orff’s infectious music inspired Brian Murphy and Brooke Wesner both to some athletic dance moves and to beautiful, flowing interactions.

Throughout the program, the well-prepared Masterworks Chorale sounded well-blended and completely on top of their sometimes tricky music. Lilting solos and semi-choruses added a nice variety of texture to the Liebeslieder, and the chorus’s flexibility in switching from Morley to Porter to Orff in quick succession was impressive. In Carmina Burana, passages for women’s voices were clear and beautifully tuned, men’s voices were strong and virile, and the full chorus nearly blew the roof off of Tangier’s faux-Moroccan ballroom in “Were diu werlt alle min.” 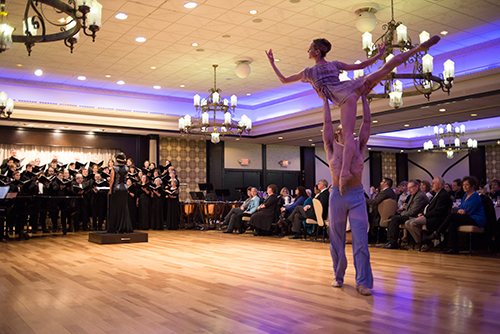 Pianists Karen L. Prasser and Beverly Kalasky shared the grand piano keyboard for the Brahms pieces. For the Orff, which requires two pianos, Prasser moved to an electric instrument, but the difference in timbre scarcely mattered because their playing was so rhythmically secure and their ensemble so good. The accomplished percussion section was staffed by Austin Ferguson, Emily Larson, Cameron Weichman, and timpanist Bill Sallak.

After the formal part of the program, the bar reopened, hors d’oeuvres were set out, and those who wished could stick around to learn how to rhumba — or dust off their ballroom skills — under the tutelage of Parker Amsel and his crew. Many did just that, bringing a fun and unusual afternoon of choral-music-plus to an interactive conclusion.