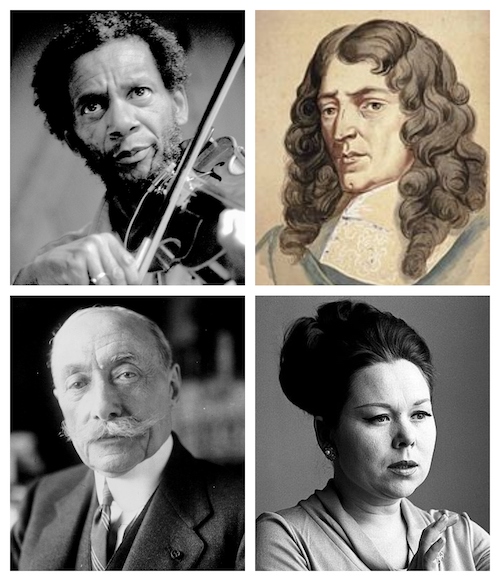 Let’s start with Chicago-born composer, violinist, and violist Leroy Jenkins, who died on this date in 2007 in New York City, and who was known for working in the space between jazz and classical music. One example of his unique, hybrid style of writing is his Themes and Improvisations on the Blues, featured in The New York Times’ “5 Minutes” article on string quartets, which includes a recording of that piece by the Soldier Quartet.

Some of the writing has a puckish air reminiscent of Neo-Classical Stravinsky, refracted through an American prism. When members of the quartet respond to Jenkins’s invitation to improvise — he calculated that approximately 30 percent of this performance was spontaneously conceived — their bent notes and dramatic glissandos echo the songful cries of Jenkins’s own playing.

One of the leading French composers of the 17th century, Marc-Antoine Charpentier — who died on this date in 1704 in Paris — has been a popular figure on the programs of Quire Cleveland over the years. Among the recordings on their excellent YouTube Channel is a live performance of the Kyrie from one of Charpentier’s most famous works, the Midnight Mass for Christmas, a piece that’s especially appealing for its use of several French carols. Listen here.

Another French composer from several generations later died on February 24, 1929. That would be André Messager, who studied with Saint-Saëns and Fauré, and who is best known for his opérettes and opéra comiques such as Véronique, and for ballets such as Les Deux Pigeons.

Here’s a short clip of “The Two Pigeons” from a 2016 performance by the Royal Ballet and the Orchestra of the Royal Opera House, led by Barry Wordsworth. The music is great, but an even better reason to watch is the elegant and bouncy footwork from Fumi Kaneko and Vadim Muntagirov in Frederick Ashton’s 1961 choreography.

And Italian soprano-turned-opera-director Renata Scotto turns 87 today. Considered one of the greatest vocalists of her generation, Scotto is also known as an exceptional actress. That combination of talents came up in an extensive interview with Stephen Rubin for The New York Times in 1978:

I prefer the great personality. Take a role like Butterfly. They say I’m the best Butterfly because I act, identify with the role. But this identification is very, very controlled by myself. I am an actress, but I am also a singer. Even when I am deeply involved in the character, I don’t forget that I am on stage. If I control myself, I never go overboard. If I don’t control myself, I go crazy. I remember the first time I sang Butterfly, I started to cry. I was finished.

Other anniversaries on this date include the birth of Czech conductor Jiří Bělohlávek in 1946, and the death of Russian-American composer and pianist Leo Ornstein in 2002 — at the age of either 108 or 109.

Mark your calendar for three events tonight at 7 pm.

END_OF_DOCUMENT_TOKEN_TO_BE_REPLACED

Rodgers & Hammerstein’s Cinderella was originally produced for television in 1957 — seven years after the animated Disney film was released — and starred Julie Andrews. According to the Rodgers & Hammerstein website, it was viewed by over 100 million people. END_OF_DOCUMENT_TOKEN_TO_BE_REPLACED

The story line has its origin in an 1855 play and an 1842 farce that Thornton Wilder mined for his 1938 play The Merchant of Yonkers. When that turned out to be a flop, in 1954 Wilder made the crucial decision to re-center the show around the character of the legendary marriage broker Dolly Gallagher Levi and renamed it The Matchmaker. END_OF_DOCUMENT_TOKEN_TO_BE_REPLACED

The Dodero Center for the Performing Arts at the Gilmore Academy in Gates Mills is one feature of an impressive campus. The auditorium is shallow, the stage is deep, and the ensemble played without a shell. Throughout the program, the sound, especially in instruments’ lower registers, tended to disappear. END_OF_DOCUMENT_TOKEN_TO_BE_REPLACED