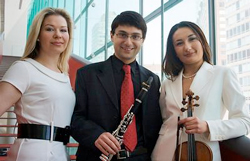 Certain chamber music ensembles make intuitive sense. A string quartet has four voices with matching timbres, perfect for writing balanced counterpoint, while a wind quintet provides a variety of colors and allows for cohesive ensemble playing, since all the players must breathe. But the Prima Trio’s combination of clarinet, violin (or viola), and piano is less obvious. Each instrument hails from a different family, each with a distinct tone color and disparate methods of articulation and phrasing. END_OF_DOCUMENT_TOKEN_TO_BE_REPLACED 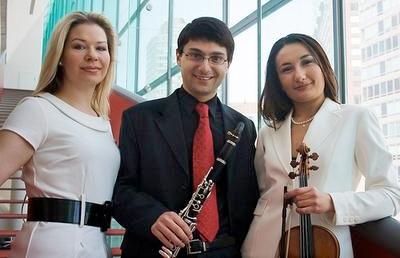 Although its members have gone on to establish impressive individual careers, the Trio continues to tour internationally. In recent seasons they have appeared on the “Junge Elite” Series at the Festspiele Mecklenburg-Vorpommern (Germany), at the Kennedy Center for the Performing Arts, on the Oakton Chamber Music Series, and on the Dumbarton Oaks series in Washington D.C. They also made their Los Angeles début with three concerts on the Da Camera Society series.

END_OF_DOCUMENT_TOKEN_TO_BE_REPLACED

“Mary’s Song” refers to the Magnificat (“My soul doth magnify the Lord”), sung by the soon-to-be mother of Jesus in response to the message the angel Gabriel delivered to her in the Gospel according to Luke. The text has been set countless times by composers in all eras, largely because the Magnificat is one of the invariable texts in the daily service of Vespers, as well as its Anglican relative, Choral Evensong. END_OF_DOCUMENT_TOKEN_TO_BE_REPLACED

Music director and conductor Daniel Meyer built his playlist around Cleveland themes and scenes. “Exploration CLE” made use of engaging selections from the classical canon and beyond that celebrated “what makes Cleveland so special.” Happily, he and his musicians avoided constructing a visual slide show, choosing to let the music speak for itself. END_OF_DOCUMENT_TOKEN_TO_BE_REPLACED

You could see the relationship at work on a practical level. Repertoire for two players at the same piano requires a certain choreography. There’s just one of each pedal to share, and the hand crossings left and right — which can be so fun to watch a soloist pull off — get more complicated when another person’s involved. At times, Pompa-Baldi drew a hand away from the keyboard and into his body, making room for Friscioni, and at the close of a few delicate phrases, the two were crouched together over the same final notes at one end of the instrument. END_OF_DOCUMENT_TOKEN_TO_BE_REPLACED