Fans of Quire Cleveland’s annual Carols for Quire performances know that the ensemble’s singers are adept at wrapping their tongues around any number of languages in the same program. But as co-founder and artistic director Ross W. Duffin notes, the forthcoming performances may well set a new record. In three performances next weekend, his nineteen professional vocalists will treat their audiences to carols in Finnish, Abenaki, Afro-Portuguese, Mohawk, and Wendat, as well as in English, Latin, and Spanish.

“I’m always challenging the singers, but I think they were looking askance at me this time just because of all the special requirements,” Duffin said in a telephone conversation from his office at the music department of Case Western Reserve University.

One of those special requirements centers around the longest work on this year’s program, an Ensalada or musical salad by the 16th century composer Bartolomé Carceres. END_OF_DOCUMENT_TOKEN_TO_BE_REPLACED 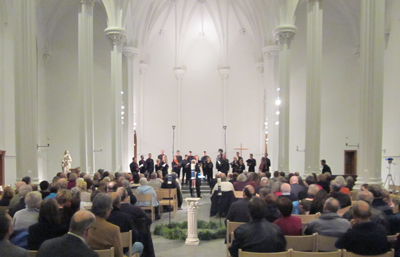 When you’ve presented a Christmas program every December for seven years, it could become a routine event — your institutional Nutcracker. Happily, Quire Cleveland has taken its “Carols for Quire” program in new directions and infused it with new twists every year. The 21-voice professional ensemble’s concert on Sunday afternoon in the chaste, Gothic space of St. Peter’s Church in downtown Cleveland just might have been its best edition yet. END_OF_DOCUMENT_TOKEN_TO_BE_REPLACED

The Cleveland Orchestra — or at least half of it — marked Valentine’s Day with a straight-through, 50-minute concert led by Belgian early music guru Philippe Herreweghe. The February 14 performance, marketed as a romantic evening of orchestral classics, played to a packed house (marketing works!). END_OF_DOCUMENT_TOKEN_TO_BE_REPLACED

Music is said to be a universal language, but it does speak with different accents. When you’re playing music by Jean Sibelius, it’s helpful to have a Finnish conductor on the podium, which is what made Susanna Mälkki’s pair of Cleveland Orchestra concerts so lucid and communicative earlier this month. END_OF_DOCUMENT_TOKEN_TO_BE_REPLACED

END_OF_DOCUMENT_TOKEN_TO_BE_REPLACED

Today’s touring string quartets hew to so uniformly high a standard that it’s often little individual touches that make ensembles stand out. The Polish musicians who make up the Apollon Musagète Quartet showed up at Plymouth Church in Shaker Heights for their debut on the Cleveland Chamber Music Society series on February 4 in matching plaid suits and black shirts. And jettisoning their jackets, they played standing (except for the cellist). END_OF_DOCUMENT_TOKEN_TO_BE_REPLACED