Of all instrumentalists, pianists seem to commission and perform new works the least often. The repertoire for the piano is already so vast and worthy that many performers see no need to add to it. Why even play pieces from the past half-century, when there is so much great, neglected, earlier music?

Luckily, not all pianists think this way. Take Orli Shaham, whose album American Grace, released in February on Canary Classics, features attractive works written since 1975 by John Adams and Steven Mackey, as well as two world premiere recordings. One of those pieces, Steven Mackey’s concerto Stumble to Grace, was commissioned for Shaham by a consortium of orchestras as a result of her own initiative. 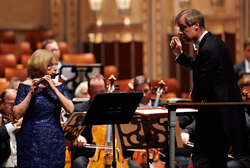 END_OF_DOCUMENT_TOKEN_TO_BE_REPLACED

Then, you heard all the qualities that make for a stunning soloist. Winner of the 2013 Cleveland International Piano Competition, Khristenko was back in town this month for a recital in Piano Cleveland’s summer series, Piano Days @CLE. And he couldn’t help but revel in the spotlight a little, even as he settled into a more collaborative role at the keyboard for his program, “Stanislav and Friends.” END_OF_DOCUMENT_TOKEN_TO_BE_REPLACED