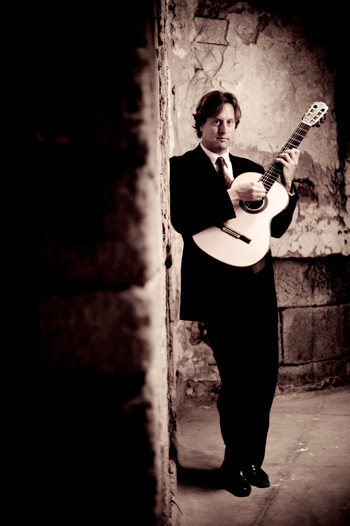 The 17th Cleveland International Classical Guitar Festival got off to an auspicious start at the Cleveland Institute of Music on Friday evening, June 9 with a beautifully structured recital by Jason Vieaux. Originally scheduled for Mixon Hall, the performance was moved to Kulas Hall because of the demand for tickets. In cases like that, it’s nice to have a second venue right across the lobby. Any doubts about how the sound of a solo guitar would fare in the larger space were immediately put to rest by Vieaux’s sonorous performance of Fernando Sor’s Mes Ennuis at the top of the program. END_OF_DOCUMENT_TOKEN_TO_BE_REPLACED 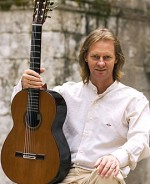 On Saturday, June 10 at 8:00 pm in Mixon Hall, Russell will return to Cleveland for his debut performance on the Cleveland International Classical Guitar Festival. He will also present free public masterclasses on Friday, June 9 at 3:00 and Sunday, June 11 at 4:30 in CIM’s Studio 113. END_OF_DOCUMENT_TOKEN_TO_BE_REPLACED

“I cannot believe it’s the 17th season,” CICGF founder and artistic director Armin Kelly said during a recent telephone conversation. “Over the years I’ve learned a lot about what to do and what not to do, but it was a steep learning curve.”

Kelly noted that the Festival has grown beyond what he had ever imagined possible. “I was interested in figuring out how to fill a void in the presentation of the classical guitar in Cleveland,” Kelly said. “There were guitar programs at CIM, Oberlin, the University of Akron, and other schools in the area, but there really wasn’t an established concert presenter for the instrument.” END_OF_DOCUMENT_TOKEN_TO_BE_REPLACED

The Cleveland Classical Guitar Society (CCGS) concluded its 2013-2014 season on Saturday evening, March 29 at Plymouth Church in Shaker Heights with a performance by the celebrated guitarist, David Russell. Within the span of just four years, under the direction of Erik Mann, the CCGS has gone from offering a handful of small local events per year to presenting high-profile international performers like Grammy-award winning David Russell, arguably the best classical guitarist in the world.

David Russell was born in Scotland and now resides in Spain. He has a unique connection to Cleveland in that for the last 20 years he’s been recording with the Cleveland-based Telarc International. And one extra piece of trivia: Russell is a devoted and accomplished golfer, having won amateur tournaments.

Despite adverse weather conditions, the audience was nonetheless sizable, and judging by its enthusiasm when Russell took the stage it was apparent that he enjoys a base of devoted fans.

END_OF_DOCUMENT_TOKEN_TO_BE_REPLACED

Considered one of today’s preeminent musical performers, David Russell received a Grammy Award for Best Instrumental Soloist Performance (without orchestra) for his 2004 recording of “Aire Latino.” His many additional awards include being named a Fellow of The Royal Academy of Music in London and having a conservatory hall and a street in Spain named after him.

While preparing for our conversation I read a number of interviews with David Russell and nearly all the interviewers commented on what a genuinely nice, down to earth guy he is. And I must concur. I reached David Russell by telephone in San Francisco and began by asking him about how he makes his programming decisions.

END_OF_DOCUMENT_TOKEN_TO_BE_REPLACED

It might seem that there’s not a lot left to discover after three decades of experience with the Red Priest’s charming and evocative score, but this performance boasted a secret weapon: the young Spanish violinist Francisco Fullana, now the Orchestra’s artist-in-residence, whose affecting personality and easy virtuosity raised the solo part a quantum leap above the merely extraordinary. END_OF_DOCUMENT_TOKEN_TO_BE_REPLACED

END_OF_DOCUMENT_TOKEN_TO_BE_REPLACED

The Cleveland Orchestra’s second performance of the new season on Sunday afternoon, October 17 at the newly renamed Mandel Hall at Severance Music Center was just such an occasion. If the ensemble’s return to public concerts under the baton of Franz Welser-Möst wasn’t enough reason to light a bonfire, the Cleveland debut of a new work written for one of the Orchestra’s most popular soloists, and the swan song of one of its longest-serving members added extra fuel to the celebration. END_OF_DOCUMENT_TOKEN_TO_BE_REPLACED