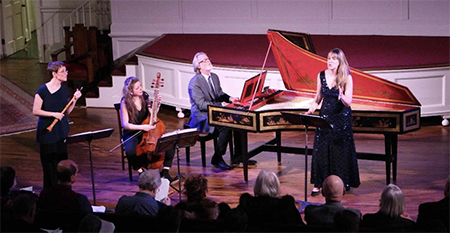 Nagy said she spent some time in denial and grieving, but as the weeks progressed, and studies were released about the possible dangers of singing and performing in large groups, she began to ask herself: what does this mean for Les Délices?  END_OF_DOCUMENT_TOKEN_TO_BE_REPLACED

Their fourth subscription concert, Games and Grounds, which premiered on February 18 and will be available through March 1, finds the members of Les Délices in top form and, if anything, more communicative with their audience than ever before, thanks to the digital magic of Erica Brenner and her audio/visual production team that includes Elaine Martone, Andrew Tripp, and Mathias Reed. END_OF_DOCUMENT_TOKEN_TO_BE_REPLACED

Banks carried four different saxophones with him to the audience-less West Shore Unitarian Universalist Church, along with two classic pieces he had transcribed and three powerful new works — one of them his own. He explained at the start that the new pieces would be receiving “workshop performances” as he prepares them for his Young Concert Artists (YCA) debut recital at New York’s Merkin Hall on March 10, when he will again be joined by Bjerken. END_OF_DOCUMENT_TOKEN_TO_BE_REPLACED

Episode 5 is subtitled “Musical Patterns,” a nod to the fact that three of the four works are examples of “minimalism,” or maybe more precisely, “repetitive music.” END_OF_DOCUMENT_TOKEN_TO_BE_REPLACED