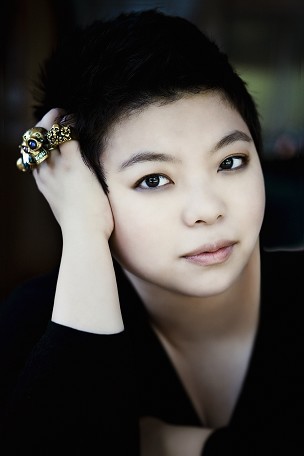 The first concert in season four of Franklin and Diana Cohen’s ChamberFest Cleveland begins on Wednesday, June 17 at 8:00 pm in SPACES Gallery. This year’s theme is “Crossing Borders” — borders including those of geography, culture, style, mood, and career path. We caught up with violinist/violist Yura Lee, a veteran of the festival, who will be performing on the first five concerts (June 17, 18, 19, 21, 23) as well as the tenth and final concert on July 1. See our interview with the Cohens for details about each concert.

Yura Lee is the winner of the only first prize awarded across the four categories in the 2013 ARD Music Competition in Munich. The recipient of the prestigious Avery Fisher Career Grant, she is also currently a member of the Chamber Music Society of Lincoln Center as both violinist and violist.

END_OF_DOCUMENT_TOKEN_TO_BE_REPLACED 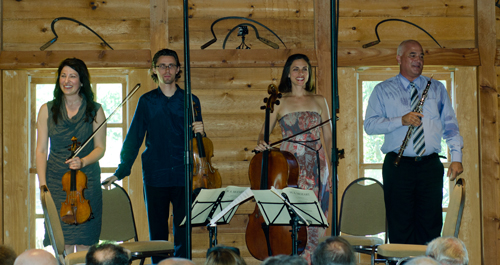 It appears that the stars have aligned for ChamberFest Cleveland’s third season birthday party. Inspired by the number three, Artistic Directors Diana Cohen and Franklin Cohen have put together some truly creative concert programs, a fact that has not gone unnoticed by my reviewer colleagues. And, as we have come to expect from ChamberFest, the performances by the outstanding group of musicians that have assembled for these concerts are second to none. Such was the case on Sunday, June 22, at Dunham Tavern Museum Barn, when the players – keeping with the number three – scored a Hat-Trick before a capacity crowd during a concert titled “Revolving Thirds: From Darkness to Light,” that featured music by Mozart, Penderecki and Schubert. END_OF_DOCUMENT_TOKEN_TO_BE_REPLACED

ChamberFest Cleveland is doing it right. With ten concerts over eleven days blends thoughtful programming, diverse venues, exceptional musicians, and a convivial vibe for a musical experience as refreshing and sweet as the ice cream that’s served after some of the concerts.  It’s an ideal model for the future of classical music.

On June 20 at Harkness Chapel, all of these attributes mixed beautifully in a “Mélange à Trois” (the twee but clever program titles are just another aspect of ChamberFest’s affability). The program linked trio pieces spanning a 270-year period, with each consecutive work more than a century distant from its neighbors. Yet the music evinced stronger connections than are often found in a standard concert. Three of the four pieces featured Eastern European accents (be they Gypsy, Hungarian, or Jewish), and each had a rambunctious wildness fearlessly channeled by the musicians. END_OF_DOCUMENT_TOKEN_TO_BE_REPLACED

Jackson began the program with a recitation of Langston Hughes’ poem “Helen Keller” — the first of five poems by Hughes that served as interludes between each piece on the first half. END_OF_DOCUMENT_TOKEN_TO_BE_REPLACED

Pianos with pins and tape on strings, a bass drum and tam tam, crotales, Almglocken, and vibes. Microphones were hooked up all around the instruments. The feed was sent to speakers around the room. Lighting designer Nicholas Houfek hung incandescent globes over the arrangement of instruments from thin black wires stretching across the beams. END_OF_DOCUMENT_TOKEN_TO_BE_REPLACED

From the podium, Elim Chan set an ambitious tone for the evening. The rising star conductor, here in her Cleveland Orchestra debut, has a commanding style, and every twist and turn in Saturday’s performance tracked closely with her baton. END_OF_DOCUMENT_TOKEN_TO_BE_REPLACED