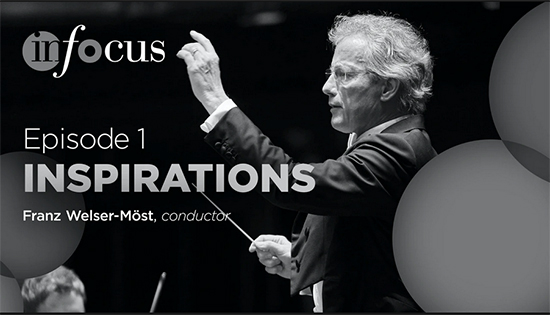 First came Apple’s Siri (if she didn’t know the answer to a question, she’d helpfully reply, “I can look that up for you on the internet”). Then Amazon’s Alexa offered hands-free connections to the web (“Alexa, play NPR”) — while perhaps also listening in on our conversations.

Now, The Cleveland Orchestra has introduced Adella, named after its founder and first general manager, Adella Prentiss Hugues. She will knowledgeably serve as curator for all of the Orchestra’s digital content. That includes premium items — the In Focus Concert Series and Cleveland Orchestra Showcase — as well as free video from the Orchestra’s archives, expeditions behind the scenes, and “On A Personal Note” podcasts.

Central to Adella’s mission is bringing musicians back to Severance Hall to make music for the Orchestra’s patrons for the first time since the pandemic threw a spanner into the works in March. The In Focus series, which begins this Thursday, October 15, will comprise five, one-hour programs recorded mostly by the Orchestra’s strings, masked and physically distanced on the Severance stage. Wind players will be used sparingly. A few souls will be invited to attend, but most will watch via the stream. END_OF_DOCUMENT_TOKEN_TO_BE_REPLACED

The first such video, capturing the October 20 performance of Resilience at First Baptist Church in Shaker Heights, delivered handsomely on that promise. Erica Brenner’s sensitive videography and audio mixing preserved brilliant performances of music that illuminated two troubled periods in history: the plague of London in 1665, and the outbreaks of cholera and dysentery that dampened but failed to defeat the human spirit at the end of the American Civil War two centuries later. END_OF_DOCUMENT_TOKEN_TO_BE_REPLACED

The Diamond Brass Quintet opened Rocky River Chamber Music Society’s new season on Monday, October 12 with nobody in the pews at West Shore Unitarian Universalist Church. Like most performances these days, the concert was only attendable online. The players were widely-spaced on the stage, plexiglass shields were in place to cut down on aerosol transmissions, and the quintet took two intervals to go outdoors and let the air in the sanctuary refresh itself. (Rehearsals had been held outside as well.) END_OF_DOCUMENT_TOKEN_TO_BE_REPLACED

“Bewitched,” the first subscription concert of this season by Les Délices, can be summed up in one word: sensational. In her introductory remarks, director Debra Nagy talked about the “Embracing Change” theme of the season and completely rethinking the concert experience for streaming. The detailed planning was in evidence throughout the program. “Bewitched” was not just a concert; it was a carefully planned musical film, with elements of drama and music appreciation, all in support of the inspired program choices featuring Medea and Circe, two famous witches (or sorceresses, if you prefer) of classical antiquity. END_OF_DOCUMENT_TOKEN_TO_BE_REPLACED

END_OF_DOCUMENT_TOKEN_TO_BE_REPLACED

Though it had amassed a vast trove of audio over the decades, The Cleveland Orchestra has come late to the game in the video department. Even so, the organization wasn’t about to rush to produce the equivalent of home movies to keep its patrons engaged while live events were on hold. END_OF_DOCUMENT_TOKEN_TO_BE_REPLACED

END_OF_DOCUMENT_TOKEN_TO_BE_REPLACED

Although it wasn’t the original plan to go online last weekend for the final round of the James Stroud Classical Guitar Competition, moving to a digital format suited the event well. Young performers Aytahn Benavi, Patricia Hernandez, Ian Tubbs, and Eric Wang played in the intimate setting of their own homes, giving everyone who tuned in a front row seat. END_OF_DOCUMENT_TOKEN_TO_BE_REPLACED