Allen said that 51XO has learned a lot about sustainability during the past couple of years through the training they’ve received from the Robert Rauschenberg Foundation. “We’re creative people and we should be using those creative energies to develop new programs in both artistic and organizational capacities. I anticipate that we will have a good bit of interest in this program once the word gets out.”   END_OF_DOCUMENT_TOKEN_TO_BE_REPLACED

A concert of “new music” conjures up for some listeners the works of the atonal and twelve-tone works of the likes of Arnold Schoenberg and his disciples, the austere works of Pierre Boulez, or the dense modernist Harrison Birtwistle. But these days composers of contemporary “classical” music are no longer bound by such musico-political considerations. There is no “accepted” modern style. Instead composers now draw upon a wide variety of inspiration: old works, pop and rock music, jazz and world music, among other influences. END_OF_DOCUMENT_TOKEN_TO_BE_REPLACED 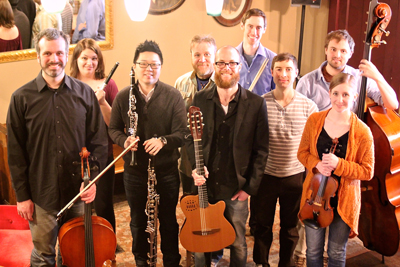 “This is going to be a cool concert,” 51XO’s executive director Jeremy Allen said enthusiastically during a telephone conversation. “We’re asking people to arrive at 8:00 pm and spend the first half hour exploring the space. I’ve talked to a lot of people who know where it is but have never been inside, so we want to give everyone a chance to get a feel for the space, and do some shopping if they want to.” END_OF_DOCUMENT_TOKEN_TO_BE_REPLACED

END_OF_DOCUMENT_TOKEN_TO_BE_REPLACED

The strings-only work by Berg has made relatively frequent appearances on the Orchestra’s programs. In 2021, the musicians recorded it for the In Focus series, and it appeared again on last year’s European tour. Friday’s rendition maintained the group’s characteristic light and effortless playing, each section blending as much as possible to echo the work’s original form as a string quartet. At fifteen minutes total, the piece is quite short, but the dense encoded musical meanings require some extra-attentive listening. Splitting up the three movements ensured that each one could be appreciated on its own. END_OF_DOCUMENT_TOKEN_TO_BE_REPLACED