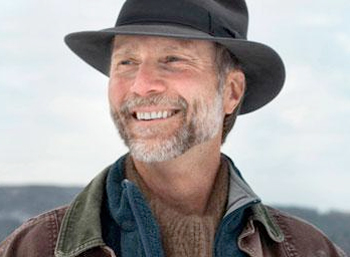 John Luther Adams’s Veils and Vesper, a cycle of electronic works composed in 2005, will end its two-month run next weekend at the newly restored Historic St. John’s Episcopal Church in Ohio City. A slow-moving, “immersive sound installation,” Veils and Vesper lasts six hours and allows the listener to “create her own mix by moving through the space.” The installation launched this year’s edition of the Cleveland Museum of Art’s Performing Arts Series.

The remaining visiting hours are on Friday, November 7 and Saturday, November 8 from 12 Noon to 6:00 pm. Admission is free. St. John’s is located at 2600 Church Avenue (off West 25th Street near the western end of the Detroit-Superior Bridge). Read a CMA blog post and watch a short video here.

Two sound extravaganzas by environmental composer and Pulitzer prizewinner John Luther Adams will launch the 2014-2015 Performing Arts Series of the Cleveland Museum of Art — though not at the museum.

Veils and Vesper, a cycle of electronic works composed in 2005, will begin a two-month run on Saturday, September 20 at the newly restored Historic St. John’s Episcopal Church in Ohio City. A slow-moving, “immersive sound installation,” Veils and Vesper lasts six hours and allows the listener to “create her own mix by moving through the space”. Visiting hours through December 1 are Wednesdays through Saturdays from Noon to 5:00 pm and Thursdays from Noon to 8:00 pm. Admission is free

Adam’s second contribution to the series is Inuksuit, a 2009 daylong site-specific work devised for nine to 99 percussionists to be dispersed over a wide outdoor area, in this case Lakeview Cemetery, and inspired by “the Stonehenge-like markers used by the Inuit and other native peoples to orient themselves in Arctic spaces.” The free performance begins at 2:00 pm on Sunday, September 21. END_OF_DOCUMENT_TOKEN_TO_BE_REPLACED

Bianca Ciubancan (16, Chicago, Ill) began the afternoon session with Jessie Montgomery’s Rhapsody No. 1 for solo violin. Playing with a warm, rich sound, Ciubancan brought a thoughtful, intimate approach to the work, highlighting each of its distinct episodes. END_OF_DOCUMENT_TOKEN_TO_BE_REPLACED

END_OF_DOCUMENT_TOKEN_TO_BE_REPLACED

Franz Schmidt’s Symphony No. 4 showcased the ensemble, under guest conductor Jonathan Berman, in the standard conventions of a not-so-standard piece. But at the start of the program, the musicians were equal partners to pianist Cédric Tiberghien, whose playing could be as bold as the full orchestra or as intimate as any instrumental solo. END_OF_DOCUMENT_TOKEN_TO_BE_REPLACED