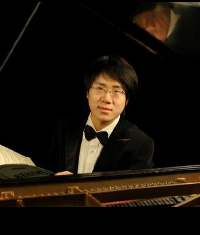 Ruoyu Huang (24, China, left) was first to perform on Tuesday afternoon, beginning with French music — two Debussy Preludes and Ravel’s La Valse — then went on to Schumann’s Davidsbündertänze and Balakirev’s Islamey. Debussy’s Minstrels and Ce qu’a vu le vent d’ouest presented Huang with the opportunity to paint two different impressionistic scenes that might have been even more vivid had he brought out color and rhythm in the first and played with more sweep and legato in the second. His gloriously virtuosic reading of La Valse was suitably decadent with dramatic ebb and flow and his Schumann visited every emotional level from the dreamy to the passionate. His pianissimo playing was lovely. Festive and characteristic, Huang’s performance of the Balakirev — an unabashed showpiece without a lot of musical content — was a flight of sheer pianism. END_OF_DOCUMENT_TOKEN_TO_BE_REPLACED

END_OF_DOCUMENT_TOKEN_TO_BE_REPLACED

A new CD by Christa Rakich, who is currently Visiting Professor of Organ at the Oberlin Conservatory, gives a nod in two directions. As its title announces, it’s an homage to her former teacher and colleague, the late Yuko Hayashi, longtime professor at the New England Conservatory and curator of Boston’s Old West Church Organ Series. It’s also the first recording to be made of Richards, Fowkes & Co.’s Opus 16 instrument, built in 2008 for Goodson Chapel of the Duke Divinity School in Durham, North Carolina. END_OF_DOCUMENT_TOKEN_TO_BE_REPLACED

END_OF_DOCUMENT_TOKEN_TO_BE_REPLACED

Hailed by the New York Times as “The Best Classical Music Ensemble of 2018,” Wet Ink Ensemble has lived up to this acclaim once again with their recent release Glossolalia/Lines on Black. The album takes its name from the two extended works by Wet Ink members Alex Mincek (saxophone) and Sam Pluta (electronics). The remainder of the septet includes Eric Wubbels (piano), Erin Lesser (flutes), Ian Antonio (percussion), Josh Modney (violin), and Kate Soper (voice). END_OF_DOCUMENT_TOKEN_TO_BE_REPLACED

Croatian-born pianist Martina Filjak, now living in Berlin, has released her latest album, Light and Darkness, featuring music by Franz Liszt — plus an epilogue by Arvo Pärt. The disc confirms once again all the special technical and interpretive qualities that won her the gold medal at the Cleveland International Piano Competition in 2009. END_OF_DOCUMENT_TOKEN_TO_BE_REPLACED