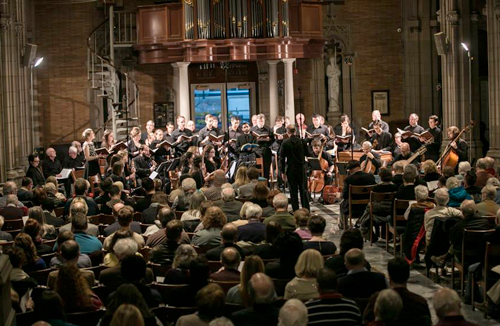 Trinity Cathedral in downtown Cleveland was packed on Friday evening for its annual Good Friday concert. This year Todd Wilson, the Cathedral’s director of music, presented Johann Sebastian Bach’s Passion According to St. John. It was musically a very fine performance, using period instruments, a chamber-sized chorus (mostly, more on that below) and a group of talented soloists who were all well-versed in historically-informed performance practices. The program booklet contained a lengthy, informative essay by musicologist Judith Eckelmeyer. END_OF_DOCUMENT_TOKEN_TO_BE_REPLACED 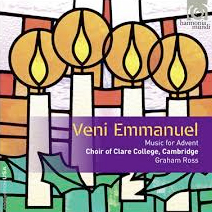 Don’t miss the opportunity to pick one up and play it frequently between now and December 24 and beyond — it’s a superb collection of music brilliantly conceived and wonderfully performed by the 30-voice ensemble of women and men, formed in 1971 under John Rutter and now directed by Graham Ross (Rutter still has a hand in the choir’s activities, having served as sessions producer, recording engineer and editor for the album, which was recorded at All Hallows Church, Gospel Oak in North London and at St. Alban’s Abbey in March and April of 2012.) END_OF_DOCUMENT_TOKEN_TO_BE_REPLACED

Northeast Ohio’s Les Délices has long been that rarest of beasts: a world-class organization so proud of its region (ours) and repertoire (distinct niches in pre-1800 music) that it never tries to be everything to everyone, paradoxically making a strong case for a broad, curious international following. In the December episode of its SalonEra series, the ensemble embraces its strengths and community to marvelous effect. END_OF_DOCUMENT_TOKEN_TO_BE_REPLACED

END_OF_DOCUMENT_TOKEN_TO_BE_REPLACED

Another I remember fondly is Gian Carlo Menotti’s Amahl and the Night Visitors.  Commissioned by NBC, the one act, made-for-television opera, premiered on December 24, 1951, at the network’s studios in New York’s Rockefeller Center. And now, through the wonders of technology, Cleveland Opera Theater has created a magical new production of the work which is available on demand through January 6, 2021 (Three Kings Day). END_OF_DOCUMENT_TOKEN_TO_BE_REPLACED

Jessen has now followed up with her second solo CD, Winter Chapel. Recorded on January 17, 2020 in Oberlin College’s Fairchild Chapel and available on Carrier Records, the album is a continuum in Jessen’s journey to push the musical boundaries of her instrument and herself as an improviser. END_OF_DOCUMENT_TOKEN_TO_BE_REPLACED