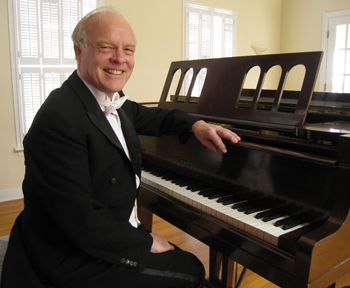 Most of us feel fortunate if we can make a dent in a single professional career. Thus it’s inspiring that Per Enflo has distinguished himself both as a theoretical mathematician and a concert pianist. His interest in those parallel but distinct disciplines dates from his childhood in Sweden, where he first showed an aptitude for mathematics and played his first full recital on a professional concert series at the age of 11.

As a mathematician, Enflo has cracked several seemingly unsolvable problems in functional analysis while teaching at Berkeley, Stanford, the École Polytechnique in Paris, and the Royal Institute of Technology in Stockholm. In 1989, he was appointed one of three “University Professors” at Kent State. In addition to teaching mathematics, he also worked on such cross-disciplinary issues as the zebra mussel invasion and the phosphorus loading of Lake Erie, anthropology and human evolution, and acoustics and noise reduction. Upon retirement in 2012, he moved back to Sweden, but still makes regular appearances in the States.

This weekend, Enflo will return to Northeast Ohio to play Mozart’s 17th and 21st Concertos with the Cleveland Virtuosi on the Chagrin Concert Series at Valley Lutheran Church in Chagrin Falls. END_OF_DOCUMENT_TOKEN_TO_BE_REPLACED

END_OF_DOCUMENT_TOKEN_TO_BE_REPLACED

What was that strange din coming over the live feed from Ludwig Recital Hall on Friday evening, July 23, as the Miami String Quartet filed onstage to play the third faculty recital of the Kent Blossom Music Festival? Accustomed as we were during the pandemic ban on live audiences to hearing the sound of no hands clapping, it was both startling and thrilling to witness a large crowd putting their hands together to welcome one of the Festival’s perennial favorites back for an in-person performance. END_OF_DOCUMENT_TOKEN_TO_BE_REPLACED

Practical reasons aside, there aren’t many ensembles who can put together an all-Mozart evening as elegantly as The Cleveland Orchestra. END_OF_DOCUMENT_TOKEN_TO_BE_REPLACED