On Saturday, July 27 at 8:00 pm at Blossom Music Center, Gautier Capuçon will once again join The Cleveland Orchestra in a performance of the same Concerto. Under the direction of Gemma New (replacing Bramwell Tovey), the program will also include Sibelius’ Finlandia as well as Elgar’s Enigma Variations in a side-by-side with Kent Blossom Music Festival Chamber Orchestra. That ensemble will present a pre-concert program at 7:00 pm led by Vinay Parameswaren, which features Mendelssohn’s Hebrides Overture and Ravel’s Suite from Mother Goose. Tickets are available online. END_OF_DOCUMENT_TOKEN_TO_BE_REPLACED 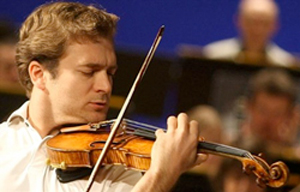 “I look forward to coming to Cleveland,” exclaimed French violinist Renaud Capuçon during a recent telephone conversation from his home in Paris. “I’ve been to the city before, but this is my debut with the orchestra, although I have heard them in Paris and in Lucerne with Franz Welser-Möst.”

On Saturday, July 5 at 8:00 pm at Blossom Music Center,Hans Graf will lead the Cleveland Orchestra in a concert featuring Sibelius’s Violin Concerto, Tchaikovsky’s Capriccio Italien and Dvořák’s Symphony No. 9 “From the New World”. (Graf replaces Jaap van Zweden, who is being treated for a shoulder injury). The evening concludes with post-concert fireworks.

A gracious and humble conversationalist, Capuçon thanks me for calling him at exactly the appointed hour. Like many violinists, Capuçon began studying Sibelius’s concerto at an early age, in his case at 14. “My copy has 1990 written in the small writing of a kid, so I’ve kind of lived with it. It’s one of those pieces that is exactly connected to the soul of the composer. It’s like his second symphony. You have pictures in your mind coming straight at you.”   END_OF_DOCUMENT_TOKEN_TO_BE_REPLACED