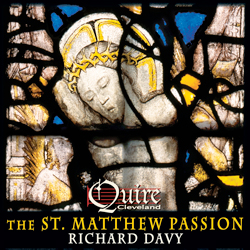 Recorded live at performances in April of 2017, Ross W. Duffin’s reconstruction of Richard Davy’s St. Matthew Passion was three decades in the making. The original work, the earliest polyphonic passion setting by a known composer, is uniquely but only partially preserved at the end of the early 15th-century Eton Choirbook. Duffin supplied music for eleven missing movements at the beginning of the work, as well as the missing voices for the next dozen movements for which only alto and bass parts survive. END_OF_DOCUMENT_TOKEN_TO_BE_REPLACED 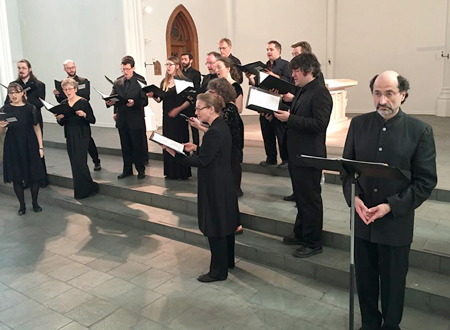 This past weekend, as the culmination of a three-decade labor of love, Cleveland scholar, professor, and conductor Ross Duffin conducted his reconstruction of 15th-century English composer Richard Davy’s St. Matthew Passion. Performances were given in Akron and Cleveland by Duffin’s own Quire Cleveland with Jeffrey Strauss and Owen McIntosh as the soloists. I heard the Sunday afternoon performance on April 9 at Historic St. Peter’s Church in downtown Cleveland. END_OF_DOCUMENT_TOKEN_TO_BE_REPLACED

The Cleveland Orchestra — or at least half of it — marked Valentine’s Day with a straight-through, 50-minute concert led by Belgian early music guru Philippe Herreweghe. The February 14 performance, marketed as a romantic evening of orchestral classics, played to a packed house (marketing works!). END_OF_DOCUMENT_TOKEN_TO_BE_REPLACED

Music is said to be a universal language, but it does speak with different accents. When you’re playing music by Jean Sibelius, it’s helpful to have a Finnish conductor on the podium, which is what made Susanna Mälkki’s pair of Cleveland Orchestra concerts so lucid and communicative earlier this month. END_OF_DOCUMENT_TOKEN_TO_BE_REPLACED

END_OF_DOCUMENT_TOKEN_TO_BE_REPLACED

Today’s touring string quartets hew to so uniformly high a standard that it’s often little individual touches that make ensembles stand out. The Polish musicians who make up the Apollon Musagète Quartet showed up at Plymouth Church in Shaker Heights for their debut on the Cleveland Chamber Music Society series on February 4 in matching plaid suits and black shirts. And jettisoning their jackets, they played standing (except for the cellist). END_OF_DOCUMENT_TOKEN_TO_BE_REPLACED