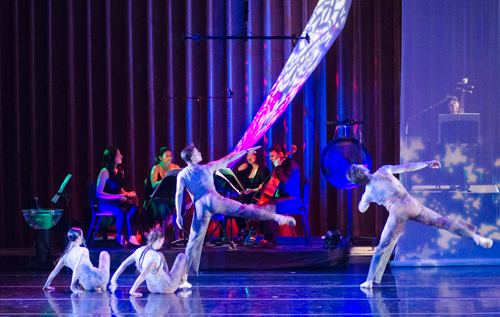 Ghosts from the past, the present and the future were brought to life on Saturday, June 28 in Kulas Hall at the Cleveland Institute of Music. But these were not the ghosts made famous by Charles Dickens but rather, through a 4,000 year-old Chinese tradition, where humans, spirits of the past and future and nature communicate with one another. All of this happened during ChamberFest Cleveland’s spectacular production of Tan Dun’s Ghost Opera for String Quartet and Pipa, [Chinese lute] with Water, Stones, Paper and Metal. Commissioned by the Kronos Quartet nearly 20 years ago, ChamberFest added another dimension to the haunting work with the world premiere of inventive and stylistically sensitive choreography by Groundworks Theater artistic director David Shimotakahara. END_OF_DOCUMENT_TOKEN_TO_BE_REPLACED 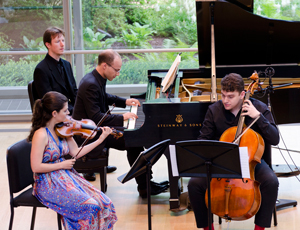 The contribution of “three” was the well-known Beethoven Piano Trio in D, opus 70, known as the “Ghost.” Like other chamber works from Beethoven’s middle period, the “Ghost” is intense, full of contrasts that surprise and excite. Violinist Diana Cohen (ChamberFest’s artistic and executive director), cellist Gabriel Cabezas, and pianist Orion Weiss gave a performance that brought out both the strength and the subtlety of the piece. END_OF_DOCUMENT_TOKEN_TO_BE_REPLACED 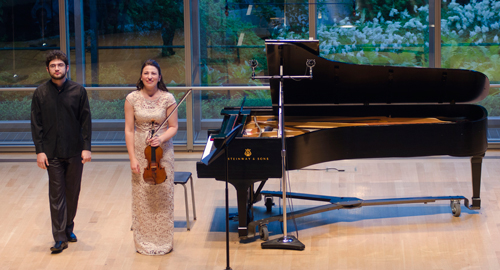 “I would write to you only by means of music,” said Robert Schumann in a letter to his wife, the composer and pianist Clara Schumann. Theirs is a storied coupling, beginning against the wishes of Clara’s father, ending with Robert’s mental breakdown and early death, and complicated by their close relationships with Johannes Brahms. All three being heart-on-their-sleeve Romantic composers, and with Robert’s letter in mind, it makes sense to explore this “Love Triangle” through their music.

On June 26 in the Cleveland Institute of Music’s Mixon Hall, ChamberFest did just that in a sold-out concert, presenting a work by each of the three with intermingled readings from their letters by ChamberFest Speaker Patrick Castillo (the above quote comes from those). END_OF_DOCUMENT_TOKEN_TO_BE_REPLACED 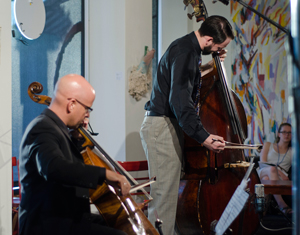 On June 25, at the midpoint of its ten-concert run, ChamberFest Cleveland relaxed into the Cleveland Heights art gallery-cum-wine and beer store The Wine Spot for some cheerful short works, wisely enhanced by amplification. For who wants to hear stodgy old Brahms in such a setting? (Though Brahms certainly loved his beer). END_OF_DOCUMENT_TOKEN_TO_BE_REPLACED 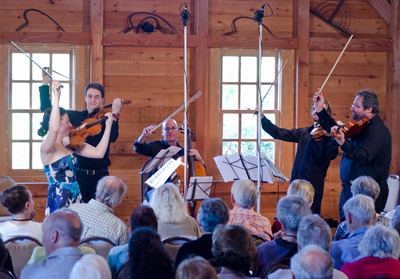 There’s barely room to swing a viola there, much less accommodate a grand piano, so Mirrors was devoted to music by Purcell, Britten and Mendelssohn for three, four and five string players who stood (except for the cellists) to save room, optimize sight lines and broadcast the music over the heads of the capacity audience, who were packed into the space on folding chairs. The seating was uncomfortable and the temperature a bit on the warm side, but the afternoon was otherwise completely delightful, with the bonus of free ice cream outside afterward. END_OF_DOCUMENT_TOKEN_TO_BE_REPLACED 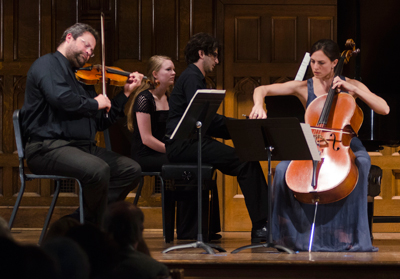 Although the 2013 ChamberFest Cleveland theme is [It’s] About Time, a secondary theme could easily be Variety is the Spice of Life. On Friday, June 28 at Harkness Chapel the superb ChamberFest musicians presented a thoroughly engaging program full of musical variety from start to finish titled A Tempo.

The technically commanding and musically sensitive cellist Robert deMaine began the evening with a high energy performance of Alberto Ginastera’s Pampeana No. 2, Rhapsody for cello and piano. The brief work depicting the Argentine pampas or treeless plains gave deMaine ample room to demonstrate his soulful side as well as his virtuosic prowess. Pianist Matan Porat was a keen collaborator, performing with rhythmic precision.

Porat, together with violinist Yehonatan Berick and cellist Julie Albers, were of one musical mind during their captivating performance of Ravel’s Trio in A minor. END_OF_DOCUMENT_TOKEN_TO_BE_REPLACED 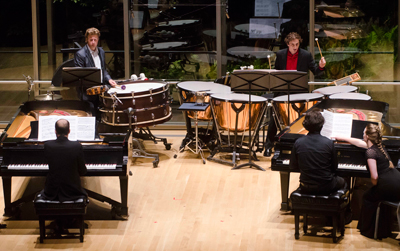 Stravinsky’s orchestration is rich with color and vibrant with rhythm. The two-piano version necessarily sheds a lot of symphonic hues (something that’s obvious from the opening bars, when that strained high bassoon solo gets translated to the keyboard), but the visceral quality of the composer’s groundbreaking rhythms only becomes enhanced on the piano. Add to that five timpani, bass drum, cymbals, gongs and other instruments culled from the orchestral batterie, and the effect is super-thrilling. END_OF_DOCUMENT_TOKEN_TO_BE_REPLACED 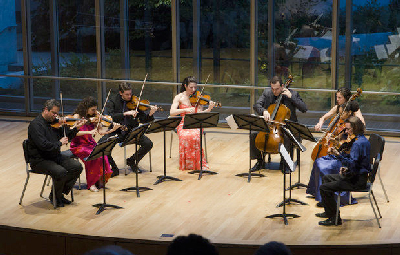 After some introductory remarks by Frank Cohen and Diana Cohen, the festival directors, the concert opened with a Baroque musical curiosity, Heinrich Ignaz Franz von Biber’s Battalia for ten string instruments and harpsichord continuo (3 violins, 4 violas, 2 double basses and harpsichord). In eight short movements, Biber depicts scenes of an army preparing for battle, fighting, and finally lamenting the lost and wounded soldiers. There are many “advanced” instrumental techniques: various kinds of plucking and bowing the strings, including the double bass wrapping a piece of paper around the strings and then bouncing his bow to create a sound that simulates that of a snare drum. END_OF_DOCUMENT_TOKEN_TO_BE_REPLACED 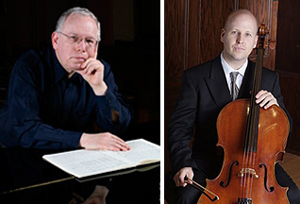 Oberlin piano professor Peter Takács was just finishing his decade-long project of recording all of Beethoven’s piano sonatas when he met Detroit Symphony principal cellist Robert DeMaine at the Charleston (SC) Chamber Festival. “We had one of those meetings of the minds which is not that common, but when it happens, it’s very, very nice. After I finished my solo sonata project I was trying to ponder what to do next. I could have rested and said, ‘OK, I’m done’, or I could have said, ‘Let’s do something completely different’. But I decided to stick with The Big Guy (Beethoven) and I thought about Robert because we had such a good time together.”

Takács emailed DeMaine, who was enthusiastic about preparing a series of paired recitals featuring Beethoven’s five cello sonatas and three sets of variations for cello and piano, all in two programs.

Takács has been there before, having performed the cycle three and a half years ago with Oberlin faculty cellist Darrett Adkins, but that pair of concerts took place on the same day. END_OF_DOCUMENT_TOKEN_TO_BE_REPLACED

END_OF_DOCUMENT_TOKEN_TO_BE_REPLACED

Rodgers & Hammerstein’s Cinderella was originally produced for television in 1957 — seven years after the animated Disney film was released — and starred Julie Andrews. According to the Rodgers & Hammerstein website, it was viewed by over 100 million people. END_OF_DOCUMENT_TOKEN_TO_BE_REPLACED

The story line has its origin in an 1855 play and an 1842 farce that Thornton Wilder mined for his 1938 play The Merchant of Yonkers. When that turned out to be a flop, in 1954 Wilder made the crucial decision to re-center the show around the character of the legendary marriage broker Dolly Gallagher Levi and renamed it The Matchmaker. END_OF_DOCUMENT_TOKEN_TO_BE_REPLACED

The Dodero Center for the Performing Arts at the Gilmore Academy in Gates Mills is one feature of an impressive campus. The auditorium is shallow, the stage is deep, and the ensemble played without a shell. Throughout the program, the sound, especially in instruments’ lower registers, tended to disappear. END_OF_DOCUMENT_TOKEN_TO_BE_REPLACED