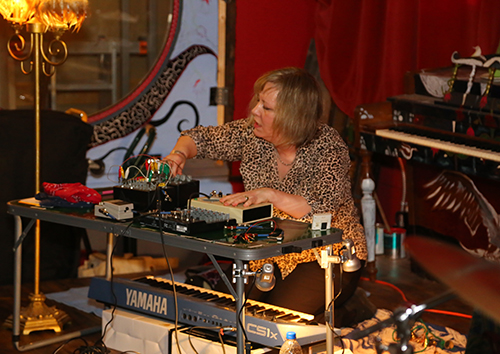 It’s hard to believe that it was only a year and a half ago that area audiences were introduced to the Cleveland Uncommon Sound Project (CUSP). With all of the high-quality programs they have produced since that time, the organization already feels like a trusted friend. Founded by saxophonist Noa Even and cellist Sophie Benn, CUSP’s engaging programming brings together the new music enthusiast and the new music curious. One way that is accomplished is through the annual Re:Sound Festival of New and Experimental Music, which ran from June 6 through June 9 and included six concerts featuring fourteen soloists and ensembles from across the United States at venues around the city. I attended the opening and closing events. END_OF_DOCUMENT_TOKEN_TO_BE_REPLACED

What do ‘Rollicking Monkeys Landing on Mars’ sound like? The answer to this and other curious musical prompts proposed by Pauline Oliveros can be heard on Thursday, June 6 when the Chicago-based saxophone quartet ~Nois performs her Thirteen Changes at 7:30 pm at Negative Space Gallery.

The concert kicks off the 2019 edition of the Re:Sound Festival of New and Experimental Music. The evening’s lineup also includes Cleveland’s Miralia/Stranahan Duo, and Detroit’s art-rock quartet saajtak. Click here to purchase tickets.

END_OF_DOCUMENT_TOKEN_TO_BE_REPLACED

Then, you heard all the qualities that make for a stunning soloist. Winner of the 2013 Cleveland International Piano Competition, Khristenko was back in town this month for a recital in Piano Cleveland’s summer series, Piano Days @CLE. And he couldn’t help but revel in the spotlight a little, even as he settled into a more collaborative role at the keyboard for his program, “Stanislav and Friends.” END_OF_DOCUMENT_TOKEN_TO_BE_REPLACED

Now, both pieces on Saturday might be called one thing, but they really sound like another. “Symphony” is a title that would fit Sergei Rachmaninoff’s Piano Concerto No. 2, as well as John Adams’ modern masterpiece for orchestra, Harmonielehre. END_OF_DOCUMENT_TOKEN_TO_BE_REPLACED

And the Orpheus effect has everything to do with who’s not onstage. The New York City-based group has rehearsed and performed without a conductor since its founding in 1972, and this means its members share the musical authority that typically rests with one person. Multiplied by a dozen or so, the interpretation of a piece suddenly emanates from every player, from the concertmaster to the double bass, resonating with a kind of collective power. END_OF_DOCUMENT_TOKEN_TO_BE_REPLACED