Called “top-notch in all respects” (Sequenza 21) and “an artist to be reckoned with” (Gramophone), violinist and violist Miranda Cuckson is highly acclaimed for her performances of a wide range of repertoire, from early eras to the most current creations. “The core repertoire is still very much a part of me as a musician, but I feel I need to relate to the time that I am living in,” the engaging Cuckson said by telephone when asked why she chose to follow new music as her career path.

“I also just have a bit of an adventurous streak in terms of discovering new means of expression and new ways of making sounds and ways of playing my instrument. And the more I got into that the more fascinating I found it.”

END_OF_DOCUMENT_TOKEN_TO_BE_REPLACED 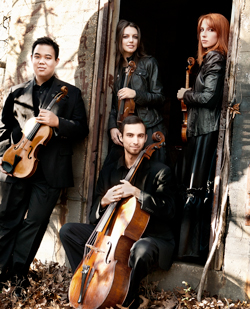 Like another area quartet (the Jasper, which began at the Oberlin Conservatory of Music), the Lindens went from CIM to a two-year residency at Yale, under the guidance of the Tokyo String Quartet. They have recently returned to the Cleveland area, full of energy about programming, community outreach, and repertoire. END_OF_DOCUMENT_TOKEN_TO_BE_REPLACED

With this work, premiered in 1907, Sibelius offered a bold departure from the explosive emotionalism so prevalent in late-Romantic era music. This symphony was a renewed embrace of Classicism’s purity of form and melody, and one that, oddly enough, left many initial audiences of the day somewhat bewildered. END_OF_DOCUMENT_TOKEN_TO_BE_REPLACED

After eating a Po’boy from The Dawg Bowl Cajun food truck, I caught the first half of Brian Culbertson’s show in The Connor Palace Theatre. END_OF_DOCUMENT_TOKEN_TO_BE_REPLACED