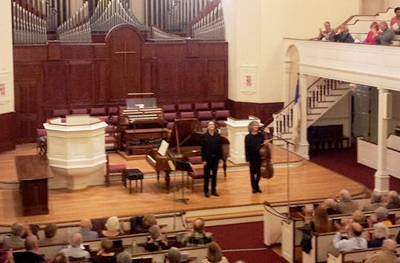 Those who thought they knew the Beethoven cello sonatas probably had to think again after last Tuesday’s recital by Steven Isserlis and Robert Levin on the Cleveland Chamber Music Society series at Plymouth Church in Shaker Heights. Over the last decade, the two performers have turned these pieces inside out and explored every crevice in their musical narrative. Heard in a performance like that on Tuesday evening, the results of that joint inquiry are a revelation. END_OF_DOCUMENT_TOKEN_TO_BE_REPLACED 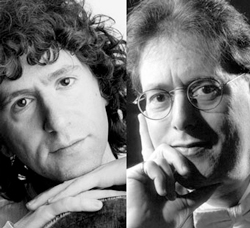 When British-born cellist Steven Isserlis and American fortepianist Robert Levin present their all-Beethoven program on the Cleveland Chamber Music Society series at Plymouth Church on Tuesday evening, March 10, the audience will come as close as humanly possible to hearing the three sonatas and a variation set as Beethoven conceived them. Isserlis will play a period cello with gut strings, and Levin will perform on a Wilhelm Leschen instrument built in Vienna in 1825.

Even that impressive level of authenticity might not perfectly suit these three sonatas. “Unlike the violin sonatas, the cello sonatas really span the entirety of Beethoven’s development as a composer,” Levin said in a telephone conversation from his home in Cambridge, MA, where he recently retired from the Harvard music faculty. “There are the two opus 5 sonatas from his early period, the great A-Major sonata, op. 69, from the middle period, and the visionary sonatas of op. 102 which inaugurate the late period.” END_OF_DOCUMENT_TOKEN_TO_BE_REPLACED 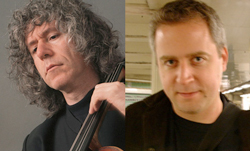 In Cleveland, Isserlis built his program around both of Brahms’s sonatas, separated by Liszt’s own arrangements of early songs and prefaced by Bartók’s First Rhapsody and Busoni’s Finnish folk song variations. In Oberlin, he drew back the curtains on what could have been a typical chamber music concert in Paris during the Belle époque — that brief cultural golden age between the 1870s and the first World War — including two out-of-period works that fit right into the spirit of the occasion.  END_OF_DOCUMENT_TOKEN_TO_BE_REPLACED 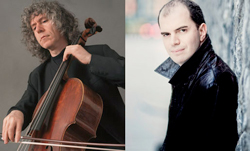 Here was the ground plan: both of Brahms’s cello sonatas, early and late, introduced by short pieces by Bartók and Busoni based on folk music and separated by two of Liszt’s late cello arrangements of his earlier songs. Liszt the revolutionary and Brahms the conservative didn’t get along at all during their lifetimes, but seemed as happily at ease with their proximity here as did Gerstein’s high-tech tablet computer (no page turner needed!) and Isserlis’s retro, gut-wound cello strings.  END_OF_DOCUMENT_TOKEN_TO_BE_REPLACED 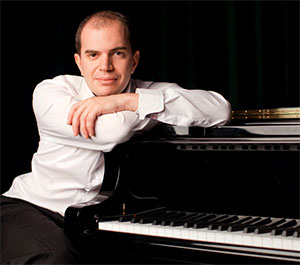 the saying goes, “if it’s not broke, don’t fix it” or perhaps more apropos to the world of artistic collaborations, “if you’ve got a good thing going, don’t change.” Cellist Steven Isserlis and pianist Kirill Gerstein will continue a long partnership on Tuesday, January 29 at 7:30 pm in Plymouth Church, when the Cleveland Chamber Music Society presents them in recital. The program brings together music by 19th and 20th century composers including Liszt’s Romance oubliée and Die Zelle in Nonnenwerth, Busoni’s Kultaselle, variations on aFinnish folksong, Brahms’s Sonata No. 1 in E minor and Bartók’s Rhapsody, as well as Brahms’s Sonata No. 2 in F-major. END_OF_DOCUMENT_TOKEN_TO_BE_REPLACED

Jackson began the program with a recitation of Langston Hughes’ poem “Helen Keller” — the first of five poems by Hughes that served as interludes between each piece on the first half. END_OF_DOCUMENT_TOKEN_TO_BE_REPLACED

Pianos with pins and tape on strings, a bass drum and tam tam, crotales, Almglocken, and vibes. Microphones were hooked up all around the instruments. The feed was sent to speakers around the room. Lighting designer Nicholas Houfek hung incandescent globes over the arrangement of instruments from thin black wires stretching across the beams. END_OF_DOCUMENT_TOKEN_TO_BE_REPLACED

From the podium, Elim Chan set an ambitious tone for the evening. The rising star conductor, here in her Cleveland Orchestra debut, has a commanding style, and every twist and turn in Saturday’s performance tracked closely with her baton. END_OF_DOCUMENT_TOKEN_TO_BE_REPLACED