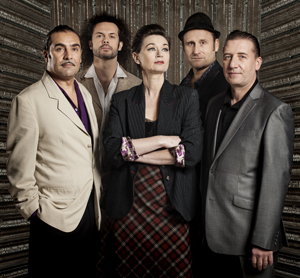 The group’s engaging style, described as “a unique mélange of colorful cabaret, elegant jazz, multicultural world music and sassy alterna-pop,” was in evidence from the opening Ce que j’amie, c’est le debut (what I like is the beginning). From the first to the final song during the 70-minute set, vocalist Belle du Berry’s sultry tone combined with all the right facial expressions rendered the printed English translations nearly pointless. Du Berry’s colleagues, David Lewis, trumpet and piano, François Jeannin, drums and backup vocals, Potzi, guitar, and Emmanuel Chabbey, bass, expertly created colorful lines that were far more than accompaniment but truly part of each song’s musical fabric. END_OF_DOCUMENT_TOKEN_TO_BE_REPLACED 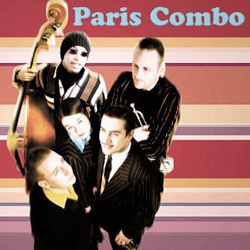 The story of Paris Combo began in the early 1990s when vocalist Belle du Berry, guitarist Potzi and percussionist François Jeannin began performing together in Paris as members of a quirky retro revue. In 1994 Australian trumpeter and pianist David Lewis joined the group and the group honed their sound while playing in cafes and on barges along the Seine.

Since the release of their debut CD in 1997, Paris Combo has released three internationally acclaimed CD’s and toured extensively in the U.S., Europe, Asia and Australia. Following a four year break, the group reunited in a rehearsal studio to compose new songs. After bassist Emmanuel Chabbey was added to the group’s lineup in 2011, Paris Combo returned to extensive touring and performing new material that would evolve into “5” their fifth CD. In conjunction with that release, on Friday, April 19, Paris Combo kicks off their 12-city US tour on the stage of the Cleveland Museum of Art’s Gartner Auditorium as part of the museum’s VIVA! & Gala series.

We spoke to David Lewis by telephone from Paris. END_OF_DOCUMENT_TOKEN_TO_BE_REPLACED 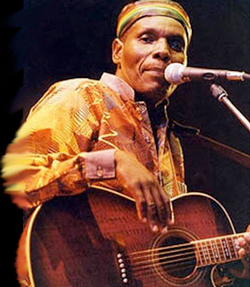 So it was no surprise when the soft-spoken 60 year-old musician says that he and his five-member band are looking forward to their performance in the Cleveland Museum of Art’s Ames Family Atrium on Friday, April 5th beginning at 9:00 pm. The Tuku Dance Party — Mr. Mtukudzi is affectionately called “Tuku” by his fans — is presented as part of the Museum’s VIVA! & Gala series. “The performance will be a big party and that will be very nice,” Mtukudzi chuckles. END_OF_DOCUMENT_TOKEN_TO_BE_REPLACED 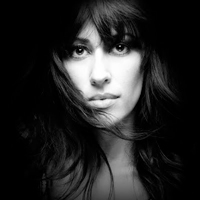 Fado, the music sometimes called the “Portuguese blues,” is a relatively conservative genre. But recently, fado, like the Portuguese navigators of the Renaissance, has begun to explore the globe, and Ana Moura has been at the forefront of that exploration.

Ana Moura’s concert Friday at Gartner Auditorium in the Cleveland Museum of Art showed an enthusiastic audience — a nearly packed house — how the sad ballads of fado can cross over into jazz, blues, and folk.

Moura’s deep contralto voice, throaty and intense, evoked the saudade—meaning, roughly, “yearning” — that is at the heart of fado.

Backed up by a five-man band, she gave her concert in a single set of about ninety minutes. END_OF_DOCUMENT_TOKEN_TO_BE_REPLACED

Now that United States forces have ended their occupation of Iraq, oud virtuoso Naseer Shamma has returned to touring in this country after a ten-year, self-imposed absence. He brought his excellent Al-Oyoun ensemble to the Cleveland Museum of Art’s Gartner Auditorium on Friday, March 15 for a remarkable performance on its VIVA! & Gala series that included one dramatic testimony to the events of the last decade during an 11-piece set that otherwise treated the large audience to both strange and familiar sounds and a wide range of musical forms.

Once a rarity, the expressive voice of the oud has become better known in the West — it recently evoked the Arabic music of Spain in the late fourteenth century during a performance by the Broken Consort at St. John’s Cathedral. In the hands of Naseer Shamma, it speaks eloquently both as a solo instrument and as a member of the traditional Iraqi takht or ensemble, which in Gartner last Friday included the Qanun, an 81-string zither, the Nay or end-blown flute in several sizes, the Riqq or Arab tambourine, a bass viol and two violins (19th century latecomers from Europe). END_OF_DOCUMENT_TOKEN_TO_BE_REPLACED

Why is it that Fado, the traditional soulful music of Portugal, has been embraced by audiences around the world? “I think more people are trying to discover new musical sounds that can make them feel different things and Fado has [a way of doing that],” says Fado superstar Ana Moura. On Friday, March 22nd beginning at 7:30 pm in Gartner Auditorium, Ana Moura will share the music from her latest album Desfado and other traditional Fado songs as part of the Cleveland Museum of Art’s VIVA! & Gala series.

We spoke to Ana Moura by telephone in California, and talked about her new album, growing up in a musical family, and her past musical projects with the Rolling Stones and Prince. We began by asking her how she describes the Fado sound? END_OF_DOCUMENT_TOKEN_TO_BE_REPLACED 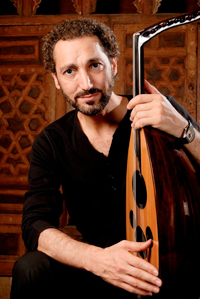 There is no one path that leads a musician to choose their instrument. But for Iraqi oud virtuoso Naseer Shamma it might have been predestination. “At five years old I asked my family to send me to a teacher to learn the oud,” Naseer Shamma told us by telephone from his hotel in New York. “They told me you are a child, the oud is for old people. You can play accordion or guitar. But I said no! I want to play the oud. I don’t know why.”

On Friday, March 15 beginning at 7:30pm in the Cleveland Museum of Art’s Gartner Auditorium, Naseer Shamma & Al-Oyoun Ensemble will make their Cleveland debut as part of the museum’s VIVA! & Gala series. The concert is part of Shamma and his ensemble’s first US tour in over a decade which includes stops in Washington DC, New York City and Columbus. END_OF_DOCUMENT_TOKEN_TO_BE_REPLACED

The Cleveland Orchestra’s second performance of the new season on Sunday afternoon, October 17 at the newly renamed Mandel Hall at Severance Music Center was just such an occasion. If the ensemble’s return to public concerts under the baton of Franz Welser-Möst wasn’t enough reason to light a bonfire, the Cleveland debut of a new work written for one of the Orchestra’s most popular soloists, and the swan song of one of its longest-serving members added extra fuel to the celebration. END_OF_DOCUMENT_TOKEN_TO_BE_REPLACED

Cleverly, CityMusic’s latest concert led listeners through these changes one step at a time. “Musical Matrix” took transformation as its theme, and each piece on the October 2 program at the Maltz Performing Arts Center (the second of two performances) put its spin on the subject. END_OF_DOCUMENT_TOKEN_TO_BE_REPLACED