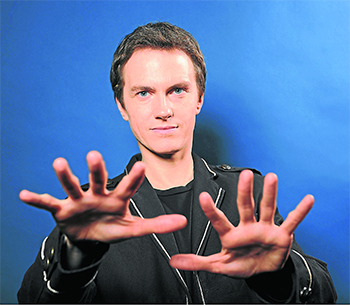 French pianist Alexandre Tharaud will step in on short notice for Piotr Anderszewski on the Oberlin Artist Recital Series this Wednesday evening, April 3 at 7:30 pm in Finney Chapel. Anderszewski has withdrawn from his current recital tour due to illness. Tickets for the cancelled recital will be honored at the door, and new ticket buyers can reserve online here.

On Wednesday, Tharaud will play J.S. Bach’s so-called Goldberg Variations, followed by a question and answer session moderated by Oberlin piano professor Robert Shannon. The popular title of the work refers to the tale — now regarded as spurious — of a harpsichordist named Goldberg who is supposed to have appealed to Bach for a work to entertain his insomniac patron during sleepless nights.

One of the only Bach works printed during his lifetime, the 1741 copper plate engraving by Nuremberg publisher Balthasar Schmid is titled “Keyboard Exercise, consisting of an ARIA with diverse variations for harpsichord with two manuals.” The bass line of the aria, a lovely little Sarabande that Anna Maria Magdalena Bach entered in her notebook around 1740, provided Bach with the basis for thirty variations of extraordinary variety, ending with a Quodlibet or humorous mashup of two German folk songs. “It’s been so long since I’ve seen you” and “Cabbage and turnips have driven me away” herald the reprise of the original Sarabande.

Eleven of the variations are specified to be played on two manuals, presenting a challenge for pianists who set out to play them on a single keyboard. In 2016, Tharaud recorded the Goldberg Variations on the ECHO Klassik label. Watch a brief promotional video here.

Tharaud is at home in a vast swath of repertoire ranging from the Baroque to the newly-composed. Cleveland and Oberlin audiences heard him last September in the U.S. premiere of Hans Abrahamsen’s Left, alone for piano left hand and orchestra with Franz Welser-Möst and The Cleveland Orchestra both at Severance Hall and in  Finney Chapel. His most recent recording, released last fall, comprises the last three of Beethoven’s piano sonatas.

A writer as well as a performer, Alexandre Tharaud has two books to his credit: Piano intime: conversations avec Nicolas Southon (Philippe Rey, 2013), and Montrez-moi vos mains (“Show me your hands,” Grasset, 2017). He has played himself in Michael Haneke’s 2012 film, Amour. 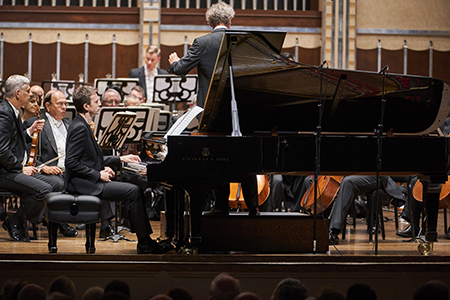 I had the sudden opportunity to speak with Tharaud the evening before his Oberlin performance. The pianist had just arrived in Montréal, a city he discovered at the age of 17. He loved it so much that he bought an apartment there which serves as his retreat for a few weeks at a time. “Paris is beautiful and my family is there, but it’s very stressful. When I come here, I feel quiet and I can practice piano. I have a lot of friends here.”

After his recital in Oberlin on Wednesday, Tharaud will play back-to-back performances of the Goldberg Variations in Fort Worth on Thursday and Friday, then return to Montréal to solo with the Orchestre Symphonique in Mozart’s 21st Concerto later in April.

Alexandre Tharaud was happy to step in for Piotr Anderszewski, “a very good friend of mine and one of the best pianists of our time.” He was philosophical about recital cancellations. “It happens in a pianist’s life. Sometimes my friends are sick and I will play for them — it’s a big family. And it gives me an opportunity to come back to Oberlin.”

The pianist recalled his earlier appearance with The Cleveland Orchestra in Finney Chapel. “I remember that the acoustics are very good, and I also remember that it was very hot onstage and it was difficult to play. But I only had to perform for 25 minutes. The Orchestra was very professional. They didn’t say anything about the heat and they played the entire concert.” I joked that at least he only had to play with his left hand, and Tharaud suggested that he might have used his right hand to hold a fan.

Tharaud took up the Goldberg Variations eight years ago, and has played them over 200 times. “I write down a list on the last page of my score.” How does he prepare for the keyboard equivalent of running a marathon? “This isn’t like other concerts. Usually I don’t travel the day of a concert. I prefer to be very quiet, practicing in the morning and resting in the afternoon — and I don’t want to talk to anyone. When I play the Goldberg Variations, the concert starts the day before in a kind of meditation. I’m talking with you now, but I’m already concentrating on the concert.”

The pianist went on to say that when you play this piece, you have to be very honest with yourself and with the audience — to be naked onstage and just play as you are. “Maybe that’s the most difficult thing to do, but it’s the most important.”

I bring up the inevitable name associated with the Goldberg Variations — the late Canadian pianist Glenn Gould. “It’s very difficult to play this piece after him because the world discovered the work through Glenn Gould. We have six different recordings by him so it’s difficult to forget his playing and his sound. On the other hand, he was from another planet. Maybe it’s better to hear the Goldberg Variations played by a harpsichordist just to clean out your ears. I don’t ask the audience to forget Glenn Gould, but just listen without expectation. Be open and free. When I’m onstage with this piece, I always think that I’m not playing alone — every person in the hall is playing with me. It’s like a big chain in which I’m just a small link.”

Published on ClevelandClassical.com April 1, 2019. Revised on April 2 to incorporate a conversation with Alexandre Tharaud.

END_OF_DOCUMENT_TOKEN_TO_BE_REPLACED

Rodgers & Hammerstein’s Cinderella was originally produced for television in 1957 — seven years after the animated Disney film was released — and starred Julie Andrews. According to the Rodgers & Hammerstein website, it was viewed by over 100 million people. END_OF_DOCUMENT_TOKEN_TO_BE_REPLACED

The story line has its origin in an 1855 play and an 1842 farce that Thornton Wilder mined for his 1938 play The Merchant of Yonkers. When that turned out to be a flop, in 1954 Wilder made the crucial decision to re-center the show around the character of the legendary marriage broker Dolly Gallagher Levi and renamed it The Matchmaker. END_OF_DOCUMENT_TOKEN_TO_BE_REPLACED

The Dodero Center for the Performing Arts at the Gilmore Academy in Gates Mills is one feature of an impressive campus. The auditorium is shallow, the stage is deep, and the ensemble played without a shell. Throughout the program, the sound, especially in instruments’ lower registers, tended to disappear. END_OF_DOCUMENT_TOKEN_TO_BE_REPLACED