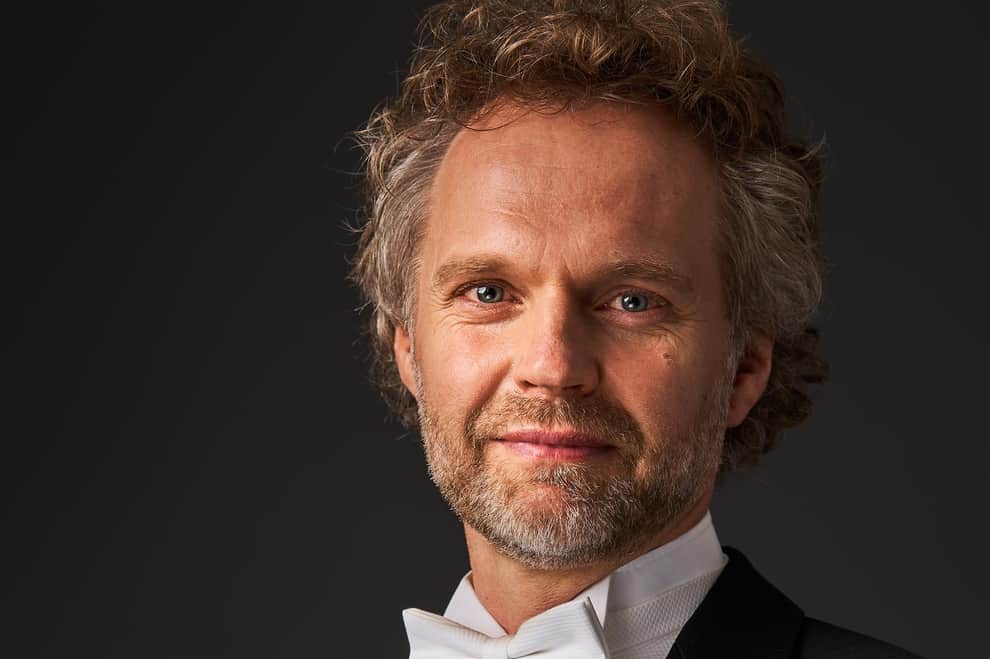 Speaking with the conductor by phone in Cleveland this past Wednesday, I began our conversation by telling him that I had a wonderful conversation with Stefan Jackiw, who was singing his praises (read the article here). Especially how sensitive the conductor’s ear is with regards to color, which Jackiw noted is quite important in the concerto’s passacaglia.

Thomas Søndergård: I must say that in particular the strings of this orchestra impress me. And since you’ve mentioned the passacaglia — in that moment — their sound is so warm and gentle. Yes, it is a fabulous orchestra in many ways.

Mike Telin: I understand that you and Stefan have worked together a few times.

TS: Yes. We did the Britten in Scotland  just a month and a half ago. So it will be nice to do it again.

MT: The Stravinsky — I feel that if you only know the suites you don’t really know Firebird.

TS: [he laughs] I can only agree. Every time I get the chance I do the whole ballet because for me it’s the links between the famous bits that makes the piece for me. And the complete ballet is not done  that often.

MT: Could you talk about that inner music?

TS: It’s so descriptive. And the skills of Stravinsky — this young composer who gets this chance to write music for ballet and you can tell that he’s a person who has a heart and an ear for writing for the stage. It’s very much like Strauss and Prokofiev — the theater is so much a part of their music making.

And for Stravinsky, he wrote these large sections where he’s obviously describing a certain scene onstage. Then there are these very bare moments that describe everything in between and I find that to be so incredible — many times it’s just one instrument playing. And I just love Stravinsky’s feeling for harmony. You can tell he’s a composer who composes at the piano, so he needs to hear the sounds.

He was 27 years old when he wrote Firebird. To be so very young and to have his sense of blending instruments. For example there’s a solo viola, English horn, and oboe blending, and that sound is just so beautiful. And to think that three years later he wrote Rite of Spring.

MT: You could argue that Firebird was the piece that started it all for Stravinsky and Diaghilev.

TS: So true. I was in Venice a few years ago and I went to Sravinsky’s tomb, which is next to Diaghilev’s. His was full with used ballet slippers and on Stravinsky’s, on a little corner of the stone on the ground, was a little drawing of a Firebird. It was clear that it was by a child who wanted to go there and say thank you. It was so touching to see.

MT: When were you first introduced to Stravinsky and to Firebird?

TS: I was 15 or 16,  just before I left the town where I grew up and went to Copenhagen.  There was not a lot that I didn’t take with me, but the two weeks before I came to Cleveland I was cleaning out the attic and I found the LPs of the three ballets that I loved so much when I was a child. It’s quite funny that you asked that question. Because when I saw the LPs it all came back to me.

MT: If you don’t mind, I’d like to switch topics. You began your musical career as a percussionist — what made you want to go from the back of the stage to the front?

TS: Two things — it was mainly just to dig deeper into the music that made me pick up the scores. And little by little people asked me to guide them through the music. In the beginning it was friends and colleagues and then it took off and I started conducting symphony orchestras and operas. And, I was missing legato. I’m sure you can understand that with percussion instruments there’s not so much legato. So the longer lines for me are somehow easier to create when conducting then when playing percussion.

MT: It was a good decision. This season you’re debuting with [in addition to Cleveland, Baltimore, Cincinnati, and St. Louis] and returning to a number of orchestras [Minnesota, Houston, and Chicago] and conducting Elektra at the Royal Danish Opera.

TS: It’s fantastic. And I enjoy it when I can stay in [North America] for a while — I was in Houston last week and next week I go to Chicago — which makes it a little easier to cope with jet lag.

MT: Congratulations on your appointment to the Minnesota Orchestra.

TS: Thank you. When I guest conducted there it was clear that we got along incredibly well. I think I’ve worked with 70 or 80 orchestras, and I can count on one hand the times I’ve been taken by the focus and concentration of the musicians. In the first five minutes I realized that we could go very far together. I felt there was  a strong link there and I felt the same at the first rehearsal this week with Cleveland. So we are on a beautiful journey there, and that’s the best start you can get.

One of the great experiences was when Osmo [Vänskä] kindly asked me to his private home and we had a good talk. It’s so rare that we conductors get to meet so it gave me a chance to get to know him. And it sent a signal that he is a serious artist who wants to hand over the position in the best possible way. It was very touching and I look forward to keeping in touch with him.

MT: Thanks so much for taking the time to talk — is there anything else you’d like to add?

TS: Just that it’s been a very touching year for me in many ways, and I wonder how I will look back on the pandemic. That was a moment of silence, which gave me time to read, but also I connected here with Cleveland, Chicago and the Berlin Philharmonic also asked me to conduct. So as much as it scared me — I got Corona myself — something positive came out of it, which is quite amazing.

I hope that all the music lovers will remember how much joy they had at the concert hall. And I hope to see a lot of people from Cleveland in Severance over the three days.

END_OF_DOCUMENT_TOKEN_TO_BE_REPLACED

The strings-only work by Berg has made relatively frequent appearances on the Orchestra’s programs. In 2021, the musicians recorded it for the In Focus series, and it appeared again on last year’s European tour. Friday’s rendition maintained the group’s characteristic light and effortless playing, each section blending as much as possible to echo the work’s original form as a string quartet. At fifteen minutes total, the piece is quite short, but the dense encoded musical meanings require some extra-attentive listening. Splitting up the three movements ensured that each one could be appreciated on its own. END_OF_DOCUMENT_TOKEN_TO_BE_REPLACED