If it’s late November, it must be time for Nicholas McGegan to return to Severance Hall. “This Cleveland thing is becoming a Thanksgiving tradition,” the affable conductor said during a recent telephone conversation. “This will be my third visit around this time in three years.”

Last week, McGegan led The Cleveland Orchestra in rehearsals and recording sessions of music from the late 17th to early 19th centuries. The program, titled “Inventions: Bach to Mendelssohn,” will be released on Thursday, December 10 at 7:00 pm as part of the Orchestra’s “In Focus” series and will be available exclusively on the Adella app. Click here for information. The stream will be accessible on demand until March 10, 2021.

Interestingly, McGegan’s visit to Cleveland was not on his schedule until a few weeks ago, when COVID restrictions necessitated a change in the Orchestra’s plans. The pandemic had also forced a change in McGegan’s calendar. “In October I was supposed to be on a month-long tour in the Netherlands and Belgium conducting the Mozart Requiem, and then I was to have had a month in Australia performing Messiah, and all of that disappeared.”

But as fortune would have it, opportunities began to knock at the door. “I’ve been to the Houston Symphony twice, now I’m coming to Cleveland, then going back to Houston and on to Dallas. None of this was on the books, so I am incredibly happy and grateful that the work I lost has been replaced.”

McGegan said the program, which was developed along with the Orchestra’s chief artistic officer Mark Williams, needed to adhere to health and safety mandates from the State of Ohio. “Not surprisingly there were all sorts of restrictions because of COVID — social distancing and the number of musicians you can have onstage.” He added that the program does include a “nod to the season,” with Handel’s Overture and Pifa Pastorale from Messiah and Corelli’s Concerto Grosso, Op. 6, No. 8 (“Christmas Concerto”).

Scored for three violins, three violas, three cellos, and harpsichord with a duration of around ten minutes, Bach’s Third Brandenburg Concerto was an obvious choice. “It’s not an unpopular piece and it’s a great way to let the spectacular string players of the Orchestra shine. That’s tremendous fun to me and I hope for them too.”

McGegan noted that the timing of the performance is, in a way, historically significant. “It so happens that in March of 1721, which is minus about four months, 300 years ago, Bach wrote the letter with the score of the six concertos, dedicating them to the Margrave of Brandenburg. So, this season is an anniversary for them.”

The score of the second movement, which consists of a single measure with two chords, allows McGegan an opportunity to show off his harpsichord chops and his improvisation skills. “I have no idea what I am going to do,” he said. “I just make it up and it will be different every time. Perhaps a little sarabande, but not a fugue, I’m not clever enough for that. I do know that it will end with the chords that Bach wrote. And I’ll be furiously nodding up and down to tell the players that it’s nearly over.” 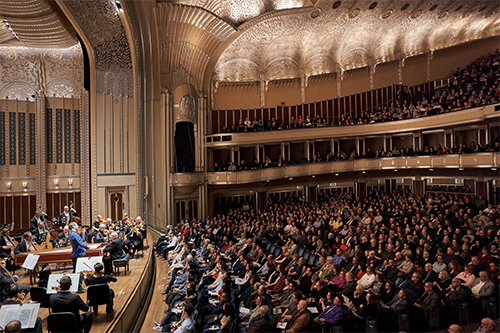 McGegan said that the six concertos are more about the dedication than the music. “It’s a marketing thing, and there’s not a lot of evidence that the Margrave ever opened the book.” He pointed out that much of the musical material was not newly composed, but revised from earlier works. “The first movement of the 3rd is the Sinfonia to Cantata BWV 174, and amazingly, that one has oboes and horns in it. It’s almost like a hunting piece. Bach was very good for the environment — he recycled quite a lot of stuff.”

Mendelssohn wrote his thirteen string symphonies between the ages of twelve and fourteen. The youthful works pay tribute to the symphonies of Haydn, C.P.E. Bach, and Mozart. “I can fully tell you that programming the 7th was Mark’s idea,” McGegan said. “He mentioned it, and it fit the bill timewise. I’ve done a few but never this one — it’s a remarkable piece and I think it will be a nice change for the musicians. What a wonderful man Mendelssohn must have been. He would be at the top of my guest list for dinner, as would Haydn. They’re such fun people and it comes through with everything they wrote.”

Circling back to health mandates, McGegan said that rehearsing while wearing a mask did take some getting used to. “You need to shout — in Houston I used a mic. And the musicians can’t really tell if you’re happy. I conduct a lot by smiling — I thought about sewing one onto my mask. But apart from the fact that one’s glasses tend to steam up, it’s just fine.”

The conductor said that streamed concerts are a wonderful way for orchestras to engage people from around the world. “I know for the last concert I did in Houston, people were buying tickets from the UK. And providing on-demand access to links — people in Australia who have never heard The Cleveland Orchestra can buy a ticket and hear it in their own time zone. It’s splendid how, out of necessity, people have come up with all of these inventive things to do. And thank heavens for the internet. Can you imagine how lonely we’d all be if we only had the phone, but now we can have Zoomathons.”

McGegan is also an avid mystery reader. If you’re looking for some good whodunits, have a look at the Musical Mystery Tour page of his website. The many titles listed include Francis Steegmuller’s (The) Blue Harpsichord, Elliot Paul’s Mayhem in B flat, Barbara Wilson’s The Case of the Orphaned Bassoonists, Rosemary Boyd’s Diva Detective, and Kerry Greenwood’s Murder and Mendelssohn.

“I’ve read all the books that are on the website, and they’re a lot of fun. There’s even one where Schubert is suspected of murder. But there are people who take it very seriously — they write in saying that ‘you missed this one and that one.’ When I used to travel a lot, I’d put them on my Kindle — it’s the best off-switch you can have in an airport.”

We spent the rest of our time talking about mysteries set in Cleveland.

Northeast Ohio’s Les Délices has long been that rarest of beasts: a world-class organization so proud of its region (ours) and repertoire (distinct niches in pre-1800 music) that it never tries to be everything to everyone, paradoxically making a strong case for a broad, curious international following. In the December episode of its SalonEra series, the ensemble embraces its strengths and community to marvelous effect. END_OF_DOCUMENT_TOKEN_TO_BE_REPLACED

END_OF_DOCUMENT_TOKEN_TO_BE_REPLACED

Another I remember fondly is Gian Carlo Menotti’s Amahl and the Night Visitors.  Commissioned by NBC, the one act, made-for-television opera, premiered on December 24, 1951, at the network’s studios in New York’s Rockefeller Center. And now, through the wonders of technology, Cleveland Opera Theater has created a magical new production of the work which is available on demand through January 6, 2021 (Three Kings Day). END_OF_DOCUMENT_TOKEN_TO_BE_REPLACED

Jessen has now followed up with her second solo CD, Winter Chapel. Recorded on January 17, 2020 in Oberlin College’s Fairchild Chapel and available on Carrier Records, the album is a continuum in Jessen’s journey to push the musical boundaries of her instrument and herself as an improviser. END_OF_DOCUMENT_TOKEN_TO_BE_REPLACED