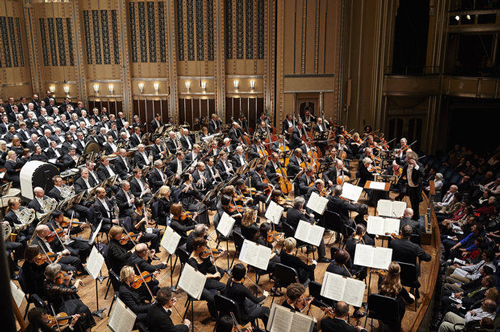 Pierre Boulez first treated Cleveland Orchestra audiences to Maurice Ravel’s complete ballet music for Daphnis et Chloé in 1970. As part of the orchestra’s 90th birthday tribute to the French composer and conductor who has maintained a long-term relationship with the ensemble, Franz Welser-Möst revisited Ravel’s wonderful score on Thursday evening for the first of three concerts in Severance Hall. Though — as the song goes — the weather outside was frightful, The Cleveland Orchestra and Chorus lit a delightful indoor fire full of sensual warmth and ecstasy.

At some 55 minutes, Daphnis is the longest piece Ravel ever wrote and the most elaborate in its orchestration and level of compositional detail. Though the two popular suites the composer extracted from the full-length ballet deliver its second and third parts relatively intact in two more compact packages, to hear the whole score at Severance Hall for the first time in 44 years is to take a thrilling journey that puts its better-known highlights in context. By the time you reach the third part with its magnificent evocation of dawn (preceded as in nature by a riot of birds) and its orgiastic final dance, you feel you really understand what the story has all been about, even without the benefit of dancers.

A pastoral idyll populated with shepherds and cowherds, complicated by a love triangle and a pirate raid and eventually unsnarled by the intervention of the great god Pan, Daphnis et Chloé deserved more of a place in early twentieth-century musical history than it got in 1912.

Upstaged by the scandalous premiere of Diagliev’s adaptation of Debussy’s L’après-midi d’un faune that hit the boards two weeks earlier, diminished by its end-of-season run of only two performances, and eclipsed by Stravinsky’s Le sacre du printemps the following season, it’s easy to forget how groundbreaking Ravel’s score was at the time, particularly in terms of its rhythmic experimentation, which had dancers coping with irregular beat patterns a full year before Sacre took that idea even further.

One groundbreaking innovation in 1912 was the wordless chorus that sang both off and onstage. The Cleveland Orchestra Chorus — for once not having to worry about its diction — added wonderful color and texture to the orchestral mix with its open- and closed-mouth vocalizations. Climaxes blended voices and instruments into a rich and powerful ensemble of surround sound.

Returning to the stage to acknowledge the enthusiastic ovation at the end, having already acknowledged soloists, Welser-Möst brought whole sections of the orchestra to their feet for bows. Among those was the percussion group, including keyboardist Joela Jones, who provided important punctuation on celesta and glockenspiel, and Marc Demoulakis, who skillfully cranked the Eloiphone or wind machine. That curious device — the large white object in the photo — spins a rotating cylinder against a canvas sheet, imitating pretty closely the sounds Mother Nature was making outside on Thursday evening.

Ravel admired Mozart for his precision and clarity, so the earlier composer’s final symphony, No. 41 in C, was a logical choice to open this weekend’s programs. Welser-Möst and the reduced ensemble gave a festive, sturdy account of the “Jupiter” in an approach that drew its excitement rather more from the imposition of energy than by highlighting the intensity of what lies under the surface of the music. Boulez might have taken a different tack, especially with the permutations of the fugue subject that inspired Mozart to such interesting harmonic turns in the finale. It’s fun to speculate.

Photo by Roger Mastroianni courtesy of The Cleveland Orchestra.

With this work, premiered in 1907, Sibelius offered a bold departure from the explosive emotionalism so prevalent in late-Romantic era music. This symphony was a renewed embrace of Classicism’s purity of form and melody, and one that, oddly enough, left many initial audiences of the day somewhat bewildered. END_OF_DOCUMENT_TOKEN_TO_BE_REPLACED

After eating a Po’boy from The Dawg Bowl Cajun food truck, I caught the first half of Brian Culbertson’s show in The Connor Palace Theatre. END_OF_DOCUMENT_TOKEN_TO_BE_REPLACED