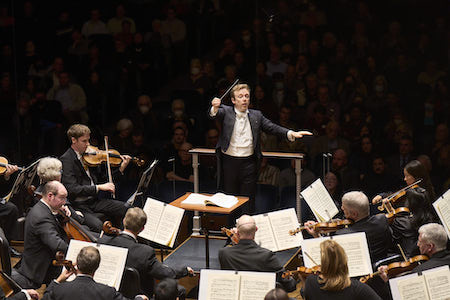 It was a good thing that preparations for last weekend’s Cleveland Orchestra concerts started seasons ago. The ambitious and challenging program wouldn’t have been possible without some serious planning, and that meant thinking well ahead of the first performance on October 20. A huge ensemble of more than 100 players, including a couple of unusual instruments, came together at Severance Music Center on Thursday — and this was an expert group.

The musicians’ skill and experience went beyond a simple mastery of the evening’s two works, Jörg Widmann’s Viola Concerto and Richard Strauss’s An Alpine Symphony. Pulling off both pieces — each a production in itself — required an instinctive grasp of the composers’ overall styles, and the players had that knowledge in spades.

For the Strauss, everyone had been training. The Orchestra has made a recent project out of the composer’s tone poems, recording a trio of them last fall and taking the same set on tour this summer. In a way, it was all building endurance for An Alpine Symphony, the last and largest of these works and the one that pushes up against the limits of the genre.

Here, Strauss extends his signature treatment of musical themes to a vast and symbolic narrative. In telling the story of a day’s hike up and down a mountain, he appears to adopt the realist approach perfected in his earlier tone poems, deploying motifs that are precisely orchestrated and evocative of specific settings, characters, and events. There’s no shortage of colorful effects throughout An Alpine Symphony, from cowbells that call up a pastoral scene, to organ music that suggests a church nearby, to a wind machine and thunder sheet that together conjure a storm. 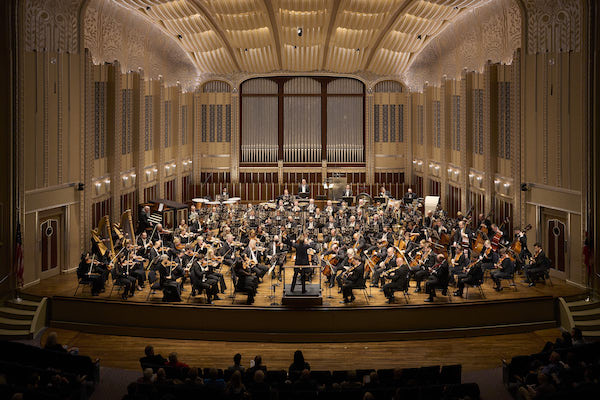 But the immense scale of the composition has a way of overshadowing these details, and An Alpine Symphony leaves the impression less of a particular story and more of a universal musical journey. The star of Thursday’s performance wasn’t any individual player but rather the Orchestra’s brass section, who gave Strauss’s piece an epic scope similar to a Bruckner or Mahler symphony. Guest conductor Daniel Harding led the demanding score with the same sort of sensitivity and heroism.

There was nothing earnest about the program’s first half, dedicated to Widmann’s Viola Concerto. This 2015 work proposes its own kind of hero’s journey, though audiences will immediately see that this is a contrived and ironic trajectory. The concerto requires a theatrical stage setup, with the ensemble spaced out in various clusters and the soloist tasked with moving between them — all outlined in a diagram that accompanies the score. 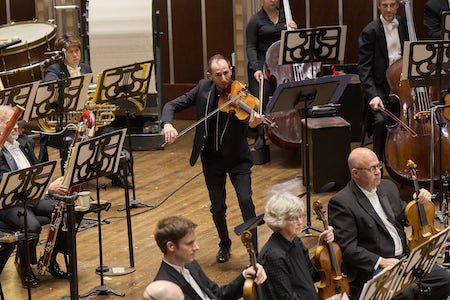 Cleveland is no stranger to this type of musical tricksterism from Widmann, whose pieces have been championed here during the tenure of music director Franz Welser-Möst. You can observe some of the composer’s sense of humor in his idiosyncratic use of the orchestra, which tends to place instruments like bass flute, contrabass clarinet, and tuba in the spotlight.

Widmann takes this joke to its logical extreme in this concerto, asking everything and more from an instrument that’s seldom the star of the show. Violist Antoine Tamestit handled the solo part on Thursday with disarming confidence, whether it was tapping the wood of his instrument, thrusting his bow in the air, unleashing a yell at the orchestra, or playing with a beautiful, expressive sound near the work’s end. You can only wonder what rehearsals were like.

END_OF_DOCUMENT_TOKEN_TO_BE_REPLACED

Supported by engagingly, yet simple staging by Cara Consilvio, a well-prepared cast of singers told the archetypal story of Cinderella with charm and flair. Framing the production was  a sparse but colorful set and wonderful lighting by Dave Brooks. END_OF_DOCUMENT_TOKEN_TO_BE_REPLACED