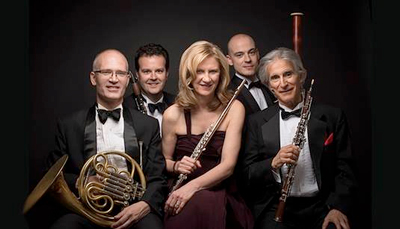 While there is no shortage of string quartets touring the world, the same does not hold true for wind quintets. However, there must be something going on in Northeast Ohio as the year 2017 has already brought the Imani Winds and the Berlin Philharmonic Wind Quintet to the area.

Formed at Tanglewood in 1961, the Dorian is one of chamber music’s longest continuously active ensembles. They have concertized in 48 states and Canada, toured Europe 18 times, and performed throughout the Middle East, India, Africa, and Asia. The ensemble made history in 1981, when they became the first wind quintet to appear at Carnegie Hall.

Continuing that tradition, bassoonist Adrian Morejon said in a recent telephone conversation that they are “thrilled” to be playing their latest commission, Amanda Harberg’s Suite for Wind Quintet, on Monday’s concert.

“I think it is going to be a great addition to the repertoire. We only did the premiere back in March but we’ve already played it quite a bit. We took it to Mexico, Las Vegas, Nebraska, New York, and now to Cleveland and then Erie. Audiences have a desire to hear more wind repertoire, and it’s nice to see wind players from all these regions responding to it so positively.”

When asked how they first came to know Harberg, Morejon chuckled. “I don’t mind telling you because we joke about it from the stage,” he said. “It was at a bar where Ben, our clarinetist, was celebrating his birthday. Amanda is good friends with Ben and his wife who’s a violist. Our flutist Gretchen and her husband Richard were also there. The whole social thing was happening and before we knew it, Richard proposed that we commission her to write us a piece. And then, because of the relationships involved, at the first rehearsal there was a huge sigh of relief. You never know what you’re going to get from any composer — but this is an amazing piece.”

Another Dorian tradition is performing Bach transcriptions. Next week’s concert will include a Dance Suite extracted from an arrangement of the complete Goldberg Variations by Henry Brant. Morejon said that since playing the entire piece would be a program in itself, they thought about ways to present parts of it.

“After looking at all the variations closely, we realized that a perfect number of them were in dance-suite style and we could create a nice dance suite that could stand alone. We switched the ordering of a few, but we start and end with the aria just like the original. It was a fun idea but we needed to make sure it was a good musical decision — we didn’t want it to sound like we just cut up the piece. We’ve performed it several times and received good responses from audiences and presenters.”

The Quintet’s horn player Karl Kramer-Johansen’s arrangement of Dvořák’s String Quartet in A-flat, Op. 105, is also a newer addition to the Dorian’s repertoire. “We’ve performed the Op. 51 quartet many times,” Morejon said, “and because of the proportions of slow to fast music, we’re finding that Op. 105 is not as exhausting to play. It has a lot of lively music and as wind players we appreciate that, but it’s still a long piece. We premiered it a couple of weeks ago in Nebraska.”

Morejon said that wind quintet transcriptions of works like the Dvořák help to fill a very large gap in repertoire. “Winds had their golden era with Franz Danzi and Anton Reicha. For a while there was a lack of activity, then in the 20th century things picked up again but with a very different style of quintet writing. The Dvořák comes from a period when the wind quintet was not fortunate enough to have repertoire.”

Having grown up listening to Dorian Quintet recordings, Morejon was delighted to be asked to join the group. “As a wind player, during my undergraduate years at Curtis, the goal was to get an orchestra job. And when I went to Yale I was fortunate to have a lot of wind faculty who had made careers in chamber music. That was a big turning point for me because it made me think about other options. These days the entrepreneurial musician is much in demand. You see musicians doing a little of everything.”

Morejon is the newest member of the Quintet as well as only the fourth bassoonist in their 56-year history. “Jane Taylor was a founding member and played in the group for 40 years. She was a real driving force behind the group, which is why other instruments have had more turnover while the bassoon hasn’t.”

END_OF_DOCUMENT_TOKEN_TO_BE_REPLACED

The portents weren’t good for the week of March 8: first the disorienting switch to Daylight time was to click in on Sunday, then a full moon would rise on Tuesday, then the 13th of the month was scheduled to fall on Friday. Midweek, the spread of COVID-19 added a spiraling series of postponements, cancellations, and shut-downs to an already unlucky period. Like other educational institutions, Oberlin College and Conservatory found themselves making decisions about how to proceed, only to change plans several times. END_OF_DOCUMENT_TOKEN_TO_BE_REPLACED

That old saw about absence making the heart grow fonder: how true it feels now! With concerts canceled to prevent the kinds of confined massing that facilitates the spread of COVID-19, musicians are suffering. Critics have already filed reports on the grim uncanniness of clear schedules and empty halls. Just before this writer’s exile from the scene, however, a spark of life shot skyward, and now stands as a last memory of live performance before social distancing. END_OF_DOCUMENT_TOKEN_TO_BE_REPLACED

The Cleveland Chamber Music Society sailed into relatively uncharted waters on March 3, hosting the Bay Area male vocal ensemble Chanticleer in “Trade Winds.” This musical voyage took its name from a triptych by Zhou Tian, part of a varied program that called in at multiple ports for Italian madrigals, settings of Ave Maris stella (“Hail Mary, Star of the Sea”), an Edwardian part song, a Portuguese Mass, songs from the Pacific, and English sea shanties. END_OF_DOCUMENT_TOKEN_TO_BE_REPLACED