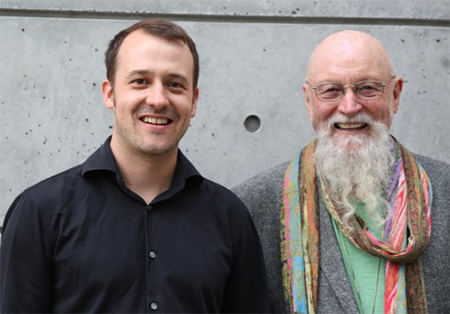 The film is in French, English, Mohawk, and Algonquin. Click here to watch a trailer. Tickets are available online.

In addition to filmmaking, Girard has received acclaim in the opera world. In 2013 he directed a new production of Wagner’s Parsifal, and his production of Der Fliegende Holländer (“The Flying Dutchman”) will open on the MET stage in December of 2019.

“The reason everything worked so well is that François is a huge lover of music,” Gyan Riley said during a telephone conversation. “He’s knowledgeable about all types of music, and he wanted it to be featured in a way that was natural and honest.”

The idea for the partnership was first discussed when Girard attended some events that Gyan Riley had organized for the opening of Brooklyn’s National Sawdust. “He met with my father and me, but at that point is was still just a pipedream. We kept in touch and eventually things materialized.”

Riley pointed out that the score is a combination of notated and improvised music which was recorded by the Kronos Quartet and Tracy Silverman during a session in California. Girard also had a specific piece in mind for the film. “The music at the opening, which is a recurring theme, is from a recording that was performed live in Italy a few years ago, which I think was one of the initial things that motivated François to have us work on the film. He always wanted that music to be used in the opening. It was interesting because although it is a good recording, it was live, so you couldn’t work with it in the same way you could a studio recording. But because there was something about the energy that he liked so much, it ended up being used in the film as it was.”

Riley said that he and his father received a script at the beginning of the project, but it was still in the early stages of development. “We had ideas for things that never ended up happening, just because of the way the film developed and was edited.”

Although Riley was a Sundance Composer Fellow in 2005, Hochelaga, Land of Souls is his first feature film. “After Sundance I was doing a lot of things, including being active as a performer. I didn’t pursue it, so this was a good re-entry into that world. The movie is a nice lens into the history of Montréal, and I hope people will see it through that lens.”

Would he do it again? “Absolutely. It was a really fun process for me. I found it very interesting. It was a pleasure to develop ideas with François and the entire team — when like-minded individuals come together and brainstorm, great things can happen.”

END_OF_DOCUMENT_TOKEN_TO_BE_REPLACED

The portents weren’t good for the week of March 8: first the disorienting switch to Daylight time was to click in on Sunday, then a full moon would rise on Tuesday, then the 13th of the month was scheduled to fall on Friday. Midweek, the spread of COVID-19 added a spiraling series of postponements, cancellations, and shut-downs to an already unlucky period. Like other educational institutions, Oberlin College and Conservatory found themselves making decisions about how to proceed, only to change plans several times. END_OF_DOCUMENT_TOKEN_TO_BE_REPLACED

That old saw about absence making the heart grow fonder: how true it feels now! With concerts canceled to prevent the kinds of confined massing that facilitates the spread of COVID-19, musicians are suffering. Critics have already filed reports on the grim uncanniness of clear schedules and empty halls. Just before this writer’s exile from the scene, however, a spark of life shot skyward, and now stands as a last memory of live performance before social distancing. END_OF_DOCUMENT_TOKEN_TO_BE_REPLACED

The Cleveland Chamber Music Society sailed into relatively uncharted waters on March 3, hosting the Bay Area male vocal ensemble Chanticleer in “Trade Winds.” This musical voyage took its name from a triptych by Zhou Tian, part of a varied program that called in at multiple ports for Italian madrigals, settings of Ave Maris stella (“Hail Mary, Star of the Sea”), an Edwardian part song, a Portuguese Mass, songs from the Pacific, and English sea shanties. END_OF_DOCUMENT_TOKEN_TO_BE_REPLACED