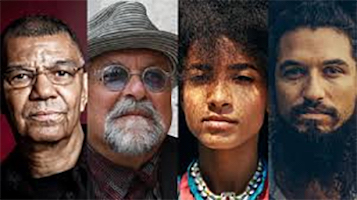 Mike Telin: From very early in your career, you had the opportunity to share the stage with some notable jazz musicians who came through town.

Joe Lovano: It was amazing and I have to give credit to my dad Tony “Big T” Lovano for opening the door for me, not only with his amazing sound and talent but also his incredible record collection. As a kid I was listening to the masters on all instruments, and that made me realize the different personalities of jazz. And before I knew it, I was starting to develop in that world.

MT: Since you had already established a name for yourself in Cleveland, why did you decide to go to Berklee?

JL: After high school I felt that I needed to go to the next level, and encounter some challenging situations outside of Cleveland. I wasn’t really thinking about conservatory, it’s just that there were a few folks who were teaching at Berklee that I wanted to encounter, like the amazing saxophonist Charlie Mariano. My dad had some records with Charlie on them. Unfortunately, when I got to Berklee he wasn’t there, but Gary Burton was, so I had a chance to study with some master players.

From its earliest time, Berklee was one of the only schools that had people on the faculty who were master players. They were sharing their experiences — Gary was there along with Herb Pomeroy, who played with Charlie Parker and had a big band.

MT: So Berklee was a good decision?

JL: Yeah, I also had some very close friends from Cleveland who went to Berklee with me — Ron Smith, a great vibes player, and drummer Carmen Castaldi, who’s on my new release Trio Tapestry. So Carmen, Ron, and I moved to Boston together and we all thrived in that situation. For example, hearing Miles Davis for the first time in a club in 1971 and hearing the Keith Jarrett Quartet, that gives you direction, and those were the cats I wanted to play with.

MT: Are there any others who inspired you?

JL: The Thad Jones/Mel Lewis Orchestra. I first heard them in 1970 in Severance Hall, and even then, I was trying to understand that music and figure out how I could get myself together enough to play in that band. And ten years later in 1980, I joined that band and played the Village Vanguard every Monday night for the next ten or eleven years.

As a young musician, you have to have vision and passion to move into tomorrow, and going to Berklee was a good thing for me. And moving to New York in the mid-‘70s was the next step after that. But my roots are in Cleveland, and I’m a Cleveland ambassador all around the world.

Born in Chicago, drummer, pianist, and composer Jack DeJohnette has been one of the most influential musicians for nearly six decades. And at the age of 76 he shows no signs of slowing down.

MT: You’ve had many projects over the years — how did you decide what to pursue, or did you simply follow the path as it presented itself?

Jack DeJohnette: A combination of both. Groups like Special Edition, which had Peter Warren, David Murray, and Arthur Blythe, enhanced my ensemble writing for horns. These were the young lions who were coming up at that time. Over the years that group developed with different personnel, but for me it always remained a group where I could figure out how many various ways I could write for an ensemble.

MT: You were one of the first to fuse jazz with rock.

JD: There were a lot of people integrating the two. There was a group called Free Spirit with Bob Moses and the late great Native American sax player and composer Jim Pepper. This was around the mid-‘60s when Charles Lloyd was coming on the scene, so there was a lot of cross-pollination going on. Miles came later, but Charles was there before Miles got there.

MT: How do you approach your role as a drummer?

JD: I’m a colorist. I see myself like a painter, so I shade the music and color it, play in and out of time. It’s about being a good listener, being aware of everything that’s going on around you, and knowing when to give more expression to the music. A lot of that has to do with me being a piano player and composer, but the piano came first. So I’m a complete musician.

MT: You started piano lessons at age four and found your way to jazz fairly quickly.

JD: I listened to it when I was a kid because my uncle loved jazz and I used to listen to his records. And when I was in my teens, he became a jazz DJ, so I had access to the current jazz records. In Chicago there was a lot of mainstream jazz and alternative jazz with organizations like Creative Music — which was Richard Abrams along with Roscoe Mitchell who started the Association for the Advancement of Creative Musicians. But I was there before that started, when they had what was called the Experimental Orchestra — The Art Ensemble of Chicago came out of that.

MT: What are your thoughts on young musicians following the conservatory route?

JD: I think the jazz studies programs are great and there’s a lot of great players coming out of those schools. The problem is, how do people make a living? You have to know how to work social media, especially if you haven’t established a name. You can go to New York, but the cost of living is prohibitive — people just can’t afford to do that.

A lot of young people stream their music and sell downloads, and they’ll print up a batch of CDs to sell at concerts. That works because people do want to support the musicians.

But it’s fun when you’re in school. You get all the stimulation playing in big bands and ensembles and writing music, and the schools do teach you about the music business. So one has to create their own methods of navigating through these waters. One has to think about how they see themselves in music. I’ve heard people say you should get a regular job and play music for fun, which has a point, but if you really want to do it full-time you have to think about it.