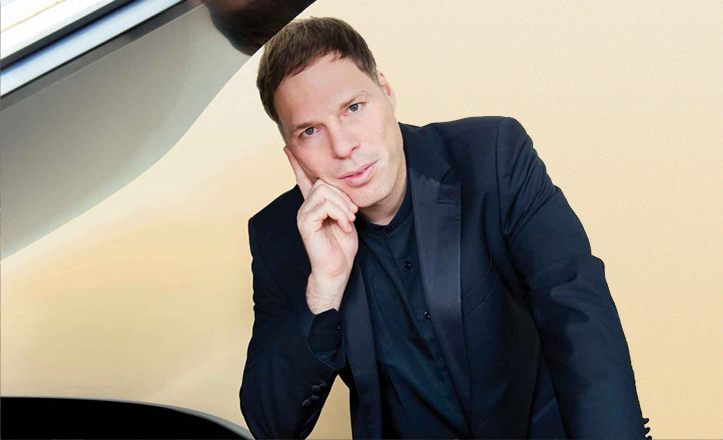 The delightful second concert of Tri-C’s free Classical Piano Series at the Cleveland Museum of Art in Gartner Auditorium on Sunday, November 18 featured Alon Goldstein. The program featured his gloriously precise pianism across three centuries from Scarlatti to Bernstein, including helpful speaking from the stage along the way.

After sharing how Domenico Scarlatti wrote his 500-plus single-movement sonatas as “exercises” in the possibilities of the keyboard, Goldstein sat down and delivered four varied examples. The opening c-minor sonata, K. 11, featured pliant hushed tones and calm forthright statements, while the following C-major sonata, K. 159, showed off his ability with hopscotch arpeggios and peppy “horn” fifths. The G-major sonata, K. 324, gave the pianist the opportunity to display smooth lines, while the final d-minor sonata, K. 120, sparkled with Herculean cross-hand jumps in a highly caffeinated musical landscape. He played the whole set with great care (and perfect trills).

Goldstein unfurled a stunning rendition of Beethoven’s “Moonlight” Sonata. This three-movement “sonata quasi una fantasia” is one of the composer’s most famous, and the pianist avoided cliché by maintaining a continuous, consistent rhythm and giving a clean, calm reading that enunciated its spooky ethos without histrionics. He maintained a beautiful tone with smooth phrasing, choosing not to dive into Beethoven’s violent tendencies. Goldstein’s unusually restrained, focused playing gave this music a surprisingly effective, clear hue.

Goldstein’s self-crafted Debussy triptych that came next was a revelation. He spoke about how the composer planned a “second Suite Bergamasque” to include Masques and L’Isle joyeuse. Goldstein stapled them together with another work from that time serving as the center: D’un cahier d’esquisses (“from a sketchbook”). The set showed Goldstein to be a master Debussy interpreter. His understated precision and wonderful handle on color brought a shining power to this beautiful music. He vigorously attacked the guitar-like gestures that appear in both the outer works and brought out the intoxicating chords and fragrant sea foam, while still keeping the music in check.

After intermission, Goldstein played a solo piano version of “The Masque” from Leonard Bernstein’s Symphony No. 2, “The Age of Anxiety.” This jazzy presto brought to mind the composer’s catchy, boisterous music for On the Town. Its almost boogie-woogie feeling mixed with Gershwin was six minutes of captivating piano music.

The final work was Schubert’s “Wanderer” Fantasy, written as a virtuosic showpiece. The composer built each of its four interlocking movements from the melody of his own song Der Wanderer. Goldstein played it with great skill and power, although it’s hard to be thrilled by repetitive music of such unheavenly length.

The Cleveland Orchestra’s second performance of the new season on Sunday afternoon, October 17 at the newly renamed Mandel Hall at Severance Music Center was just such an occasion. If the ensemble’s return to public concerts under the baton of Franz Welser-Möst wasn’t enough reason to light a bonfire, the Cleveland debut of a new work written for one of the Orchestra’s most popular soloists, and the swan song of one of its longest-serving members added extra fuel to the celebration. END_OF_DOCUMENT_TOKEN_TO_BE_REPLACED

Cleverly, CityMusic’s latest concert led listeners through these changes one step at a time. “Musical Matrix” took transformation as its theme, and each piece on the October 2 program at the Maltz Performing Arts Center (the second of two performances) put its spin on the subject. END_OF_DOCUMENT_TOKEN_TO_BE_REPLACED