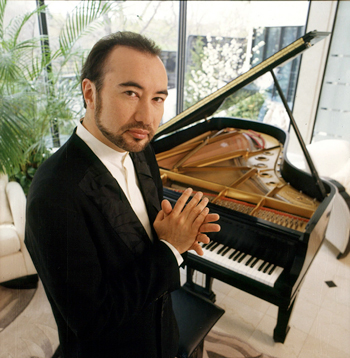 Last heard in Cleveland in September as one-third of the Montrose Piano Trio, pianist Jon Kimura Parker returned for a solo recital on Sunday, April 9 in Gartner Auditorium of the Cleveland Museum of Art. His unusual, brilliantly played program, “Passion and Pictures,” concluded the tenth season of Tri-C’s Classical Piano Series.

Parker got off to an impressive start with a set of three Rachmaninoff Preludes ranging from the dreamy (G Major, Op. 32, No. 5) through the bravura (g minor, Op. 23, No. 5) to the robust (B-flat Major, Op. 32, No. 2). In the second, the pianist made a striking transition back to the opening march.

Having established a general mood of virtuosic nobility, Parker continued with a dramatic reading of Beethoven’s “Appassionata” Sonata. Not so sharply articulated and full of surprises as some, Parker’s version was frequently softened by his use of pedal, but still arresting and full of character.

That set of pieces served up the Passion, while the second half of the program centered around musical Pictures — or in two cases, music from motion pictures.

“Warrior” conjures images of armed aggression with its insistent repeated notes, open fifths, and parallel chords. More static is “Memories In an Ancient Garden,” where the pianist plays chord clusters on both black and white keys, and strokes bass strings with his left hand. “Southern Sky,” which evokes the feeling of staring up at thousands of stars, concentrates on the treble end of the piano and includes special effects using the damper and una corda pedals. Parker vividly brought each of Louie’s images to life.

The pianist’s lovely playing of Maurice Ravel’s well-known Jeux d’Eau from 1901 flashed images of fountains across the virtual screen. Then it was time for the movies.

William Hirtz’s Bernard Herrmann Fantasy brought back cinematic memories with its invocations of scenes from North By Northwest, Mysterious Island, and Psycho, a medley of musical clippings Parker had great fun with.

That Fantasy had inspired the pianist to ask Hirtz, a compatriot from his Juilliard days, to rearrange his duo-piano suite of tunes by Harold Arlen and Herbert Stothart from The Wizard of Oz for a single performer — so he could play it anytime he wanted. Later, when densely-written pages of score began scrolling out of Parker’s fax machine, he said he almost began to rue that request to “his former best friend.”

The piece is beastly difficult — think piano bar music on steroids — but Parker brought it off in a swirling cloud of notes to end his recital. His encore, inspired by the cheering crowd, was Scott Joplin’s affecting little rag, Solace.