On Thursday evening, June 28, Dee Dee Bridgewater kicked off the 39th annual Tri-C JazzFest with a performance of her 2017 concept album Memphis… Yes, I’m Ready. The DIVA Jazz Orchestra (left) opened the night with original music, some of which will appear on their upcoming 25th anniversary celebration album in March. Each piece, composed by members of the band, featured various musicians as they sauntered up to the mic to take their solos. While the band never totally let loose, the second piece was James Bondian in character, and Tomoko Ohno’s piano solo was gorgeous. It melded into a clarinet solo with creative rhythms and intrepid harmonies, leading into one of the only truly grooving moments of the set.

The audience was clearly getting restless and frustrated after an extended awards ceremony and an inexplicably long set change, when saxophonist Kirk Whalum finally took the stage. He immediately lifted everyone’s spirits with the quip, “As we say in Memphis… sometimes the elevator, sometimes the shaft.” What followed was a powerful set with an expert arc.

After a breezy opening tune, “Another Beautiful Day,” Whalum wasted no time getting political with a moving performance of his song about gun violence, “Triage.” He explained that it was an example of how jazz can speak to existential reality and provide a space for catharsis in times of pain and loss. Whalum and Marcus Finnie began the piece together on sax and drums. The two musicians functioned as one organism, and when the band joined in, Whalum was still screaming through his instrument in an inspired solo.

Next the musicians were joined by vocalist Vaneese Thomas, daughter of soul and blues singer Rufus Thomas, in a stunning rendition of In This Life sung in French. Whalum continued to take us through a range of emotions with songs from his collection of albums titled The Gospel According to Jazz. Bassist Braylon Lacy and guitarist Dwight Sills played fantastically throughout the set, each taking exciting solos. The set ended with the moving song Rescue Me by John Stoddart, who joined the band on keys and vocals and pulled out beautiful moments of audience participation. The song was inspired by a T-shirt designed by a friend with the words “Can’t Make Me Hate.”

After another long pause, Dee Dee Bridgewater’s band took the stage with a funky beat provided by drummer Carlos Sargent, until Bridgewater came out from the wings dancing and full of energy. She had the audience on their feet, imploring us at multiple points to “get up and shake!” Her latest album is an homage to Memphis and all of its rich musical history, and includes songs by icons like Otis Redding, Elvis Presley, Al Green, B.B. King, and Gladys Knight. Bandleader and organist Frindell “Dell” Smith gave Bridgewater a dramatic introduction before she appeared, citing her many awards. Among them is a Tony, which Bridgewater certainly proved she was deserving of throughout her theatrical set. 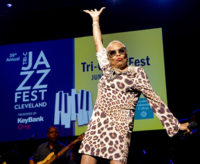 The show was an autobiographical tour of Bridgewater’s life growing up around the music scene in Memphis, and her selections were often equal parts song and spoken story. She strutted around the stage provocatively, singing about everything from teenage love and lust to the importance of voting and making your voice heard. One of her many theatrics included a flirtation with bassist Barry Campbell, another a choreographed Staples Singers cover with back-up singers Monet Owens and Skylar Jordan (whom she fondly referred to as “Brown Sugar”). Even amidst all the dancing and joking around, Bridgewater’s voice never faltered, her unique vibrato and twirling melismas impressive.

Whalum made a guest appearance for Don’t be Cruel, made famous by Elvis Presley. Bridgewater and Whalum often played this song together when they were younger, but this time, Bridgewater was flanked by two adoring saxophones, with Bryant Lockhart joining in on the fun. The two saxophonists teased each other with dueling solos. Guitarist Charlton Johnston provided several classically bluesy solos, and trumpeter Curtis Pulliam didn’t disappoint.

Jackson began the program with a recitation of Langston Hughes’ poem “Helen Keller” — the first of five poems by Hughes that served as interludes between each piece on the first half. END_OF_DOCUMENT_TOKEN_TO_BE_REPLACED

Pianos with pins and tape on strings, a bass drum and tam tam, crotales, Almglocken, and vibes. Microphones were hooked up all around the instruments. The feed was sent to speakers around the room. Lighting designer Nicholas Houfek hung incandescent globes over the arrangement of instruments from thin black wires stretching across the beams. END_OF_DOCUMENT_TOKEN_TO_BE_REPLACED

From the podium, Elim Chan set an ambitious tone for the evening. The rising star conductor, here in her Cleveland Orchestra debut, has a commanding style, and every twist and turn in Saturday’s performance tracked closely with her baton. END_OF_DOCUMENT_TOKEN_TO_BE_REPLACED