“It’s been a busy year for us,” Jake Swanson said during a recent telephone conversation. “Sarah and I had a residency in Oslo, Norway, and my first CD was released earlier this month. And we’re excited to be returning to the Brownbag Concert series.”

Swanson will open the program with Eric Ewazen’s Down a River of Time. Ewazen, a Cleveland native, composed the work in 1999 at the request of noted oboist and CIM graduate Linda Strommen, who commissioned it as a memorial tribute to her father.

“I came across the piece when Eric was doing a residency at Jamestown Community College where I teach, and I was asked to perform on a concert featuring his music,” Swanson recalled. “I looked through his catalogue, and didn’t find a lot for saxophone. But I did find this lovely oboe concerto that I thought would sound wonderful on soprano saxophone. So I got in touch with Eric. He was really kind, and gave me the green light to perform it. After hearing the performance he was even kinder, and let me record it as part of the new CD. So far I’ve performed with piano, so Wednesday’s concert will be the first time it has been performed on soprano sax with string orchestra.”

Swanson described Down a River of Time as an extremely melodic, neo-Romantic work that takes listeners on a walk through the process of losing a loved one. “The first movement, “past hopes and dreams,” is about the life that we have built with somebody, and the fact that we don’t plan on losing them. The second, “and sorrows,” is about grieving, and the third, “in memories of tomorrow,” references the joy that we will eventually receive from having them as positive memories.” 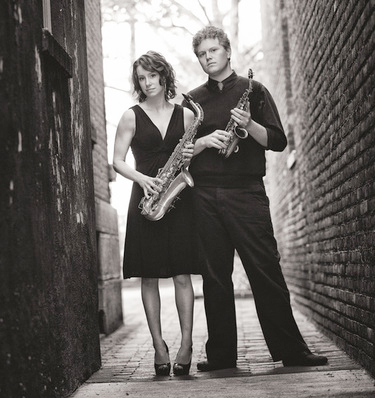 Following the Ewazen, Sarah Marchitelli will take center stage for a performance of Alexander Glazunov’s Concerto for Alto Saxophone and String Orchestra. “It’s the last work that he wrote, and one of the few pieces from the Romantic literature that was originally written for saxophone,” Swanson pointed out. “It’s also one of only a few saxophone concertos where everybody recognizes the composer’s name, which doesn’t happen a lot in our world.”

Marchitelli and Swanson will conclude the program with Swedish composer Erland von Koch’s two movement Concerto Piccolo. “It’s called ‘Piccolo’ because it’s only about twelve minutes long,” Swanson said. “It was written for Sigurd Raschèr and his daughter Carina, who was one of Sarah’s and my teachers. This will be only the second time we have played it, but it’s a work that has lived in the saxophone world for some time.”

Regarding their residency in Oslo, Swanson explained that Ny Musikks Komponistgruppe is an organization dedicated to the training of young composers. “Their idea of a youthful composer is not what you might think. It’s not about how old you are, but rather about how long you’ve been composing. So there are a range of ages, but everyone has been composing for five years or less. They bring in guest artists, and plan the commissions for the composers. We collaborated with six composers, took part in workshops, and played concerts. It was a lot of repertoire to learn very quickly, and it will result in some recordings being released. It was an amazing experience.”

The cimbalom was the feature of the show, an instrument capable of taking on many personas. Its performer, Chester Englander, has shaped his career around the instrument, and has inspired composers to write more repertoire for it, some of which was presented on the program. END_OF_DOCUMENT_TOKEN_TO_BE_REPLACED

You wouldn’t expect that acoustic from a glance at the nave, which is wide and long, but not especially lofty. But when I guest conducted a local amateur choir and professional orchestra in Beethoven’s Mass in C there a few years back, during the first rehearsal we released the final chord of the “Gloria” and listened in astonishment for the next several seconds. The sound continued to roll down the space like the big wave that surfers dream about. END_OF_DOCUMENT_TOKEN_TO_BE_REPLACED