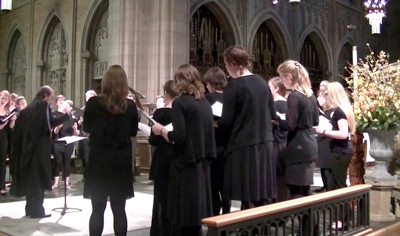 Hearing choral music in Trinity Cathedral is always enjoyable, but the experience can become truly magical when the performers are refined and well-disciplined. This was the case on Wednesday, May 3 when the Collegium Musicum Oberliniense, under the direction of Steven Plank, performed a captivating program titled “Touches of Sweet Harmony.” The concert was presented as part of the Cathedral’s popular Brownbag series.

The program, which explored aspects of Tudor music and its influences on the sacred choral repertoire of the 19th and early 20th centuries, began with William Byrd’s O Lord, make thy servant Elizabeth, the Queen. As they would throughout the performance, the ensemble sang with a pure, blended sound and dynamics ranging from whispered to full-bodied.

A reduced, un-conducted ensemble sang Robert Whyte’s Regina coeli with clear diction, while the full Collegium forces captured the essence of Byrd’s haunting motet Ne irascaris and its themes of the Babylonian captivity and desolation of Jerusalem.

The influences that Tudor music had on the later composers were brought to the fore during the pairing of poet/composer Thomas Campion’s Never weather-beaten sail from 1613 with C. Hubert H. Parry’s setting of the same poem from 1916.

Those influences were further highlighted during the “Kyrie” and “Agnus Dei” from Byrd’s Mass for Four Voices, which were followed by the same movements from Ralph Vaughan Williams’s 1922 Mass. Here the forty-voice ensemble produced a glorious sound befitting forces twice its size. A well-deserved shout-out to soprano Christine Jay, alto Linnea Scott, tenor David Boeckh, and bass Noel Warford for their fine quartet work during the Vaughan Williams.

Supported by engagingly, yet simple staging by Cara Consilvio, a well-prepared cast of singers told the archetypal story of Cinderella with charm and flair. Framing the production was  a sparse but colorful set and wonderful lighting by Dave Brooks. END_OF_DOCUMENT_TOKEN_TO_BE_REPLACED

END_OF_DOCUMENT_TOKEN_TO_BE_REPLACED

The music isn’t easy to play, either. Over the course of two hours, all of the musicians brought fantastic focus to the unrelenting tricky rhythms and countless layers of parts, all of which require a high level of individual responsibility. Even in the moments of calm, the accompaniment remains perpetually unsettled. Adams — who made a sprightly presence on the podium — combines minimalist, repeating motives in gradual layers, which eventually become so dense they overwhelm the senses. Lisa Wong deserves special mention for her thorough preparation of the Cleveland Orchestra Chorus, as does Jennifer Rozsa for the Children’s Chorus, which made a brief but memorable appearance in the last few minutes. END_OF_DOCUMENT_TOKEN_TO_BE_REPLACED