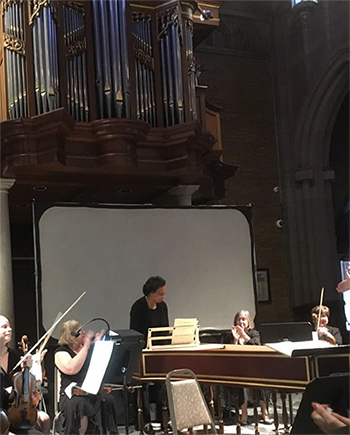 Over the centuries, the music we now gather under the umbrella of the “classical” tradition has had many benefactors and venues. While universities have long incubated modern music and civic concert-presenting organizations have sustained Romanticism, religious institutions dominated patronage from the earliest musical notation through the dawn of the 18th century, and houses of worship often served as concert halls.

Trinity Cathedral continues to champion the arts, and last week, it presented Baroque music in the sort of space where the featured composers might have felt comfortable.

Director of music Todd Wilson served as master of ceremonies on Wednesday, May 15, which served as the Gala Finale for the 41st season of the Cathedral’s Brownbag Concert Series. Wilson also ascended into the organ loft to perform as soloist in the first piece, Handel’s Concerto in F. Guest conductor Horst Buchholz led the Trinity Chamber Orchestra while a video projected the otherwise invisible Wilson in action.

The Cathedral’s resonant acoustics helped blend the ensemble’s fresh, vital sound, and to cut through the texture, Wilson chose a sprightly flute stop for the first movement. The strings held together despite the brisk pace and the fragmentary nature of their parts. In the second movement, the feathery gentleness of the strings contrasted with Wilson’s striding chords, enlivened by anguished dissonances. The brief third movement gave the soloist a chance to pull out a silvery stop, and the fourth, while on the slow side for its character, built to a beautiful final cadence.

Cellist Richard Narroway joined the orchestra for C.P.E. Bach’s Concerto in A, written three years after the death of his father. The piece sounds recognizably Baroque in style, yet the virtuosity expected of the soloist rivals anything written before the 19th century.

In the first movement, Narroway teetered on the edge of difficult runs before plunging into them with confidence. He took care to shape and shade individual notes, even as a long series of them flew by. Leaning into certain phrases, he emphasized the grain in the cello’s distinctively warm sound.

Next, Bach leaves the Baroque behind and produces a slow movement of almost Romantic darkness. Mutes gave the string orchestra sound an appealing distance and hollowness. Reflecting the character of the movement, Narroway introduced an active vibrato to lend palpable emotionality to his high, lyrical solo melodies. The third movement brought a return to the high energy of the first.

Harpsichordist Nicole Keller sounded assured from the start of the elder Bach’s Concerto in d. With wonderfully subtle timing in unaccompanied solo passages and steadiness in her interactions with the orchestra, Keller conveyed growing intensity despite the instrument’s limited dynamic range. Glowering and groaning in the slow movement, the orchestra almost buried the soloist — wonderful as the Cathedral’s acoustics are, they did not favor the harpsichord. Keller nonetheless emerged victorious, and continued into a third movement that began with a whirlwind. Adding an edge of ardor to her lines, the keyboardist brought the concert — and season — to a vivacious conclusion.

Published on ClevelandClassical.com May 29, 2019.

END_OF_DOCUMENT_TOKEN_TO_BE_REPLACED

Supported by engagingly, yet simple staging by Cara Consilvio, a well-prepared cast of singers told the archetypal story of Cinderella with charm and flair. Framing the production was  a sparse but colorful set and wonderful lighting by Dave Brooks. END_OF_DOCUMENT_TOKEN_TO_BE_REPLACED