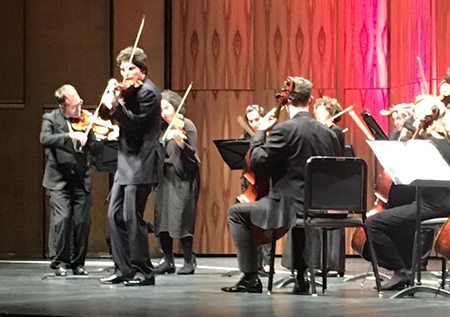 Orpheus Chamber Orchestra, the New York-based conductorless ensemble, joined violinist Augustin Hadelich in an impressive program of string music by Irving Fine, Haydn, Schubert, and Tchaikovsky at Akron’s E.J. Thomas Hall on Wednesday evening, March 28. Their assured playing on the Tuesday Musical series proved that you don’t always need a baton-wielding leader out in front to inspire an excellent sense of ensemble — though sometimes it can be a good idea from an interpretational point of view.

Irving Fine’s Serious Song: A Lament for String Orchestra might have seemed an odd choice to open the program, but it immediately demonstrated Orpheus’ powers of synchronicity. Labeled “an extended aria for string orchestra” by the composer, who wrote the piece in 1950 for the Louisville Orchestra, the elegiac work melds late-Romantic harmonies with objective modernism. Upper strings standing, the fifteen members of Orpheus kept closely in touch with each other, weaving and swaying to Fine’s expressive music.

Augustin Hadelich, the star of this program, shone in Joseph Haydn’s Concerto No. 1 in C. Dated 1765 and written for the young Italian concertmaster of the Esterházy orchestra, the concerto has one foot firmly planted in the Baroque period, while the other points in the direction of Viennese classicism. That implies a stylistic struggle, but the piece is a delightful synthesis of the two styles, and gives the soloist abundant opportunity to show his mettle.

Hadelich made easy work of the first movement’s double-stops and arpeggiations, brought expressive vocal qualities to the Italian serenade-like slow movement, and dashed stylishly through the contrasting solo passages of the finale. Hadelich was all smiles and charm as he interacted with his Orpheus colleagues, and they returned the favor handsomely. 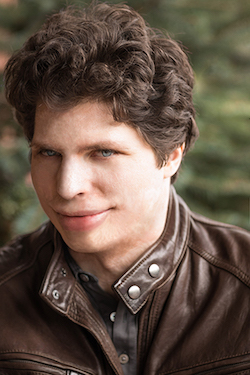 If the Haydn concerto owed some of its inspiration to Vivaldi, Schubert’s Rondo in A paid no small tribute to Mozart in its virtuosic figurations for the solo violin. Hadelich brought those passages off elegantly, acknowledging each return of the Rondo theme with a knowing nod to his backup band.

The audience was rapt — and rapacious for more Hadelich. He gave them an extra piece as a parting gesture: a flawless performance of Paganini’s Caprice No. 19.

The second half of the program was devoted to Tchaikovsky’s Serenade for Strings, another piece that successfully melds two styles — in this case Mozartian orderliness combined with hyper-expressive Romantic melodies. Beginning with an imposing “Piece in the form of a Sonatina,” the Serenade moves on to a Viennese — or perhaps a Parisian — waltz, pausing for a reflective Elegy before ending with a finale crafted from Russian folk music.

Orpheus took a surprisingly aggressive approach to the Tchaikovsky, playing with outsized tone as though the Orchestra wanted to sound like a symphonic string section — or perhaps they were just trying to make a dent in the acoustic of E.J. Thomas Hall. This is where the intervention of a conductor might have helped steer the performance in a more genial direction. As a finale, it took some of the gloss off the evening, which might have ended more memorably with the Haydn concerto.

Music director and conductor Daniel Meyer built his playlist around Cleveland themes and scenes. “Exploration CLE” made use of engaging selections from the classical canon and beyond that celebrated “what makes Cleveland so special.” Happily, he and his musicians avoided constructing a visual slide show, choosing to let the music speak for itself. END_OF_DOCUMENT_TOKEN_TO_BE_REPLACED

You could see the relationship at work on a practical level. Repertoire for two players at the same piano requires a certain choreography. There’s just one of each pedal to share, and the hand crossings left and right — which can be so fun to watch a soloist pull off — get more complicated when another person’s involved. At times, Pompa-Baldi drew a hand away from the keyboard and into his body, making room for Friscioni, and at the close of a few delicate phrases, the two were crouched together over the same final notes at one end of the instrument. END_OF_DOCUMENT_TOKEN_TO_BE_REPLACED

The signature sounds of these famous film scores are not so much John Williams’ invention as allusions to other classical pieces. The foreboding half-step from Jaws, growing more and more furious in the cellos and basses, shares something with Dvořák’s “New World” Symphony and Bartok’s Miraculous Mandarin. END_OF_DOCUMENT_TOKEN_TO_BE_REPLACED