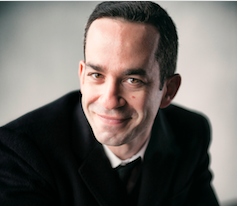 “This was fun, let’s do it again sometime” — what we all say after any gathering. And sometimes, we really do mean it.

That was the case after pianist Inon Barnatan and the Calidore String Quartet collaborated for the first time a few years ago, exploring Bach’s keyboard concerti. As Barnatan told me during a recent phone call, “It was such a joy to make this music together that we decided we have to do it again. So here we are.”

On January 22 at 7:30 pm at E.J. Thomas Hall, Barnatan and the Calidore will revisit Bach during a concert on Akron’s Tuesday Musical series. The program begins with selections from The Art of Fugue, then turns to the keyboard concertos No. 1 in d, No. 7 in g, No. 4 in A, and No. 5 in f. A pre-concert conversation with the musicians takes place at 6:30 pm, and tickets are available online.

One thing that will be different this time around is that the Calidore (violinists Jeffrey Myers and Ryan Meehan, violist Jeremy Berry, and cellist Estelle Choi) have climbed into a new stratosphere of accomplishment. In 2018 they joined Barnatan in the exclusive club of Avery Fisher Career Grant winners — Barnatan was a 2009 recipient.

“What’s happened to them in the last couple of years is incredible,” Barnatan said. “They’ve become one of the most sought-after string quartets in the country, and I’m lucky that they still want to do this concert. The gamut of what they do is fantastic and exciting, and I hope we continue working together.” 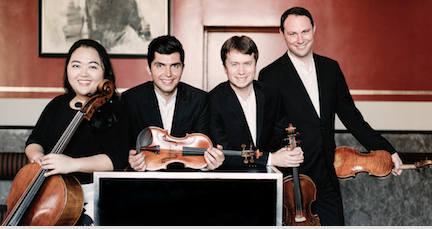 In addition to his recent collaborations with artists like Renée Fleming and Alisa Weilerstein, a big piece of news for Barnatan is his new position as Music Director of the La Jolla Music Society Summerfest.

“It’s an amazing festival in San Diego that I’ve been going to for years, and this year we have a new a brand new hall and are planning a pretty interesting season,” he said. “A lot of my favorite people are coming to play some of my favorite music. But we’re also having a kind of sandbox to explore things that really interest me as a performer and a consumer of music.”

Barnatan began our discussion of next week’s program by noting that when Bach wrote his keyboard concertos, the piano did not yet exist. What’s more: “A lot of the keyboard concertos were actually versions of other works like violin concertos,” the pianist said. “I think for Bach, the concept of instrument was fluid. So there are a lot of layers of transcription here, which gives you an opportunity to think about how you would approach that. And with this chamber version for piano and string quartet, we get to explore certain aspects of the concertos even more.”

Barnatan has lots of experience playing these works with bigger ensembles. “I toured with the Academy of St Martin in the Fields once playing the d-minor Concerto sixteen times in a row. I’ve also played it with symphony orchestras.”

How about on earlier keyboard instruments? “I’ve never played them on the harpsichord, although that would be an interesting experience,” he said. “Playing Bach on the piano is something that I struggled with for many years. There’s the question of how to approach it stylistically. Do you try to make the piano sound like a harpsichord? Or do you embrace the fact that it’s a totally different instrument, to such an extent that you’re basically making a transcription? It’s something that changes every time I play these pieces. And there’s the same issue, but to a lesser extent, playing it on modern string instruments with modern bows and techniques.”

But one of the great things about Bach, Barnatan said, is that you can play his music on virtually any instrument. “And people have. With The Art of Fugue, he didn’t actually specify which instrument should play it, and it’s been done by anything from saxophone quartet to vocalists. So there’s a lot of liberty in terms of instrumentation — the music just kind of speaks for itself, even if you play it on an iPhone,” he said with a laugh.

In laying out these four concertos in a row, separated only by an intermission, Barnatan has in mind a certain arc, though not one that’s chronological. “I almost want to create a single big piece, and through keys and contrasts and all these sorts of things, make a journey from beginning to end.”

The concertos vary in style and length. “The shortest is only nine minutes long — the entire concerto — and the longest is twenty-one minutes,” Barnatan said. “There’s quite a gap of expression, not only in terms of the music itself but also the scale of it. When I first decided to put some of these concertos together many years ago, it kind of struck me how well they go together — and how rarely you hear more than one of them in a concert.”