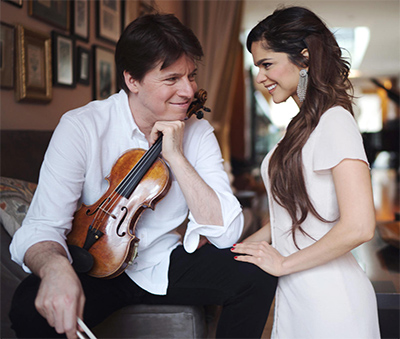 The evening is also one of the first stops on their debut tour as a married couple. And remember that Valentine’s Day is right around the corner. Click here for tickets.

The concept for their program — “Voice and the Violin” — began to take shape during the pandemic. “It actually worked in our favor,” Larisa Martinez said during a telephone interview. “We didn’t have a honeymoon because I had my Carnegie Hall debut four days after the wedding. Then we were both so hectic and in different countries, so the pandemic was almost a silver lining — which is how this program was born.”

In a separate interview, Joshua Bell said that creating a program for the two of them was inevitable. “We both respect each other’s musicianship. We’re married to each other so we were together in the house and somehow the lockdown helped give it a kick-start. It was a chance to work on some new arrangements and to look for little gems for voice and violin. And now it’s finally coming to fruition.”

The violinist and soprano are both excited to be working with pianist Peter Dugan. “Having Peter with us makes the program a more intimate, salon type of experience, which was certainly common in the 19th  century,” Bell said. “And much of the music, like the Schubert Sonatina that I’m playing, lends itself very well to that feeling, which I love.”

Martinez, who described the program as beautiful, and full of romantic music that is perfect for Valentine’s Day, said that having a pianist gave them the opportunity to present art songs, including Schubert’s An die Musik. “I’m also singing an art song from Puerto Rico — Narciso Figueroa’s Mi Rancho — which I am very excited about because I had an orchestration made for it, but it was written for piano so I’m excited to do it the way it was intended.”

Both musicians agreed that finding repertoire for voice and violin can be challenging. “In the past I’ve taken her repertoire and put it on the violin,” Bell said. “I did an album called Voice of the Violin many years ago which was just that. But there’s not a lot in the repertoire.”

One “little gem” they did discover is Mendelssohn’s “Ah, ritorna, età dell’oro” from Infelice. “I had never heard of it,” Bell said, “And Mendelssohn being one of my favorite composers, I was pleased to find a  piece that he actually wrote for piano, voice and violin.”

Another is Louis-Ferdinand Hérold’s “Jours de mon enfance” from Le pré aux clercs. “There’s a lot of back and forth between the voice and the violin. It’s great to be able to explore that with Joshua,” Martinez said.

The soprano added that a program such as this needed to include some Puccini. “I’m singing Musetta’s Waltz (from La bohème) while Joshua plays the orchestra part on the violin. It’s arranged for us and we have so much fun with it — it’s something that we do in our house parties.”

“It is a little funny that I’m playing “O mio babbino caro” (from Gianni Schicchi), Bell noted. “But it’s a piece that works very nicely on the violin. I think I put that on my album called “The Romance of the Violin” many years ago in a different version. I was recently asked by a friend to play some Puccini at their daughter’s wedding — so I revisited it and created a new version.”

Rounding out the program will be music from West Side Story. “Again, this is a piece that I stole for the violin,” Bell said. “I did an arrangement twenty years ago because I love that repertoire. And Larisa, being the perfect Maria, we always thought it would be great to find a way to do it together. It’s very sweet, it works really well, and it’s a fun way to end the evening.”

Bell and Martinez agree that this program is something that will continue over time. “This is just the beginning for us,” the violinist said. “In fact, this format — a full-length concert with piano —  is a first for us, so we’ll see where it goes.”

The soprano said that although it took some time to find enough music to make up an entire program, it’s going to be an ever-evolving process. “We’re always looking for more pieces, but we’re married for life, and this too will be a life-long exploration.”

In spite of their busy performing schedules, Bell and Martinez make time to advocate for Arts Education and are both part of Turnaround Arts. Founded by Michelle Obama, the program uses the arts to create success in underperforming schools.

“As a Turnaround artist you get to go to the schools and talk to the kids,” Martinez said. “They ask you what you do and about classical music. They ask questions like ‘if I want to do that, how do I do it?’ It opens up a whole new world for them. It’s not about making all of the kids become artists, but opening up their minds to that world. It helps with their emotional intelligence and resilience in the face of adversity. It helps us, the artists, too. I don’t know what I would have done if I didn’t have music as a creative vehicle during these difficult times.”

Bell said that Turnaround Arts is a fantastic organization but noted that he is also involved in the New York City-based organization Education Through Music. “I’ve always tried to lend myself to causes that champion music education for young people. I think that’s where we should be focusing our resources when we talk about the future of music. If we want classical music especially to continue to be part of our culture, that is where we need to start.”

The violinist said that he is alarmed to see music programs continue to disappear from schools. “They don’t value music education, when in fact the schools that I think are clever use music as a very important part of the education for the kids. Music is such an incredible vehicle for launching everything from mathematics to language.”

Bell explained that Education Through Music creates music programs for some of the more challenged neighborhoods and schools.“I’ve seen the effects that these programs have had on the schools and the community. The general attendance shot up dramatically, and the kids have a focus, a self-esteem. It’s just so touching to see the effect on schools that didn’t have music before. Parents should demand that music not just be a little elective after school. It should be part of our education — it’s an important part of being a human being.”

Jackson began the program with a recitation of Langston Hughes’ poem “Helen Keller” — the first of five poems by Hughes that served as interludes between each piece on the first half. END_OF_DOCUMENT_TOKEN_TO_BE_REPLACED

Pianos with pins and tape on strings, a bass drum and tam tam, crotales, Almglocken, and vibes. Microphones were hooked up all around the instruments. The feed was sent to speakers around the room. Lighting designer Nicholas Houfek hung incandescent globes over the arrangement of instruments from thin black wires stretching across the beams. END_OF_DOCUMENT_TOKEN_TO_BE_REPLACED

From the podium, Elim Chan set an ambitious tone for the evening. The rising star conductor, here in her Cleveland Orchestra debut, has a commanding style, and every twist and turn in Saturday’s performance tracked closely with her baton. END_OF_DOCUMENT_TOKEN_TO_BE_REPLACED